Triggering a showdown — Government of Mexico v. Central Bank — over paper dollars, with ramifications in the US and globally.

The amount of “currency in circulation” – the paper dollars wadded up in people’s pockets and purses, stuffed under mattresses, or packed into suitcases and safes overseas – jumped again in the week ended December 30 to a new record of $2.09 trillion, according to the Federal Reserve’s balance sheet, where currency in circulation is a liability, not an asset. This was up by 16%, or by $293 billion, from February before the Pandemic. The amount has doubled since 2011: 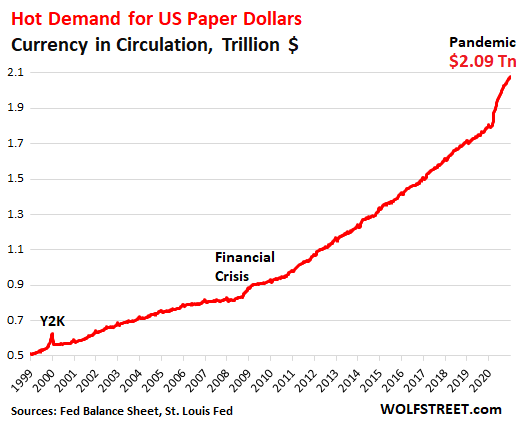 This amount of currency in circulation is a function of demand – and that demand has been red hot: US Banks have to have enough paper dollars on hand to satisfy demand at ATMs and bank branches. Foreign banks will also request paper dollars from their correspondent banks in the US, or return unneeded cash to them.

When there is demand for paper dollars, banks buy more of them from the Fed. They pay for them usually with Treasury securities they hold or with excess reserves they have on deposit at the Fed.

The surge of paper dollars is a sign of hoarding, not of increased payments. In the US, the share of paper dollars for payments has been declining for years, replaced by electronic payment methods, such as credit and debit cards, PayPal, Zelle and similar systems, all kinds of smartphone-based payment systems, the automated clearinghouse (ACH) system, and checks every now and then.

During periods of uncertainty, people load up on cash, as they have done leading up to Y2K, during the Financial Crisis, and now during the Pandemic.

But much of the hoarding of US dollars takes place overseas, with demand for those paper dollars then winding its way to the US banking system via the correspondent banks. These paper dollars also lubricate all kinds of corruption, drug trafficking, and other activities – and laundering this cash is a big profitable industry.

But these paper dollars overseas can pose their own challenges, such as in Mexico where the Bank of Mexico is now facing off against the government over the paper dollars at a Mexican bank that can no longer unload them.

Here is Nick Corbishley’s report on this paper-dollar showdown in Mexico:

These paper dollars appear to be causing all sorts of headaches for one of Mexico’s biggest domestic lenders, Banco Azteca, which is sitting on a growing mountain of dollar bills. But the bank’s owner, Ricardo Salinas Pliego, is Mexico’s second richest man and wields a lot of influence, particularly with Mexico’s current government. Three weeks ago, the government unveiled a new draft law that will force Bank of Mexico (Banxico for short) to become <u>the buyer of last resort</u> of U.S. dollars that commercial banks cannot return to their country of origin. Banxico would be forced to buy those paper dollars, regardless of how these banks had obtained them.

Defenders of the law say it would help Mexicans shut out of the financial system, such as illegal migrants and hospitality sector workers paid in dollars, to save cash. They also argue that it is necessary after a crackdown on money laundering in the US led some U.S. banks to cut ties with their Mexican counterparts, which are now struggling to offload their surplus paper dollars.

But the law’s critics, including Banxico’s Deputy Governor Jonathan Heath, argue that it could undermine the central bank’s independence and risked tarnishing Mexico’s reputation with international financial authorities. Plus, it is only really intended to benefit one bank: Banco Azteca.

“There are plenty of arguments against the proposed central bank reforms,” tweeted Heath. “One of the most important is that it’s wrong to change the law only for the sake of one company, especially one that has already had a run in with the SEC.”

In 2005, Salinas Pliego delisted two of his companies, Elektra and TV Azteca, from the U.S. after settling fraud charges brought by the U.S. Securities and Exchange Commission without admitting wrongdoing. In 2011, the U.S. Office of the Comptroller of the Currency investigated Banco Azteca’s ties with its then-correspondent bank in the U.S., Lone Star National Bank and unearthed numerous money laundering risks, which led Lone Star to sever its ties with Azteca.

Since then Azteca has been without a correspondent bank in the U.S. and has been unable to offload hundreds of millions of cash dollars, according to the newspaper Proceso. But that could all change if the proposed central banking reform becomes law. The draft ruling has already passed the Mexican Senate but its final passage has been held up by a storm of protest, not only from Banxico but also from other banks in the country as well as overseas financial institutions.

Moody’s warned that the reform would be “credit negative” for Mexico’s sovereign debt because it would compromise the bank’s autonomy in a country that underperforms on rule of law. Mexico currently only complies with 5 of the 40 recommendations issued by the Financial Action Task Force (FATF), the global money laundering and terrorist financing watchdog, says the head of Mexico’s Financial Intelligence Unit (UIF), Santiago Nieto Castillo.

Given the power of organized crime in Mexico, Banxico is loath to buy commercial banks’ surplus foreign cash without being able to verify its source of origin. Not only would it make it easier for the proceeds of illicit transactions to flow into Mexico’s financial system; it would mean they could end up forming part of Banxico’s international reserves. And that could expose the central bank to money laundering sanctions and even disruptions to its dollar swap lines with the U.S. Federal Reserve.

Most members of President Andres Manuel Lopez Obrador’s Morena party still believe the reform is worth pursuing, ostensibly to help Mexican migrants get dollars into the banking system. Yet according to Banxico, which tracks money entering Mexico from overseas, 99.3% of remittances arrive electronically, meaning that less than 1% arrive in the form of cash.

On Thursday, Mexico’s finance minister raised an additional objection: the draft bill “would only transfer the problem commercial banks have to the central bank because the central bank would have the same problem: how to export dollars.”

But the law’s backers have a solid majority in both branches of Congress. And they seem determined to use it.

“We are going to approve the law. This we want to make clear,” said Mexican senator Alejandro Armenta, who heads the senate’s finance committee. “We cannot put the concerns of the financial system at the center of our interests while the population suffers from the problem of exchanging dollars when they return from the United States, after working and leaving their families. We have to find a balance.”

The senator added that the bill will pass in February and will include amendments to ensure that it does not facilitate money laundering.

“What is their use if the reserves are just saved, sitting in vaults or as electronic data? The Bank of Mexico is one of the country’s institutions that has to adapt to the changes that the country needs,” he said.

Some of the law’s most strident opponents warn that its real purpose — as depicted by Armenta’s words — is as a trial balloon to gauge the reaction of monetary authorities and investors, both within Mexico and beyond, to government moves against Banxico’s independence. What Mexico’s cash-strapped government really covets, they claim, is Banxico’s $194 billion of foreign currency reserves — and they are mostly assets in electronic form, such as US Treasury securities, that can be easily sold globally.

The government, they say, has already exhausted most of its financial buffers during this year’s virus crisis. Yet it needs to find more money to maintain its social welfare programs and continue supporting struggling state-owned oil giant Pemex. And the last thing it wants to do is to significantly increase Mexico’s public debt load, which would make the economy more vulnerable to macroeconomic risks. Hence the move by the government on Banxico’s reserves.

The dollar’s share of global reserve currencies declined again. But other options are also shaky. Central banks are leery of the Chinese RMB, and its share is still irrelevant. The euro’s share is stuck. But the yen’s share has been rising. Read… US Dollar as “Global Reserve Currency” amid Fed’s QE and US Government Deficits: Dollar Hegemony in Decline

241 comments for “Paper Dollars in Circulation Globally Spike amid Hot Demand. But a Mexican Bank, after Run-ins with the US, Can No Longer Unload its Hoard of Paper Dollars”