Better produce a big-fat stimulus bill pronto and keep eviction bans and forbearance going, or else these companies will face economic reality.

“The ships are 100% full. The containers are 100% full. You can’t get a container built. You can’t pick up a ship from the spot market. The whole container-shipping cycle is at absolutely full pulse,” said Jeremy Nixon, CEO of Ocean Network Express, the world’s fifth-largest container line, during an International Chamber of Shipping virtual event last week, cited by FreightWaves. October’s ocean container market is “unbelievable,” he said. “We are sold out.”

“Our job now is to keep the network going from an operational standpoint,” he said. “The ports are getting jammed up now. We’re starting to see bottlenecks in the supply chain. That’s another challenge going into this winter.”

In domestic shipping, the fear of shipping-capacity shortages has crept into the calculus, and carriers are raising their rates, and shippers, such as retailers and manufacturers, are willing to pay.

FedEx and UPS have told some of their largest customers that most of their capacity is already spoken for, retailers and shipping consultants told the Wall Street Journal. Any extra trailers with holiday orders would have to wait, they were being told.

LaserShip and DHL eCommerce Solutions told the WSJ that they booked up their holiday capacity months earlier than normal and would no longer take new customers until next year.

Shipment volume in the US in September jumped 7.1% compared to August, according to the Cass Freight Index for Shipments, which tracks freight by truck, rail, and air, with a concentration on trucking. This comes after volume had already jumped 8.0% in July, reversing the brief plunge during the Pandemic and much of the shipping recession from late-2018 till the Pandemic.

Shipping volume almost caught up with September last year (-1.8% year-over-year), the 22nd month in a row of year-over-year declines, during which numerous trucking companies filed for bankruptcy, some of them after a messy collapse, that took some capacity off the road.

This stacked chart going back to 2009 shows how far shipping volume had already fallen by January and February 2020, how it plunged in April, and the surge since then (red line): 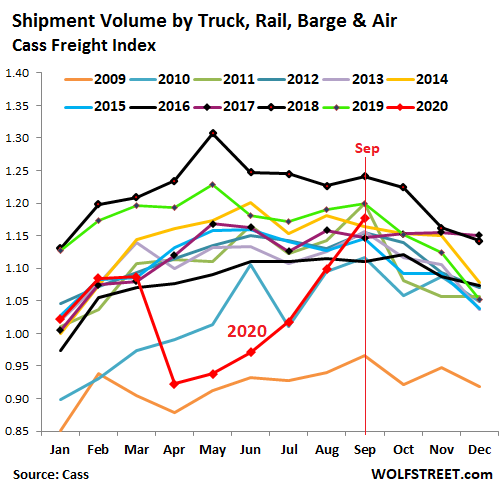 In January, shipping volume had plunged 9.4% year-over-year compared to the already weak January a year earlier, the steepest year-over-year decline since October 2009. Then the distortions of the Pandemic began, amid consumer panic buying of some items and demand shifting to households away from offices, restaurants, other businesses, and schools, with demand collapsing in those sectors.

Anything having to do with ecommerce boomed, while some segments of brick-and-mortar retail got clobbered. Carriers and supply chains where overwhelmed on one end, even as demand collapsed on the other end. 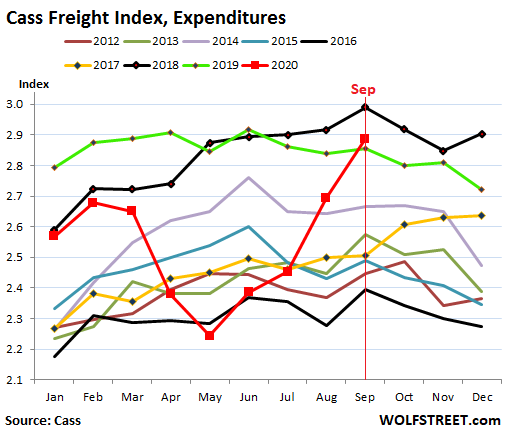 This comes as an enormous number of people are still losing their jobs every week, even while others are getting hired back, and while over 25 million people are still claiming unemployment insurance under state or federal programs, according to the Labor Department.

And retail sales of goods online and in stores rose to a new high, under the new requirements of working at home, learning at home, going to the gym at home, making coffee at home….

But this spending and the shift early on in the Pandemic put massive pressures on unprepared supply chains, and retailers ran out of stuff, and supply chains ran dry, and now companies, haunted by supply shortages and lost business and increased lead times and chaos, are trying to load up for a monster stimulus-fed holiday shopping season.

Everything now depends on stimulus, extra unemployment benefits, eviction bans, foreclosure moratoriums, forbearance, and deferral programs that all rechannel funds into purchases of consumer goods, and a lot of these goods, or their components, are imported. Somebody better produce another big-fat stimulus bill and keep eviction bans and forbearance programs going, or else these companies will face economic reality.