My Big-Four Bank Index already got crushed back to 2004 level.

After the stock market closed today, the Federal Reserve announced that “in light of the economic uncertainty,” and to provide “a cushion against loan losses,” and to support lending, it would extend for another quarter, so through December 31, the blanket prohibition on share buybacks by large banks (banks with over $100 billion in assets). For the same reasons, it would also cap dividend payments tied to a formula based on recent income.

The Fed said that according to a stress test and additional analysis, whose results were released in June, “all large banks were sufficiently capitalized” to deal with the fallout from the Pandemic.

But it appears that the Fed now thinks the banks need to be even more sufficiently capitalized, so to speak, to deal with whatever may be coming at them. And the Fed will conduct another stress test later this year.

Many banks had voluntarily halted share buybacks in March as all heck was breaking loose. In June, following the release of the stress test results, the Fed imposed the buyback prohibition for the third quarter, now extended through the fourth quarter.

So, let’s put it this way: As far as the Fed is concerned, this crisis is not a blip, and banks need to be prepared for what’s coming at them. The large banks have already set aside billions of dollars each to deal with the fallout on their loan books. But apparently, the Fed thinks there’s more to come.

The thing is what’s coming at the banks has been largely put on ice, but that’s just temporary ice, not permanent ice: Credit-card loans, auto loans, mortgage loans, commercial real estate loans, and other loans have been moved into deferral or forbearance programs, often after they were already delinquent, where the borrower doesn’t make payments for the term of the program, and the bank can still book the loan as “performing.”

These loans on ice are now everywhere. Many of them have been securitized and the problem has been moved on to servicers and investors. Many of the residential mortgage-backed securities with mortgages on ice have been placed into the government’s lap. So those are not for banks to worry about.

But banks still hold a considerable portion of loans on their books, and some of those loans are now in deferral and forbearance programs, and banks will have to deal with them eventually.

There has been a spectacular number of bankruptcies among brick-and-mortar retailers and in the oil & gas sector. Other sectors saw some bankruptcies too, but not to that extent. Overall, consumer and business bankruptcies have not spiked as they would have given the magnitude of this crisis because of the enormous amount of stimulus money, unemployment benefits, small business support programs (PPP loans), and large business support programs, including for the airlines.

Then there were the Fed’s asset purchases and direct lending programs that whipped the credit markets into frenzy, and nearly all companies were able to borrow in the market, even airlines, cruise lines, and move theater chains whose businesses got totally crushed. By being able to borrow in this frenetic market, they averted near-certain bankruptcies.

But these support programs have already ended or will soon end. Even the mortgage forbearance programs, though extendible, are on a timer. And the Fed only dabbled in the corporate bond market, buying only about $12 billion in bonds and bond ETFs, but stopped buying bond ETFs in July and bought almost no bonds in August, and likely wound down that program entirely in September.

Credit markets are still in a state of frenzy, and issuance of investment-grade and junk bonds has hit all time highs under insatiable investor demand, who are frantically chasing yield.

But the Fed is telling banks, get ready, you’re going to have to face the loans that are now on ice, and your borrowers are going to come under more pressure, and this is going to drag out.

The stocks of US banks have already been getting battered. The KBW Bank Index is down 36% year-to-date.

JPMorgan Chase [JPM] is down 32% ytd. At $96.27 today, it’s back where it first was in October 2017. Having about doubled since the peak before the Financial Crisis, it’s the least-dirty shirt of the batch. 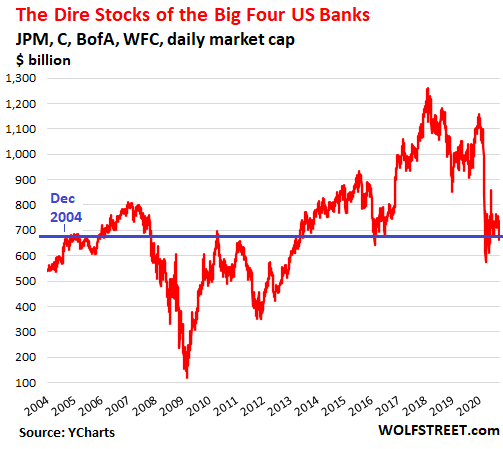 78 comments for “What Does the Fed See Heading at Big Banks? Blocks Share-Buybacks, Slaps on Dividend Caps Due to “Economic Uncertainty” and “Cushion Against Loan Losses””