The formerly hot asset class was already troubled by a multiyear decline in student enrollment and a surge in upscale supply.

“Student housing,” a subcategory of multifamily housing (apartments) in commercial real estate, is now dealing with an existential crisis – similar to retail and lodging. The mortgages backed by this once a hot asset class have been packaged into commercial mortgage-backed securities (CMBS) and sold to investors. Students aren’t exactly stable tenants. And the risks are high even in the Good Times.

Delinquency rates of 30-plus-days on the student-housing mortgages that back $4.7 billion in “private label” CMBS (not backed by Fannie Mae or Freddie Mac) started surging in 2019, and by January 2020 hit 10%, under the impact of oversupply of student housing, particularly the trend to “luxury student housing,” that came along with the eight-year trend of declining student enrollment. And then the Pandemic washed over student housing. 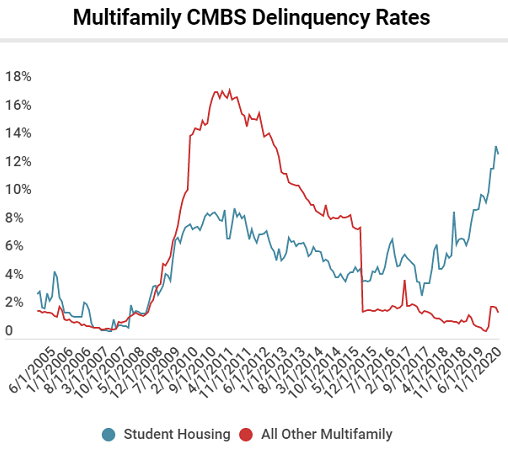 The straight-down plunge in the delinquency rates of all other multifamily housing types in early 2016 was in part the result of the $3-billion delinquent loan, backed by Stuyvesant/Peter Cooper Village in New York City, being resolved after Blackstone and Ivanhoe Cambridge purchased the property.

By August, $1.6 billion in mortgages backed by 101 student housing properties have requested or were already granted COVID-19 financial assistance.

Student housing is built on the foundation that students live on or near campus, and not at their parents’ place. For many people, it’s the first time living away from the parental umbrella, and it’s a blast. Or was a blast. Now colleges are struggling with the pandemic.

For example, one of the largest mortgages among these troubled student-housing mortgages that was granted forbearance, according to Trepp, is the $82.6-million loan, secured by The View at Montgomery, near Temple University, in Philadelphia, PA. In addition, the property secures a $9.8-million Agency mortgage that was packaged into a government-backed CMBS.

On September 3, Temple University announced that “in-person course instruction” has been suspended for the fall semester. This is what a now largely useless apartment at The View at Montgomery looks like — because you’ve got to have a nice place to live when in college: 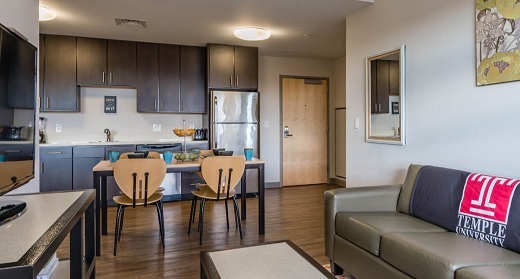 78 comments for ““Remote Learning” Sinks Student-Housing CMBS, After Delinquencies Had Already Spiked in 2019”