CMBS delinquency rates for retail properties spiked to 18% and for hotel properties to 24%.

The delinquency rate for Commercial Mortgage Backed Securities (CMBS) spiked by 317 basis points to 10.3% in June, after having spiked by 481 basis points in May, which had been the largest month-to-month spike in the data going back to 2009, according to Trepp, which tracks securitized mortgages for institutional clients.

Another 4.1% of the underlying loans missed the June payment deadline. Because they’re not yet 30 days past-due – they’re marked in “grace” period or “beyond grace” period – they’re not yet included in the delinquent pile. A loan that is in the “grace” period or in the “beyond grace” period could revert to “current” in July without a payment being made, if the borrower enters into a forbearance agreement with the loan servicer. If the borrower fails to obtain a forbearance agreement, the loan will be added to the pile of 30-plus days delinquent loans: 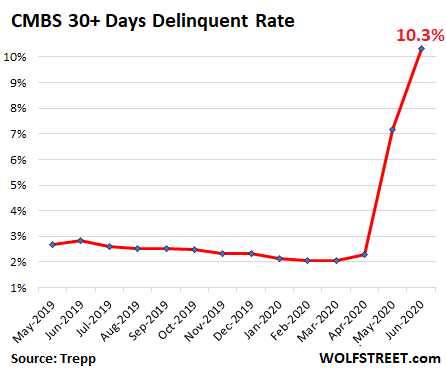 Trepp suggested that this still might get a little worse, but more slowly, and not much worse. “So perhaps we have reached terminal delinquency velocity,” as the report put it, where “most of the borrowers that felt the need for debt service relief have requested it.”

In other words, borrowers that made it through April, May, and June without becoming delinquent have a good chance of being able to weather the storm, according to this theory.

But this theory will be challenged by the meltdown of retailers that continues despite the reopening of malls — more on that in a moment.

Commercial mortgages have a balloon payment at the end of the term, and when the loan matures, the balloon needs to be paid off or be refinanced. But when this becomes impossible, “maturity defaults could still be an issue,” Trepp said. “If that is the case, the expectation would be that the increases in the delinquency rate going forward should be smaller than what we saw in May and June.”

By property type: Retail and Lodging loans are getting crushed.

Industrial property loans, such as for warehouses, are the best-performing category with a delinquency rate of 1.57% in June. Ecommerce was one of the biggest beneficiaries of the pandemic and the lockdowns, as much of non-grocery brick-and-mortar retail sales, and even some grocery sales, shifted online. Retailers, such as Macy’s and Nordstrom, whose stores were closed, reported soaring ecommerce sales. And the brick-and-mortar part of ecommerce, the fulfillment centers, remain in high demand.

Office property loans are experiencing still low delinquency rates, though they ticked up in June to 2.66%, from 2.4% in May and 1.92% in April.

Multifamily loans (apartment buildings) are experiencing moderately rising delinquency rates, at 3.29% in June – up from 2.11% in June last year.

Retail property loans – this is the brick-and-mortar meltdown and includes many loans backed by malls and outlet properties – are getting crushed: 18.07% were delinquent in June.

Even though many malls have reopened, many stores in them remain closed, numerous large retailers filed for bankruptcy protection, and the whole industry, which saw much of its sales wander off to ecommerce, is in perma-decline. This has been going on for years, but the Pandemic compressed several future years of continued meltdown into half a year now.

Hotel property loans are the worst hit as much of the travel industry has shut down. The delinquency rate spiked to 24.3% in June, and the sector remains in turmoil, with many hotels still closed (delinquency rates by Trepp): 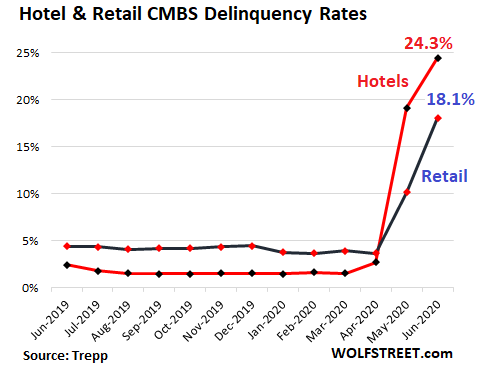 Many hotels that are now closed will eventually re-open, and those that are now open, will eventually see their occupancy rates rise from the current fiasco levels. But the glory days, especially for business travel – the most lucrative segment for hotels – may well be gone, and it will be a tough slog going forward.

Some retailers are being liquidated and will close all their stores. This includes Pier 1. Many retailers that haven’t yet filed for bankruptcy have unilaterally declared that they will not pay rent while their stores are closed. This includes Gap. And then, without rent payments, there is no hurry to re-open stores even at malls that have reopened.

Other retailers, such as Nordstrom, told landlords that they would cut the amount in rent they’d pay. In Nordstrom’s case, it had told the landlords of its department stores and Rack stores that it would only pay half of the occupancy costs for the rest of the year, according to Retail Drive, which obtained a copy of the letter. Nordstrom had already announced the permanent closure of 16 stores, and those landlords are out of luck.

Department stores serve as anchors at the malls. With them gone, foot traffic at the mall declines further and causes other retailers to close their stores. And when retailers disappear or don’t pay rent, landlords eventually fall behind on servicing the mortgage.

In addition, many retail properties are so bogged down in shuttered stores and stores that stopped paying rent — amid retail property valuations that plunged in recent years — that when the loan matures, the landlord has trouble refinancing the property to pay off the balloon. This would trigger the above mentioned “maturity defaults.”

These mortgages are held by banks, insurance companies, and other institutional investors, and they’ll be busy sorting through this, foreclosing on properties, and tabulating losses. And some of these mortgages have been sliced and spread over many CMBS, and those slices are now defaulting in large numbers.

The problem with retailers is structural. The Pandemic compressed three future years of brick-and-mortar meltdown, that the industry could have dealt with more adequately, into just a few months. Unlike other industries, brick-and-mortar retailers – clothing stores, department stores, outlet stores, specialty stores, even shoe stores – will not recover to the already beaten-down levels before the Pandemic. During the Pandemic, another big chunk of their sales has permanently shifted to ecommerce, and there will be little relief for landlords, such as mall REITs, and for CMBS that contain these mortgages.

In the area of apartment rents, the impact of the Pandemic is already showing up. Read... Massive Shifts Underway, Rental Market Reacts in Near-Real Time: Rents Plunge in San Francisco & Oil Patch, Drop in Expensive Cities. But Long List of Double-Digit Gainers