Other places so dependent on tourism face a similar fiasco. But Macau had already been badly hit by China’s crackdown on corruption and capital flight.

Just how hard economies that mostly depend on tourism – and everything related to it – have gotten hit from the Chinese travel restrictions, and from travel restrictions more broadly, is exemplified by Macau whose economy depends largely on gaming: Not only gaming revenues, but also hotel bookings, restaurants, entertainment, fancy retail shops for tourists, money laundering services and other financial services, etc., plus all the secondary and tertiary activity associated with them, such as the salaries spent by employees for food and rent and what not, and how this money then circulates.

So when gaming revenues collapsed because the casinos were shut down, and because tourism from Mainland China had halted, and the secondary activities also swooned, overall economic activity collapsed by half – and we’ll get to that in a moment.

Gaming revenues in April were down 79% from April last year to 2.04 billion Macau pataca ($250 million), after having collapsed by 85% in March, to just 1.25 billion pataca, according to Macau’s statistics agency DSEC. At the peak in March 2014, gaming revenues reached 14.5 billion pataca. While revenues have ticked up just a bit in April from March (see that little hook), and are expected to tick up in future months, they’ll remain far below where they used to be: 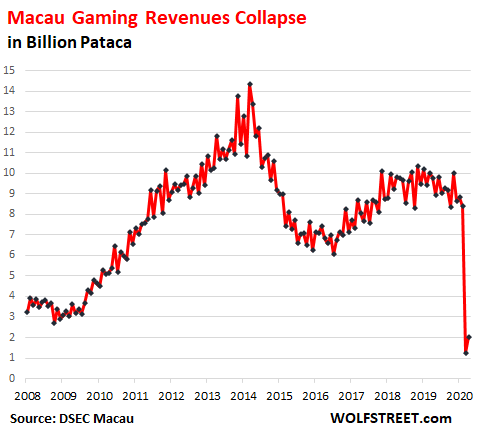 Macau’s gaming industry had been struggling, to put it mildly, since the peak in March 2014, after which China’s crackdown on corruption and its subsequent crackdown on capital flight did a job on Macau.

It is the only place in China where the Chinese can legally gamble. And it was a convenient place to circumvent China’s currency controls and siphon money out of China and send it out of harm’s way, by, for example, investing it in a house in the US or Canada. A whole industry had sprung up in Macau to make this convenient.

But the crackdown on corruption scared high-rollers away. And the subsequent crack-down on capital flight gave people a big reason not to go to Macau and find other avenues. GDP started dropping in 2014 and continued to decline until Q2 2016.

Then in Q1 2020, while still struggling to slow down the structural decline stemming from the crackdown on capital flight, Macau’s gambling revenues and therefore the entire economy got hit by the travel restrictions and the shutdown of casinos. GDP collapsed to 54.4 billion pataca: 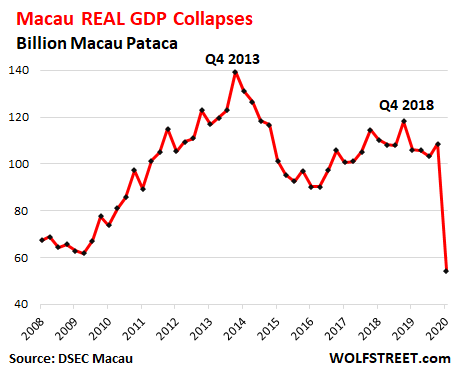 To put that into perspective in terms of how US headlines tend to look at US GDP. In the US, the Bureau of Economic Analysis releases GDP data in various forms, including non-annualized as in Macau, and “annualized,” as shown in the US headlines. Annualized GDP growth means that essentially the quarter-to-quarter percentage change is multiplied by four to give you the annual rate.

The chart below shows Macau’s GDP percentage change (not annualized), compared to the same quarter a year earlier: 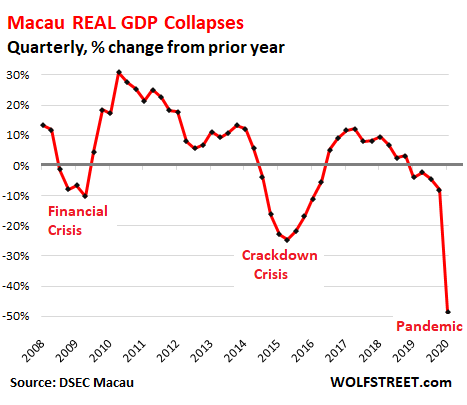 There are other cities and small countries that are extremely dependent on tourism in all its forms. And they’re facing a similar economic fiasco as Macau.

Never let a good crisis go to waste. US production, 4th in the world, plunged 32% in April. India’s production, normally in 2nd place, collapsed 64%. Read... Crude Steel Production: China Blows the Doors off Rest of the World During Pandemic After Already Huge Surge in 2019