“Builders are wanting extensions on their accounts. Builders are asking for better margins. Buyers are down by 50% to 60%. Employees are scared and do not want to work. Everything we do is taking twice as long.”

The down-to-earth comments from executives of manufacturing companies in Texas show how the economy has diverged: Many segments are in a fall-of-the-cliff downturn while a few other segments have seen a sudden boost they suspect may not last. This divergence is one of the takeaways – beyond the fall-off-the-cliff movement of the indices – from the Dallas Fed’s Manufacturing Outlook Survey released this morning.

The surveys were collected between April 14 to 22 from executives of 115 unnamed Texas-based manufacturers of all sizes. They track how executives are viewing various aspects at their own businesses.

Of the executives, 64.5% said that their companies experienced a decline in production in the current month – by far the most ever. Only 9.2% said that their companies had experienced an increase (but they did experience an increase; more on that in a moment). This caused the production index, a key measure, to plunge from -35.3 in March to -55.3 in April, a historic low, blowing by the Financial Crisis low of February 2009: 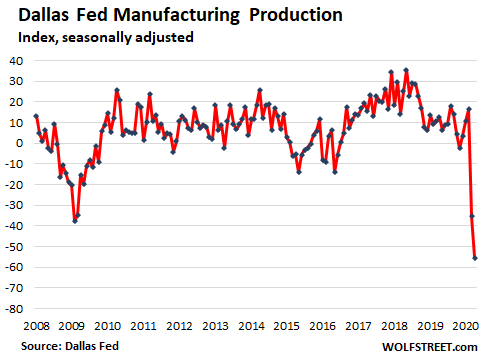 In terms of new orders, 72.2% of the companies experienced a decline, by far the most ever. It demolished the record low of December 2008 (55.7%). This caused the index for new orders to collapse by another 26 points from March, to -67 in April, the lowest in the survey data going back to 2004. It makes the Financial Crisis of 2008-2009 look tame in comparison: 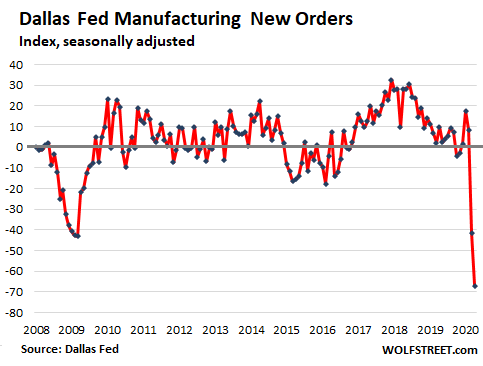 The General Business Activity Index, which tracks how the executives perceived the broader economy, had totally collapsed in March. In April, it dropped further to -73.7, a new historic low. 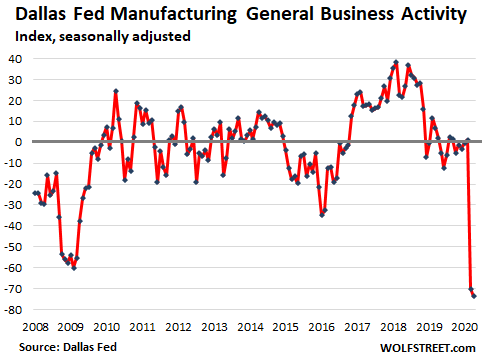 The labor market is rough. The index for hours worked plunged 18 points to -40.2, “signaling a notably reduced workweek length.”  And staff cutting continues nearly unabated: 24.1% of the companies said they cut staff in the current month, and only 2.9% said they added staff. This left the employment index at a dismally sharp decline: 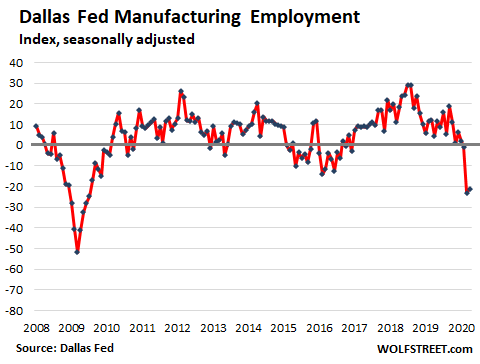 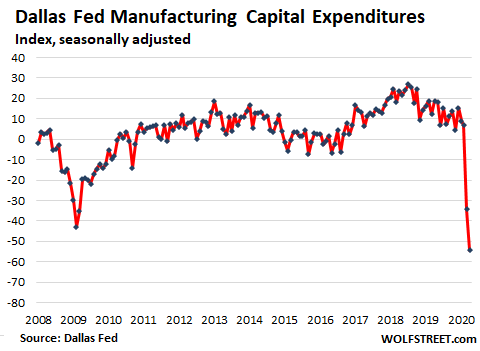 In the comments, many of the executives outlined how their companies were feeling the full brunt of this lockdown, and how they’re trying to deal with it. But some companies in other sectors – such as food and computer equipment – got a boost even if they suspect that it won’t last. Here are some highlights:

Comments by businesses that got hit hard:

Chemical Manufacturing: “We have no visibility on orders and sales demand more than 30 days out. It is a highly uncertain and depressed overall business environment.”

Nonmetallic product manufacturing: “With 22 million new unemployment claims in the last four weeks and others underemployed, there will be a decline in construction/housing demand that will cause job losses not seen today.”

Primary metal manufacturing: “We continue to see customers push orders for large capital projects out. Although we have not experienced any major cancellations, the incoming order log has decreased by 62% since January, setting the stage for a long and tough second quarter.”

Machinery Manufacturing: “Sales are down nearly 50% due to COVID-19.”

Machinery Manufacturing: “We have a very negative outlook for the rest of the year as oil prices have plummeted significantly. Our quoting has been halved, and we are deeply concerned going forward.”

Transportation Equipment Manufacturing: “[W]e have reduced everyone’s working time and salaries for a while in the hope of keeping everyone employed and seeing a rebound in business activity within the next couple of months. We do not expect to see a full recovery for a long time in the aviation industry, and we will keep a much-reduced level of activity and investment at least for the remainder of 2020.”

Wood Product Manufacturing: “Things are looking bad. Builders are wanting extensions on their accounts. Builders are asking for better margins. Buyers are down by 50% to 60%. Employees are scared and do not want to work. Everything we do is taking twice as long.”

Miscellaneous Manufacturing: “We are 43% automotive in North America and Europe. It is dramatically affecting our business level downward. OEM [original equipment manufacturer] automotive has not been producing since mid-March, with uncertain dates to return to production.”

Companies that got a boost or least avoided taking a hit:

Fabricated Metal Manufacturing: “Plant employees are wearing masks, taking their temperatures every day, and working six-plus feet apart. The lunchroom was expanded to allow more room between all employees. Office employees are working mostly out of their homes. Overall, the virus has caused a lot of stress, but business and the health of our employees have not declined.”

Food Manufacturing: “We have two businesses: pet food manufacturing and feed manufacturing. Consumers are apparently stockpiling pet food such that our volume was up 23% in March and we are behind schedule in making shipments. Conversely, our feed volume was down 9% as we believe ranchers are hoarding cash and buying less cattle feed as the warm spring weather is producing nice pastures for the cattle to graze on.”

Food Manufacturing: “We’re in the food business. There is increased demand, but it’s not clear if it will be sustained.”

Commercial mortgage-backed securities (CMBS) get to eat it all: And amid overvalued vacant collateral, there is a new thingy: Tenants delaying rent payments and landlords asking for forbearance. Read… How the Unicorn Blowup & Oil Bust Bleed into Commercial Mortgage-Backed Securities