The Fed has now moved into wait-and-see mode after cutting its policy rate for the third time in this cycle, this time to a range between 1.5% and 1.75%, while praising the “strong” labor market, which supports “strong” consumer spending, which is 70% of the economy. This is one of the key aspects that emerged from the minutes of its most recent meeting on October 29-30.

The Fed’s concern over trade tensions cannot be addressed with rate cuts anyway because rate cuts in the US are patently ineffective in inducing Chinese or German companies and consumers to buy US-made goods, and are equally ineffective in producing trade deals.

In theory, rate cuts might induce businesses to invest more – and business investment is one of the admitted weak points in the US economy at the moment – but rates faced by businesses were already low to begin with, and slightly lower rates won’t make a noticeable difference in decision making if businesses don’t see the need to invest, such as demand.

The weakness was in the industrial sector, including manufacturing, the meeting minutes pointed out. But consumer-facing businesses reported “strong demand.”

And so the FOMC meeting minutes came up with this wait-and-see statement (underscore added):

With regard to monetary policy beyond this meeting, most participants judged that the stance of policy, after a 25 basis point reduction at this meeting, would be well calibrated to support the outlook of moderate growth, a strong labor market, and inflation near the Committee’s symmetric 2 percent objective and likely would remain so as long as incoming information about the economy did not result in a material reassessment of the economic outlook.

This confirms what Fed Chair Jerome Powell had said in the post meeting press conference.

And it is showing up in my fancy-schmancy “Fed Hawk-o-Meter.” It analyzes the minutes for how the Fed sees the economy, by counting how often “strong,” “strongly,” and “stronger” appear in the minutes to describe the economy. For the October meeting, the Hawk-o-Meter rose 3 points (to 23), and importantly – ha, don’t take my Hawk-o-Meter too seriously – the three-month moving average ticked up for the first time since its down-movement started with the December meeting last year: 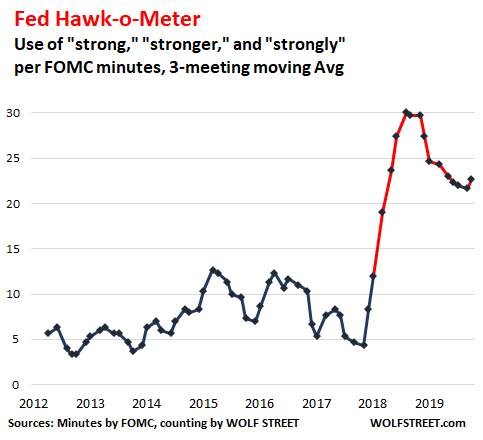 The words “strong,” “strongly,” and “stronger” appeared 24 times in the minutes of the October meeting. But one of them was a “false positive,” dealing with the purchases of Treasury bills and not the economy. So I removed it from the tally, leaving 23. This was up from 20 in the minutes for the September meeting.

The labor market was front and center of the Fed’s assessment of the strength of the economy, with 12 of the 23 counters of “strong” describing the labor market.

Some examples how “strong,” “stronger,” and “strongly” were used:

What Powell had called a “mid-cycle adjustment” at the meeting following the first rate cut has now apparently turned into a mid-cycle wait-and-see rather than a serial rate-cut binge.

The fear that central banks with low or negative interest rates will be helpless in face of the next economic crisis has made it into the Fed’s Financial Stability Report for the first time, and with a fairly new term. Read… Fear of “Reversal Rates” Sets in, Says the Fed

21 comments for “Fed Switches from Mid-Cycle “Adjustment” to Wait-and-See, Pending “Material Reassessment” of its Economic Outlook”