But rents surge in 22 other markets by the double-digits.

Southern California – sampled here by Los Angeles, San Diego, Santa Ana, and Long Beach – has decidedly entered the list of big and expense rental markets where apartment rents are on the decline. Other decliners from their prior peak rent, in some cases years ago, include San Francisco, San Jose, Seattle, New York City, Chicago, Honolulu, and Miami. In terms of two-bedroom asking rents, seven of these cities booked double-digit declines from their prior peak, including -26% in Honolulu and -33% in Chicago.

San Francisco rents had peaked in October 2015 and then fell almost 10% before the “Trump bump” infused new energy into housing in the Bay Area. This caused rents to rise again, with 1-BR rents beating by a hair the Oct. 2018 high, and 2-BR rents getting close, but no cigar. In June this year, this energy petered out.

In San Francisco, as in many cities in the US, there is a lot of supply of newly or recently built rental units – rental apartments and condos for rent – but it’s nearly all high-end. And as landlord are trying to fill these units, they’re pressuring rents from the top down.

In Chicago, where the housing market is facing the structural challenges of a slowly declining population and plenty of new construction, the median asking rent for 1-BR apartments, at $1,450, has plunged 29.3% from its peak in October 2015; and for 2-BR apartments, at $1,780, it has collapsed by 32.8% from the peak in September 2015.

In the table below of the 17 most expensive major rental markets in the US by median asking rents, the shaded areas indicate peak rents and the changes since then. Note that three cities – Boston, Oakland, and Fort Lauderdale – set new highs in October: 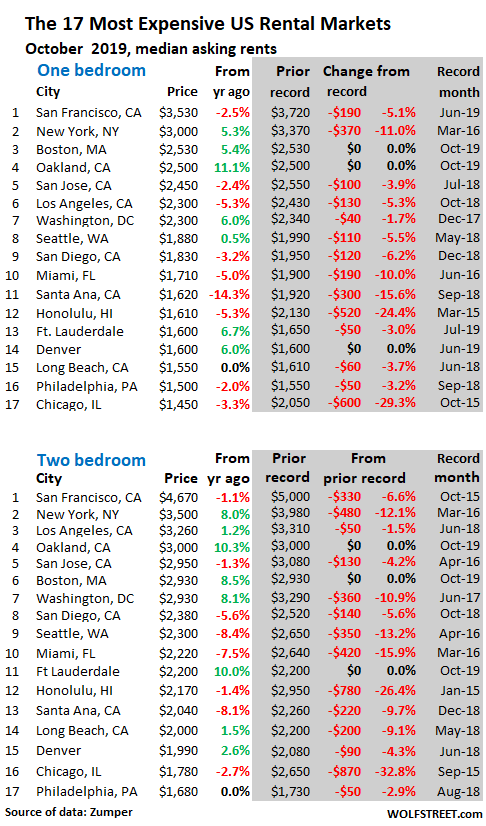 The data is collected by Zumper from over 1 million active listings, including third-party listings at Multiple Listings Service (MLS), of apartments-for-rent in apartment buildings, including new construction, but not single-family houses or condos for rent, in the 100 largest markets. Rents do not include incentives, such as “one month free” or “free parking for three months.”

“Asking rent” is the amount the landlord advertises in the listing. It’s a measure of the current market for people who are looking to rent. It is not a measure of the rents that long-time tenants actually pay. “Median” means half the advertised rents are higher, and half are lower. Rooms, efficiency apartments, and apartments with three or more bedrooms are excluded.

The Cities with the biggest percentage rent increases:

Boston also had sharp rent increases and set new records. Other cities in the table above –including Fort Lauderdale, Washington DC, and New York – had sharp increases but the latter two remain down from their peaks years ago.

Below is a table of the 25 rental markets of the 100 major rental markets that in October had the biggest year-over-year percentage increases in median asking rents for 1-BR apartments. Of these 25 markets, 22 experienced double-digit rent increases (if your smartphone clips the sixth column, hold your device in landscape position):

The Cities with the biggest percent rent decreases.

As we have seen in the most expensive rental markets, rents go up and they go down. The table below shows the 26 rental markets among the 100 major rental markets that in October had year-over-year decreases in median asking rents for 1-BR apartments. Four of them had double-digit drops, including Houston (if your smartphone clips the sixth column, hold your device in landscape position):

Yup, of the 100 largest rental markets, 26 had declining rents. But 74 had rising rents or stable rents, and so overall, on average, rents in the US have increased year-over-year. According to Zumper’s National Rent Report, the median asking rent for 1-BR apartments across the US in October rose 2.5% to $1,237 and for for 2-BR apartments, it rose 2.6% to $1,480.

Below is Zumper’s list of the top 100 most expensive major rental markets, in order of 1-BR asking rents in October, with year-over-year percent changes. As you can see at the bottom of the list, median rents in the $700 range exist in the US, in some nice cities too. You can use your browser’s search function to find a city (if your smartphone clips the sixth column, hold your device in landscape position):