The Fed did a lot of heavy breathing over “trade uncertainty” and “trade tensions” during the September 17-18 FOMC meeting, according to the minutes, released this afternoon. The word “trade” was mentioned 26 times in the minutes, in phrases like these:

By making the “trade tensions” front and center of its economic picture, it’s sending a big-fat message with these minutes to the White House, on top of the messages Fed Chair Jerome Powell and Fed governors have already sent in their speeches, and on top of the messages sent in prior minutes, saying, look, this is your creation, there isn’t a whole lot we can do about it if you don’t get this resolved soon, and we’re washing our hands of it.

The word Brexit was used three times, lumped in with a long laundry list of the other international entanglements, such as:

“…including trade tensions between the United States and China, developments in Europe, political tensions in Hong Kong, uncertainties related to Brexit, and escalating geopolitical tension in the Middle East following attacks on Saudi oil facilities.”

“Participants also noted that there continued to be a significant probability of a no-deal Brexit, and that geopolitical tensions had increased in Hong Kong and the Middle East.

The Fed has some other worries, including slow business investment, and is trying to figure out how to “promote” a more rapid dwindling of the purchasing power of the dollar.

But what matters the most — being about 70% of the economy — consumer spending is “strong” supported by a “strong” labor market. And so how does all this wash out in numbers?

My fancy-schmancy Fed Hawk-o-Meter analyzes the minutes for how the Fed sees the economy, by counting how often “strong,” “strongly,” and “stronger” appear in the minutes to describe the current economy. For the September meeting, the Hawk-o-Meter dropped 5 points, back to the same level of the July meeting, staying in the same range since the December meeting, and still above the red line.

This means that the Fed didn’t really see a lot of economic reasons to cut its policy rates, but admitted by the way it sees the economy that it cut them anyway for other reasons: 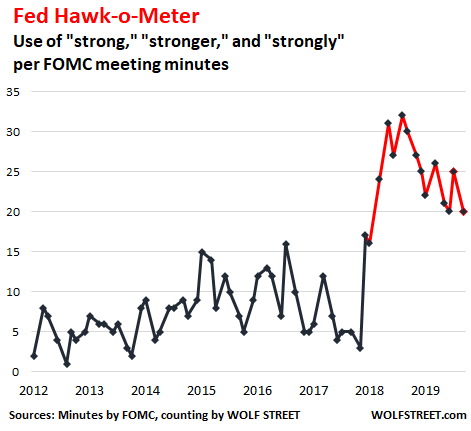 The words “strong,” “strongly,” and “stronger” appeared 23 times in the minutes of the September meeting. Three of them were “false positives” because they were used in a different context, unrelated to the current economy, or were used in a negative sense as in “slowing … from its strong second-quarter pace.” I remove the three false positives from the tally.

And there was a tidbit about markets being a little overenthusiastic about their rate-cut expectations, and how the Fed should go about nudging those expectations back on track:

“Several participants suggested that the Committee’s postmeeting statement should provide more clarity about when the recalibration of the level of the policy rate in response to trade uncertainty would likely come to an end.

And as usual by now, the “two members” of the FOMC who voted to keep rates unchanged – Esther George, and Eric Rosengren, as we know from their own statements – were concerned that cutting rates “during a period of high economic activity and elevated asset prices could have adverse consequences for financial stability.” Yup, they’re considered “hawks” for just stating the obvious.

The Fed’s balance sheet jumped by $184 billion over the past month, to $3.95 trillion, mainly a result of the New York Fed’s repo operations. Read… Repos Boost Fed’s Assets by $181 Billion