But what happens if there’s actually a recession?

The US gross national debt jumped by $110 billion on the last two business days of Fiscal Year 2019, and by a breath-taking $1.2 trillion during the entire fiscal year, after having already jumped by $1.27 trillion in Fiscal 2018, the Treasury Department reported today. This ballooned the US gross national debt to a vertigo-inducing $22.72 trillion.

These beautiful trillions whipping by are a joy to behold: so much action in so little time. The flat spots in the chart below are the results of the debt-ceiling charade in Congress. When the debt ceiling is lifted, the debt spikes back to trend, and nothing changed: 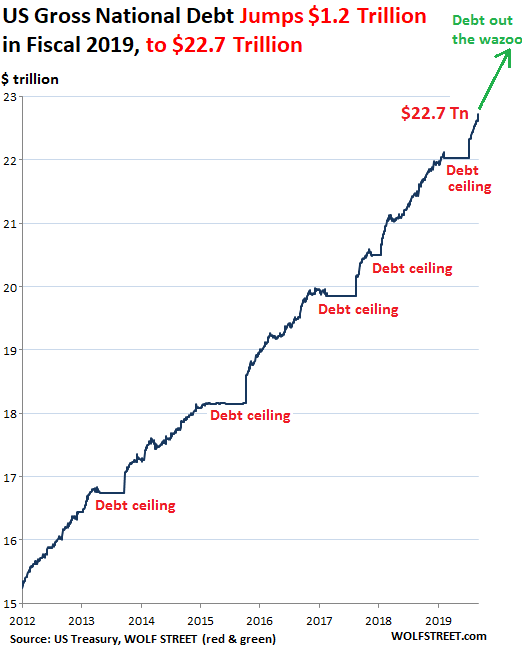 The thing to remember here is that this isn’t the Great Recession or the Financial Crisis, when over 10 million people lost their jobs and credit froze up and companies went bankrupt and tax revenues plunged while outlays soared to pay for unemployment insurance and the like. This isn’t even the Collapse of Everything, but the longest expansion of the economy in US history.

In dollar terms, it looks even funnier: The economy as measured by nominal GDP over the past four quarters grew by $830 billion. The Gross National Debt grew by $1.2 trillion.

How can this be?

For the first 11 months of Fiscal 2019 through August, the latest data available from the Treasury Department:

With tax receipts growing more slowly than the economy, and outlays soaring 7.0%, it’s hard to have a recession, when you think about it. You’re buying the continued expansion, but you’re paying a very high price for that extra stretch, because some day, that expansion will end, and then what remains is the debt.

And that debt will then really blow out because, as they always do during a recession, receipts will plunge and outlays will spiral higher.

But no problem, it’s just some trillions.

The thing is, I get to write these articles once a year, every year, and have been for years, because it’s the same fiasco every year, all over again, only now it’s a little bigger.

Fed Chair Jerome Powell keeps saying that the US is on an “unsustainable fiscal path,” which is  fine and dandy, but every time he says this, he sounds like a fossil that is completely out of touch with reality in Congress where all this got passed.  “Sustain” for these folks in Congress means sustaining their campaign funds and sustaining them through the next election.