Californians have had it with PG&E, a convicted felon infamous for sacrificing safety, maintenance, reliability, and people to enhance “shareholder value.” But is San Francisco overpaying? Take a look.

This – the offer made on Sunday – has been kicked around in San Francisco since the catastrophic wildfire in Butte County in Northern California last year that killed 85 people, the cause of which was determined to have been PG&E’s electrical transmission lines – how they’ve not been maintained, including not removing vegetation near them. PG&E is infamous for skimping on maintenance and investment to maximize “shareholder value.” PG&E filed for bankruptcy in January, and its shares have collapsed by about 84% over the past two years, a good example of the results of maximizing “shareholder value.”

On Sunday, the City announced a plan to bid for PG&E’s “assets” in San Francisco for $2.5 billion. These “assets” are poles, power lines, transformers, and other electrical equipment, some of it under ground, some of it above ground, infamously maintained in the manner of PG&E, including this power pole and transformer a few feet from our balcony: 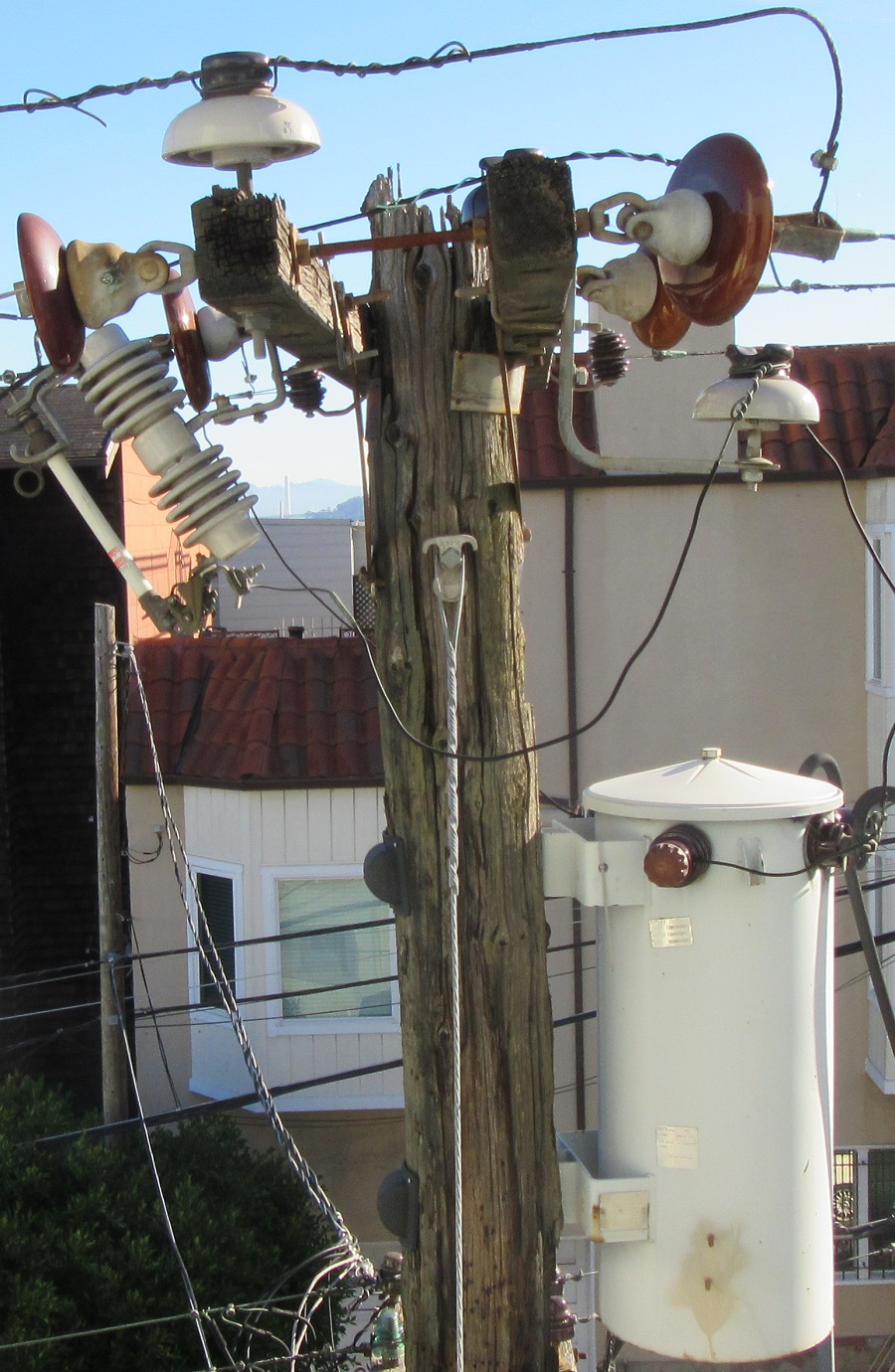 This pole is just an example. Note how the pole is completely rotten, how old the transformer is, and the insulators, and the wires. The pole was placed over 100 years ago, the transformer decades ago. I’ll show some additional stunning details in a moment. These types of power poles are all over San Francisco.

As you can tell from the pole, there is no competition in the power transmission business. This is the only set of wires to the building. It’s the same all across the country. Whoever owns the wires has a total monopoly. In the transmission business, there is no free market – so forget relying on the “market” to fix this issue. All the market wants from PG&E is dividends and a high share price, which translate into cost cuts, shitty maintenance, and inadequate investment.

The $2.5 billion purchase price would be funded by a revenue bond issue. Last November, voters approved Proposition A that authorized San Francisco’s public utilities commission to issue bonds for the purpose of acquiring PG&E’s power equipment in San Francisco. “Funding secured,” as Elon Musk would say.

PG&E is headquartered in San Francisco, but it no longer has a lot of friends here. Power outages, sometimes lasting for hours, are fairly common. I have never lived in a city where they were as common as those I have experienced in San Francisco. Some of the outages are planned and come with advance notice. Others are surprise outages because of equipment failure of some sort. I have bought extra equipment to deal with them because I can’t just shut my business down. So there is no love lost.

PG&E also provides gas in San Francisco, and this would continue.

PG&E’s 30-inch gas pipeline in San Bruno, a town near San Francisco International Airport, exploded in 2010, killing eight people and incinerating the neighborhood. A federal investigation found that the pipeline, installed in 1956, had many defective welds; but as demand grew, PG&E increased the gas pressure to force more gas through the pipeline, rather than putting a modern gas pipeline into the ground. And there were numerous other shortcomings and revelations. Shareholder value had priority.

In 2017, a federal judge convicted PG&E on six criminal charges related to the gas pipeline explosion and imposed the maximum fine of $3 million, a barely audible slap on the wrist. No one went to jail, obviously, not even the regulators that had been in bed with PG&E. But it turned PG&E into a convicted felon, for whatever that’s worth.

So, where I sit, in my WOLF STREET media mogul empire, headquartered in San Francisco, electricity service cannot get a lot worse, in terms of price and reliability, but it can get a lot better. Ultimately, the City is responsible to local voters. PG&E is responsible to its bondholders and shareholders. Those are very different priorities, from my point of view.

But is San Francisco overpaying for dilapidated outdated equipment?

Here are more photos of the utility pole out front of our global corporate headquarters. There are many of these poles around. What I want to show is just how old this thing is.

These photos show further how PG&E has handled its maintenance (“what maintenance?”) and how it has invested in its equipment. This is the same pole, seen from the bottom up. Follow the red arrows to the large wooden protector half-pipes (click to enlarge): 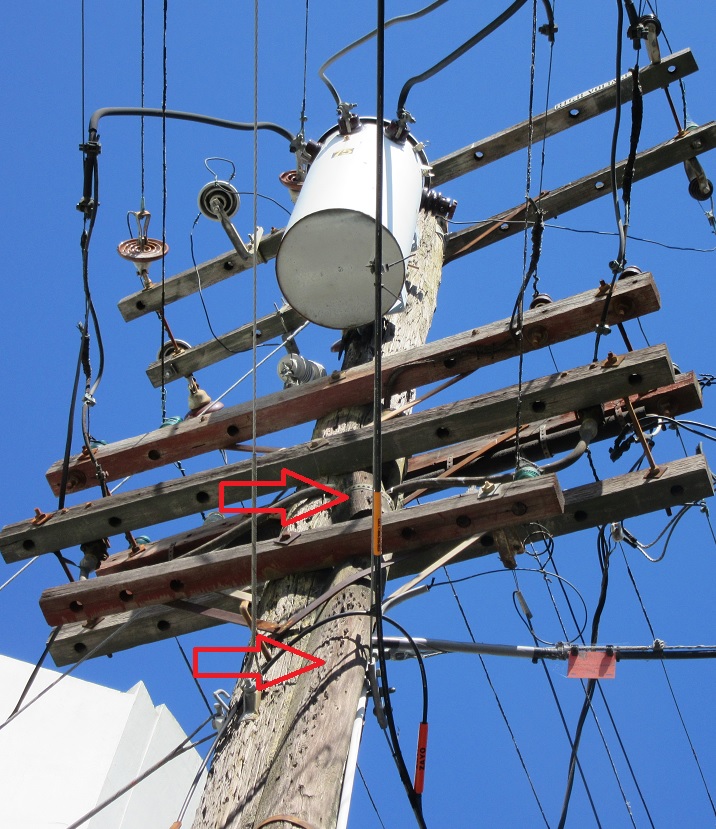 The photo below shows the same wooden half-pipes a little further down the pole: 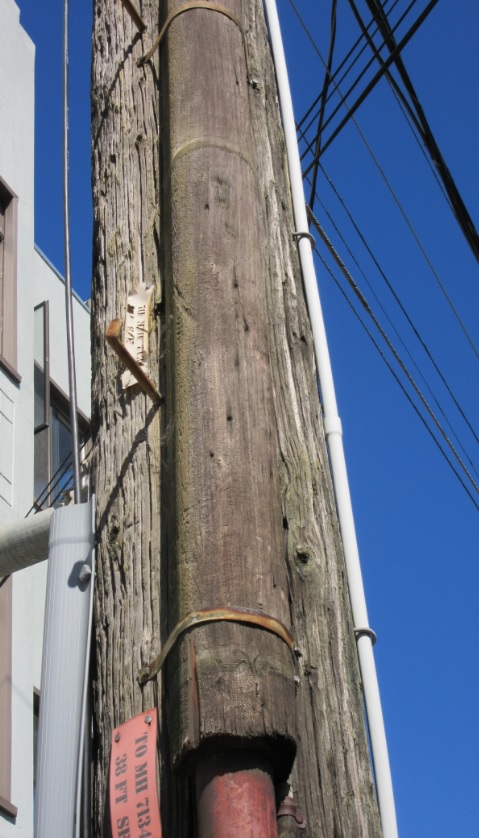 In the photo below, follow the red arrows to the small wooden half-pipe: 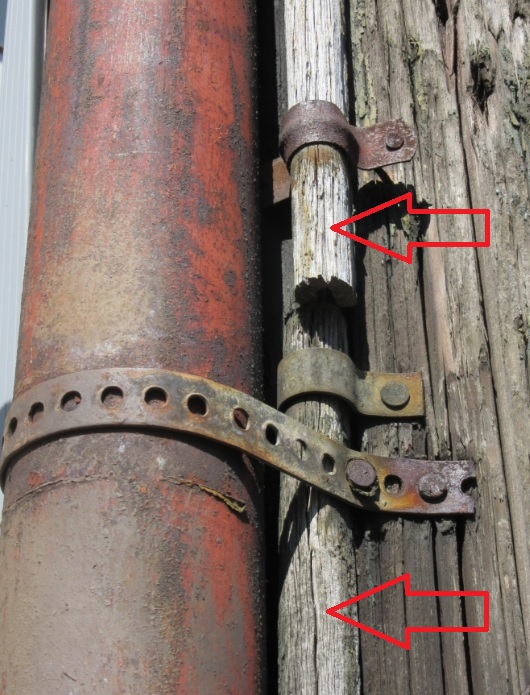 The photo blow shows the whole rickety top. Note the large wooden half-pipe along the right side of the pole: 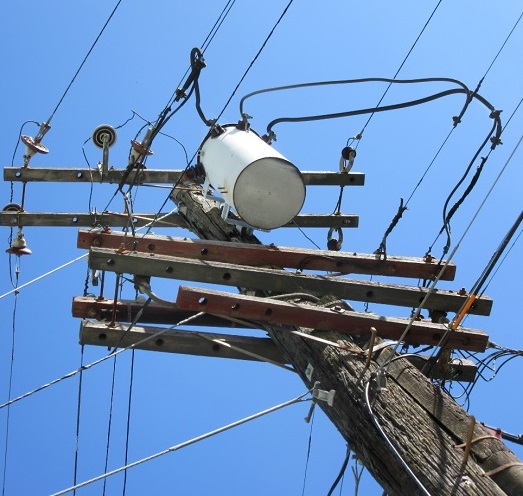 The question here: Is San Francisco paying too much for “assets” that will then turn out to be “liabilities” instead, namely accidents waiting to happen due to PG&E’s run-down equipment and negligent maintenance? Who is going to be toast when the ancient transformer blows up that is eight feet from our balcony? And how much would the City have to pay for this toast?

Separating out San Francisco’s electric infrastructure, for a population of about 880,000, is not going to be another fatal blow for PG&E, given that it serves about 16 million customers in much of California. But it would be a blow.

PG&E, has long had regulators in its pocket, as numerous investigations and scandals have shown, including the investigation into the San Bruno pipeline explosion.

California also forced ratepayers to bail out PG&E after its 2001 bankruptcy via forced above-market rates, which continue to this day, while its bond holders and stockholders were made whole at the time.

Now Californians have lost patience. And dismembering PG&E is a real option. Earlier this year, San Francisco’s public utility commission, in studying the feasibility of purchasing PG&E’s electrical equipment in San Francisco, found that a municipally owned utility could provide lower electricity rates due to lower funding costs in the bond market, and because the municipal utility would be a non-profit and would not have to make Wall Street happy. It might actually focus on its customers, who are voters.

Given the mess we’ve been in with PG&E, just about anything is better than the status quo of a monopoly whose bondholders and shareholders continue to get bailed out by rate payers, and whose rate payers in turn continue to get shafted and even killed by inadequate maintenance and investment. But that $2.5 billion looks like a lot of money for this crappy infrastructure.

148 comments for “Here Are Photos of Some of the Dilapidated Equipment San Francisco Wants to Buy from Bankrupt PG&E for $2.5 billion”