In the huge and diverse Chicago metro, prices of single-family houses, according to the Case-Shiller Index, rose 0.7% in June from May, about in line with seasonal upticks at this time of the year, which left the index up 1.5% from June last year, but still down 13% from the nutty peak during Housing Bubble 1: 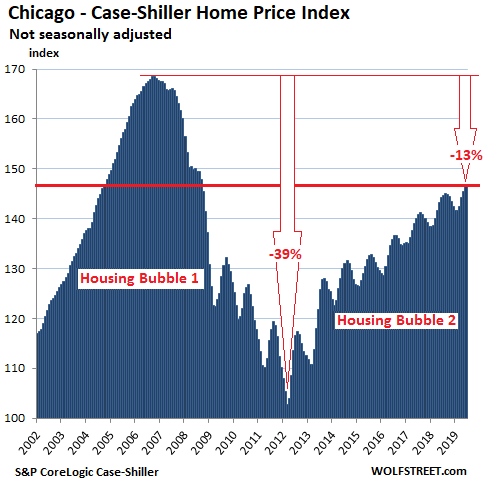 The charts here – except those for Dallas-Fort Worth, Minneapolis, and Detroit – are on the same scale, based on the Chicago chart above, with the vertical axis going from 100 to 170, which fits Chicago’s Housing Bubble 1. The Case-Shiller Index was set at 100 for January 2000. Chicago’s peak index value of 169 during Housing Bubble 1 means that house prices had risen 69% from January 2000 to September 2006. The index value for June 2019 of 146 indicates that house prices have risen 46% since January 2000.

Condo prices in the Chicago metro were flat in June, compared to May (-0.04%), whittling down the year-over-year gain to just 0.8%: 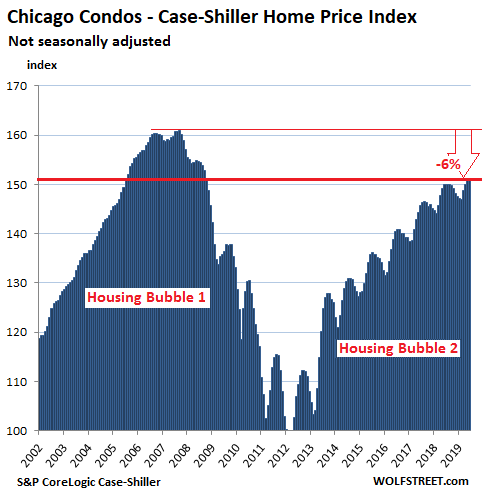 The Dallas-Fort Worth metro missed Housing Bubble 1, and so it missed Housing Bust 1. But it has been party time ever since, with a housing bubble of historic proportion: Between January 2012 and June 2019, the Case-Shiller index has skyrocketed 70%! But over the last few months, the pace of the increases has slowed. In June, the index ticked up 0.4% from May. Compared to June 2018, the index has risen 2.7%, on par with the prior two months, but the slowest pace since March 2012: 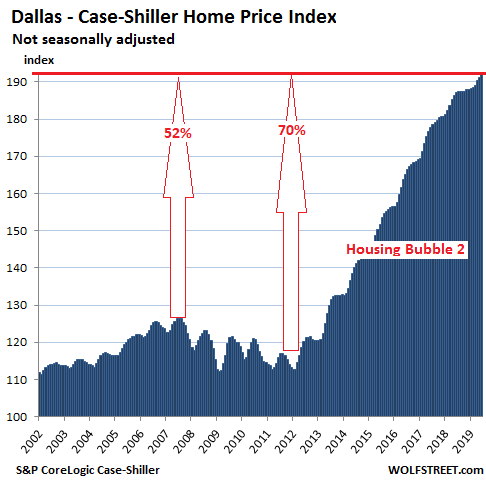 The Case-Shiller Index for the Minneapolis metro rose 1.1% in June from May, and 3.9% from June 2018. Housing Bubble 1 and Housing Bust 1 were similar in Chicago and Minneapolis, but the metros have diverged since, with house prices in Minneapolis having risen 4.7% above the peak of Housing Bubble 1 while Chicago’s prices are still 13% below the peak: 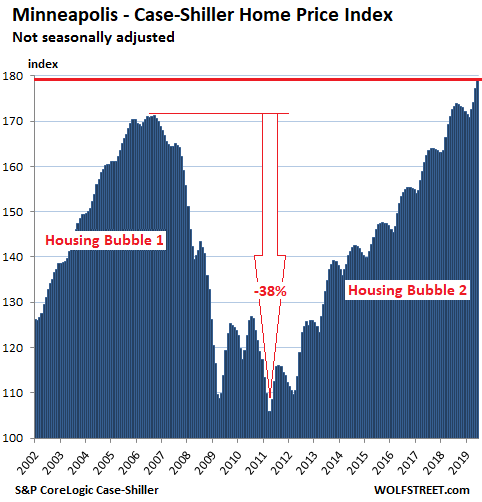 House prices in the Charlotte metro ticked up 0.6% in June from May, and rose 4.5% from June last year, to a new record, continuing a relentless push higher that started in early 2012 and hasn’t abated since: 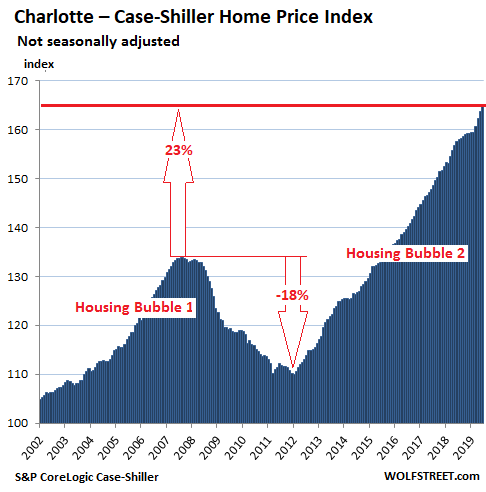 House prices in the Atlanta metro ticked up 0.5% in June from May, and rose 4.5% from June last year, to a new record. During Housing Bust 1, the Case-Shiller index had plunged 40% to an index value of 82.5 by early 2012, where it had first been in 1996. The chart is on the same scale as the charts for Chicago; note the larger amount of white space. Nevertheless, since January 2000, house prices according to the index have soared 53%: 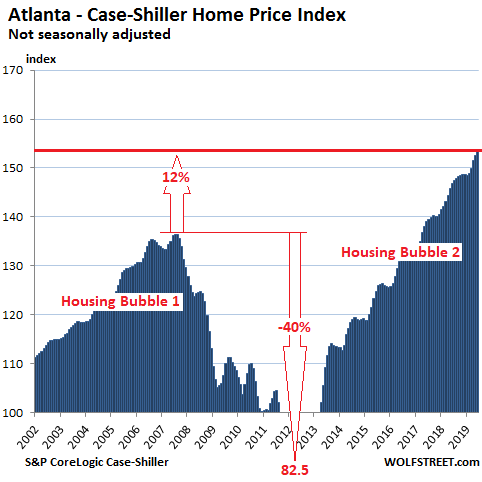 The Case-Shiller index for the Detroit metro rose 1.2% in June from May, and is up 4.2% from June last year, hitting a new all-time record for the second month in a row. From the bottom of Housing Bust 1, just before the city’s bankruptcy, house prices have doubled (+100%).

Detroit’s housing market had essentially collapsed before its bankruptcy, from levels that hadn’t been high to begin with. To show how far prices plunged, and to what extent they have skyrocketed since then, I have extended the scale. The scale of all charts above starts at 100 (the value on January 2000). The scale of the Detroit charts starts at 60. The shaded area shows the part between 60 and 100: 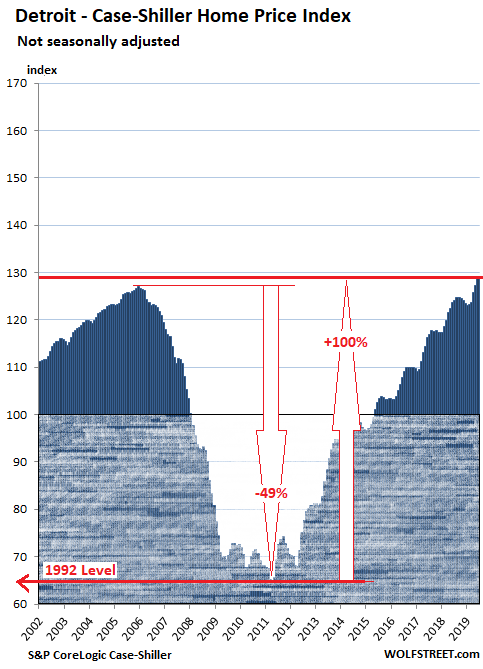 House prices in the Cleveland metro were flat in June compared to May, which reduced the year-over-year gain to 2.6%. This keeps the index for the second month in a row one notch above its record set during Housing Bubble 1 in 2006. Since January 2000, the index has risen 25%, which might be an appropriate price increase for a non-bubble market, but in our bubble-crazed times, it was the smallest increase since January 2000 among the 20 metros covered by the Case-Shiller Index: 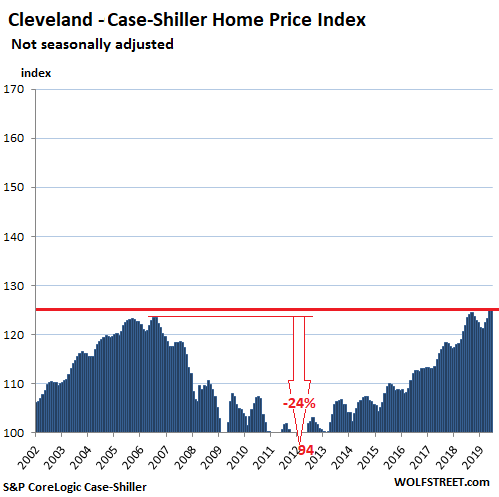 The biggest increases since January 2000 occurred in Los Angeles, where house prices have nearly tripled, followed by a gaggle of other markets, some of which have started to reverse course once again.

37 comments for “From Less-Splendid Housing Bubbles to Crushed Markets in America, August Update”