All in next-gen corporate speak to give you the warm & fuzzies. Meanwhile, Uber hits new low, down 24% from IPO price.

“The We Company,” as WeWork now calls itself, which is in the business of burning cash and selling “space-as-service,” has registered with the SEC to go public as soon as next month to get out through the IPO window while the getting is hopefully still good. And its S-1 filing, which became available today, depicts a company that takes corporate speak to a new level, has visions of $3 trillion in revenues, and, more realistically, has lost $4.3 billion over the past three-and-a-half years, including $904 million in the first half of 2019. But this chart doesn’t yet show the red-ink massacre to come in the second half: 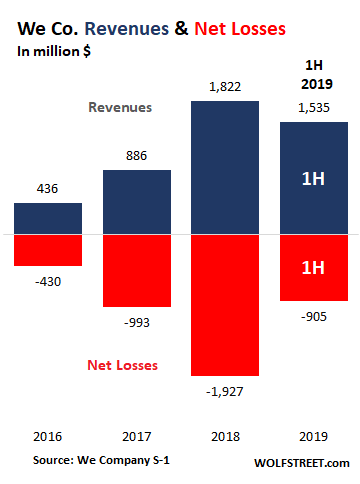 The second half, if the IPO takes place, is going to be a red-ink massacre, with two components: WeWork’s regular losses and its stock-based compensation costs.

In 2018, the full-year loss of nearly $2 billion was 2.6 times larger than the loss in the first half. So it’s likely that the full-year regular loss in 2019 will be more than double its $904 million loss in the first half. So maybe a regular loss of $2 billion. Then there are the costs of its stock-based compensation during the IPO. So let’s see.

In Uber’s case, the IPO-related stock-based compensation costs amounted to $3.9 billion, giving the company a net loss of $5.2 billion in the quarter, which exceeded revenues by $2 billion.

Both companies have a lot in common, in terms of losses and cash-burn business models. This includes gargantuan stock-based compensation costs during the IPO. This, in addition to the regular loss of $2 billion or so, will give WeWork a zinger of a loss for 2019. But it may lag behind Uber for a while longer, in terms of the magnitude of its losses.

Uber [UBER] shares fell 6.8% today to a new low of $33.96, down 24% from the IPO price. The WeWork folks see this too, and they’re now in a rush to sell shares to the public at the maximum possible price, while they still can.

Where do these billions of dollars in investor money go?

WeWork spends a lot of money on fixing up office properties, making cool little ones out of boring big ones. So some of this money goes into building out these properties, and some of the money goes to people.

Here are a few of the hilarious moments in the S-1 Filing.

Perennial losses: WeWork launched its first space nine years ago and has had ballooning losses ever since. So the distinct possibility of perennial losses gets its own place in the S-1 “Risk Factors”:

“We have a history of losses and, especially if we continue to grow at an accelerated rate, we may be unable to achieve profitability at a company level (as determined in accordance with GAAP) for the foreseeable future.”

The cash-burn is going to be “efficient.” Variations of the word “efficient” occur 64 times in the S-1 such as:

Propaganda in next-gen corporate speak. WeWork is pioneering next-generation corporate-speak, which is designed to give you the warm & fuzzies as you inhale the expressions:

OK, I can’t let the last one go. The word “disrupted” – as in “disrupted” the asset class of real estate – has been beaten and shredded in years of Silicon Valley startup-speak. So now, WeWork has turned this to mean, lose the most money the fastest in real estate, because that’s what it’s doing.

Revenue “opportunity” of $3 trillion with a T. It starts with the “addressable market size” – everyone in much of the world with a white-collar job. They’re all going to hopefully rent a desk at WeWork. In the end, its math produces $3 trillion a year in revenue opportunity. So that would be more than the GDP of France. And it walks you through the math:

In the 111 cities globally where it now has locations, and in the 169 cities where it wants to open locations in the future, there is, it says, an “estimated potential member population of approximately 255 million people.”

It then applies its “average revenue per WeWork membership for the six months ended June 30,” to those 255 million people in those 280 cities and finds that “an addressable market opportunity of $1.6 trillion.”

Citing data from CBRE Group and Cushman & Wakefield, it determined that companies spend about $11,700 per employee per year on average on “occupancy costs.” So it applies this $11,700 to its 255 million “potential members” to come up with “a total opportunity of $3.0 trillion.”

But now imagine the losses it would make on that $3 trillion in revenues. Maybe $2 trillion a year? Investors need to get ready to feed this company with some serious money to make this plan come to fruition.

Good thing that it still has a long way to go: “We have realized approximately 0.2% of our total opportunity in our 280 target cities globally, and even in our ten largest markets we have only 0.6% penetration today.”

So the trillion-dollar losses will have to wait.

And the 255 million potential members will be fed to advertisers. WeWork knows a thing or two about its members – “a sought-after demographic of consumers and businesses” – and it’s going to sell the data it has on them to its “partners” so that they can inundate the hapless members with promos and ads in their social media accounts, emails, and maybe face-to-face visits or whatever. Or rather, as it says in next-gen corporate-speak, that the “members get easy access to a diverse range of high-quality products and services tailored to their needs.” And for WeWork, this activity will be “generating incremental higher margin revenue.”

Cash-out refi hype is back full-blast. And for the first time since early 2006, people are doing it in large numbers. Read… Fuel for the Next Mortgage Bust?

145 comments for “In Hilarious IPO Filing, WeWork Dreams of $3 Trillion in Revenue But Has Billions in Losses. Red-Ink Massacre to Come in 2nd Half”