Turkish state-owned banks and subsidiaries of European banks on the hot seat.

Sales of homes of all types in Turkey plunged 31% year-on-year in May to just 82,252 units, after having already plunged 18% year-over-year in April, according to the Turkish Statistical Institute. It was the sharpest year-over-year drop in the data going back to 2013, as Turkey’s economic crisis continues to bite. For the first five months of 2019, home sales dropped 19% compared to the same period last year, to 423,088 units.

The six-month moving average, which reduces the large seasonal and month-to-month swings of home sales in Turkey, dropped to the lowest levels since 2013-2014: 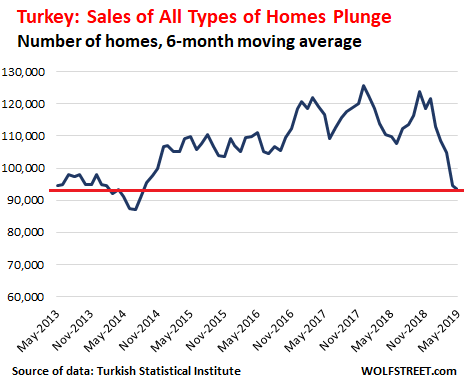 In terms of new homes, sales crashed 39% in May compared to the same month last year, to 33,765 units, after dropping almost 30% in April.

Turkey’s housing market is in a deep downturn after a debt and currency crisis last year sent interest rates on mortgages soaring and decimated consumer spending power. The government has lowered taxes on home purchases and offered cheap lending via state-run banks to help boost activity in the industry and stem the rising number of new homes lying empty.

Indeed, demand for mortgages is falling so fast that Turkey’s two biggest public owned banks, Vakifbank and Ziraat Bank, this week started offering mortgages to home buyers at below market rates in an attempt to reverse the trend. Both banks have cozy ties with Turkey’s President Recep Tayyip Erdoğan.

Vakıfbank’s new chairman, appointed last month, is Turkey’s former interior minister and Erdoğan ally, Abdülkadir Aksu, while Ziraat Bank is managed under the auspices of Turkey’s sovereign wealth fund, which is chaired by Erdoğan himself. The lender has been instrumental in spearheading the government’s efforts to revive the economy in recent months, by giving cash-strapped, debt laden consumers and businesses the chance to reschedule the debt they owe to many of Turkey’s private banks at low state-subsidized rates of interest.

This surge in loan growth helped the economy expand by 1.3% quarter-on-quarter in the first three months of this year, just in time for municipal elections, following three consecutive quarters of negative growth. But it could come at a heavy price: the more these state-owned lenders are called upon to support the economy by flooding it with more fresh debt, the more credit risk they themselves take on board.

Just this week, as political tensions between the U.S. and Turkey intensified, Moody’s downgraded the two state-owned lenders by two notches, compared with one notch for the other 16 Turkish banks it covers.

“The larger downgrade reflects the unseasoned risk that the banks have built via recent higher-than-average loan growth,” the ratings agency said. Moody’s also warned of a significant increase in external vulnerability for the country and a higher risk of more extreme government policy measures, including restricted access for depositors to foreign currency.

Erdogan has so far shown scant interest in implementing the sort of measures international investors, banks and ratings agencies have been calling for, such as requesting an emergency bailout from the IMF, much as Argentina did last year, admittedly to little avail, or dialing back his growing interference in monetary and economic policy decisions.

Erdogan wielded that influence to deliver over a decade of uninterrupted economic growth through unrestrained borrowing. But that all came to an end last year when a currency crisis sent shock-waves through Turkey’s economy, lifting the country’s debt levels and current account deficit to dangerous levels. Late last month, the IMF called on Turkey to ensure economic and financial stability, saying the government should introduce a comprehensive package of reforms.

The dilemma for Erdogan is that much of what is left of his waning popularity derives from the early success of his debt-fueled economic miracle, which is now fast turning into a nightmare, not to mention his vocal opposition to the IMF, to whom Turkey finished repaying $23.5 billion of debt in 2013. And there’s still little sign that Erdogan is willing to reverse course and deal with the very same financial institution he has spent the last 16 years denouncing.

“They want to see a Turkey like before, a Turkey that went cap-in-hand to the IMF,” Erdoğan recently said.

In the meantime, the deleveraging continues, which is bad news not only for Turkey’s state-owned banks, which are having to pick up much of the slack in the credit markets, but also the five major European lenders that have carved out a sizable, and for many years highly profitable, presence in Turkey — — BBVA, Unicredit, BNP-Paribas, HSBC and ING — and are now struggling with rising default rates in their Turkish entities.

Unicredit had to splash out roughly €1.5 billion last year to support its part-owned Turkish subsidiary Yapi Kredi, of which it owns a 40% stake. Spain’s BBVA, which owns just under half of Turkey’s largest listed lender, Garanti Bank, has warned that conditions are likely to further deteriorate in 2019 on the back of stalling credit creation and rising defaults.

This week, the Bank of Spain, worried about the exposure of Spanish banks, echoed the concerns raised by the ECB, which had warned last year about the risks of Turkey’s unraveling economy for European banks. The Bank of Spain now warned for the second time this month of the contagion risks posed not just by BBVA’s outsized exposure to Turkey but also to Argentina, whose economy continues to sink despite the $56 billion bailout it received from the IMF last year. By Don Quijones.