Freight shipments across all modes of transportation dropped the most since Nov 2009.

Freight shipment volume in the US dropped 6.0% in May compared to May last year, the sixth month in a row of year-over-year declines, and the sharpest year-over-year drop since November 2009, according to the Cass Freight Index for Shipments.

The index tracks shipments of goods for consumer and industrial sectors across all modes of transportation – truck, rail, air, and barge. But it doesn’t track shipments of bulk commodities, such as grains. This chart shows the changes in percent of shipment volume for each month compared to the same month a year earlier:

Similarly, the Association of American Railroads (AAR) reported that in May overall freight rail volume fell 4.1% from a year ago. The segment of intermodal freight volume – such as containers hauled by truck and then transferred to rail, or semi-truck trailers that piggyback on special rail cars – dropped 5.9%.

This adds industry-wide data to the cacophony emanating from earnings reports by trucking companies and railroads – including J.B. Hunt, YRC Worldwide, and BNSF Railway: Shipment volumes are declining, but companies are trying to maintain their revenues by hiking freight rates, and now freight rates that had skyrocketed last year have also come under pressure.

But the comparisons are with the phenomenal outlier-boom-year that was 2018 for the transportation sector, and particularly with May 2018, which had been the peak of that shipments boom. Just how big was last year’s boom in shipments?

In the stacked chart below of the Cass Freight Index for shipments, the top black line delineates the shipping boom in 2018 that then faded in the second half and turned negative year-over-year in December 2018 (black line drops below green line).  The index for 2019 (red line), while below 2018, remains solidly above 2017 and all prior years: 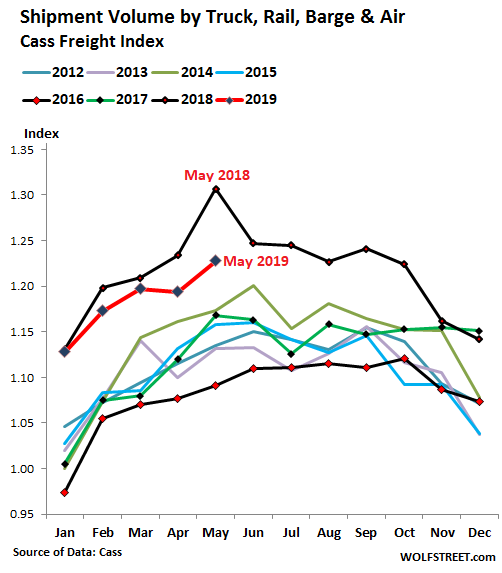 In late 2017 and through summer of 2018, freight rates had been driven up by a capacity crunch in the trucking industry, and a panic amid shippers – such as big retailers or industrial companies that need to get their merchandise across the country – that trucking companies won’t be able to keep up with demand.

To meet that demand, truckers went on a buying binge, ordering a record number of Class-8 trucks that now have entered service. And suddenly, the market is oversupplied with capacity, orders for Class-8 trucks collapsed by 71% in May compared to May last year, and freight rates are falling.

But there is a glaring duality in the market. DAT Solutions, the largest truckload freight marketplace in the US, reported that average contract rates for dry vans have fallen 6.7% in May from their peak last July, and 2.6% year-over-year, to $2.23 a mile. Contract rates mostly apply to larger trucking companies with large clients with which they have long-term contracts.

In a big blow to smaller truckers that rely on the spot market for loads: Average spot rates, according to DAT, have plunged 17% year-over-year and 23% from the peak in June to $1.79 a mile. These spot rates put smaller trucking companies into a squeeze. As Craig Fuller, CEO at FreightWaves, wrote in an editorial about the duality currently in the market: “Many fleets are just fighting for survival.”

The Cass Freight Index for Expenditures is starting to show this trend. The index tracks spending by shippers, such as retailers or industrial companies, on all modes of transportation – truck, rail, air, and barge – and includes fuel surcharges. It reflects the total amount spent by shippers on freight. The underlying data is based on $28 billion in freight transactions that Cass processes annually for its clients – major shippers in consumer packaged goods, food, automotive, chemical, OEM, retail, and heavy equipment. 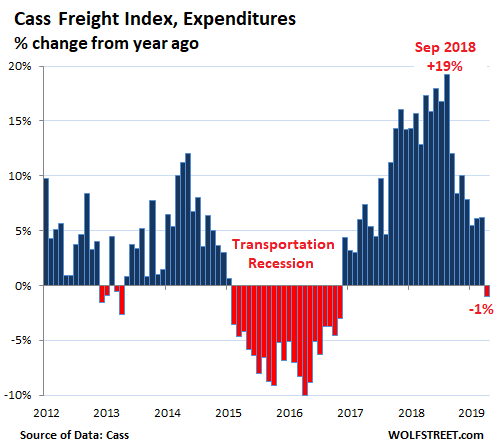 Drilling down into some of the details: The Cass Intermodal Price Index, which tracks pricing of domestic intermodal freight (via truck and rail), had reached a year-over-year gain of 12% last July. Prices continued to rise but at slower rates, peaking in March. In April and May they fell on a monthly basis, with the index retracing to where it first had been in October 2018.

“With the severity of weakness in truckload spot pricing, [the price boom] has finally come to an end,” Cass reports for May. With those two monthly declines in a row, the index in May was still up 4.2% from May last year: 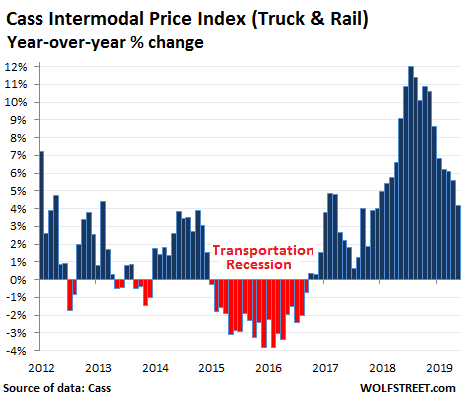 Full-truckload pricing has now declined in all but one months this year, according to the Cass Truckload Linehaul Index, which tracks per-mile full-truckload pricing and does not include fuel or fuel surcharges. The index is down 6% from its peak in December, wiping out most of the large gains last year, and whittling down the year-over-year gain in May to just 1.2%.

Cass points out: “While still notable given the increasingly difficult comparisons [with the boom in the first half of 2018], it also suggests that the weakness in spot pricing is having a material effect”: 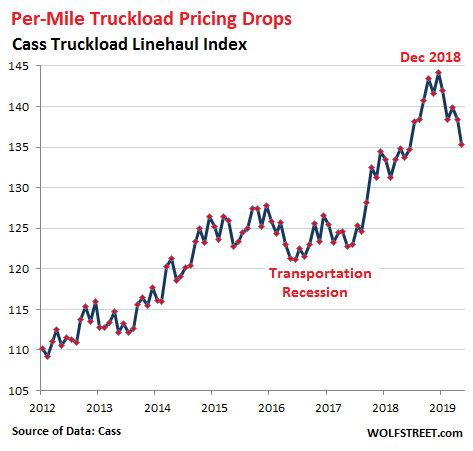 This is how the blistering boom in the transportation sector last year through the summer is now unwinding. The industry is very cyclical. But the declines in shipment volume in 2019 so far are from that blistering boom that resulted from companies piling on record inventories to front-run potential tariffs. This strategy appears to have run its course, and a different sense of reality is settling on the industry.

Orders for Class-8 trucks plunged by 71% in May year-over-year, the weakest month of May since 2009.” Read…  What Collapsing Orders for Heavy Trucks – Down 71% from a Year Ago – Say about the U-Turn in Trucking