The Fed & China dumped. But there was huge demand elsewhere. Here’s who bought.

The US debt-ceiling charade is back. It’s where different political power groups in Congress stall legislation that would raise the maximum amount of money the government is allowed to borrow to fund what Congress had ordered the government to fund. It’s a game of chicken that can push the US government into default, to the bewilderment of the foreign creditors of the US that are holding a big part of this debt that would default.

The debt ceiling went into effect on March 1. Since then, the government has not been allowed to increase its debt, which had just exceeded $22 trillion. But the government, as told by Congress, will continue to deficit-spend, and fund this deficit-spending by robbing Peter to pay Paul. This works for a few months, until Peter has nothing left to rob. That’s the out-of-money day, on which the government will not be able to redeem Treasury securities that come due, followed by stunning financial fireworks across the globe. On the other hand, when the debt ceiling is lifted, default is averted, and the gross national debt jumps by $800 billion or so in a couple of weeks: 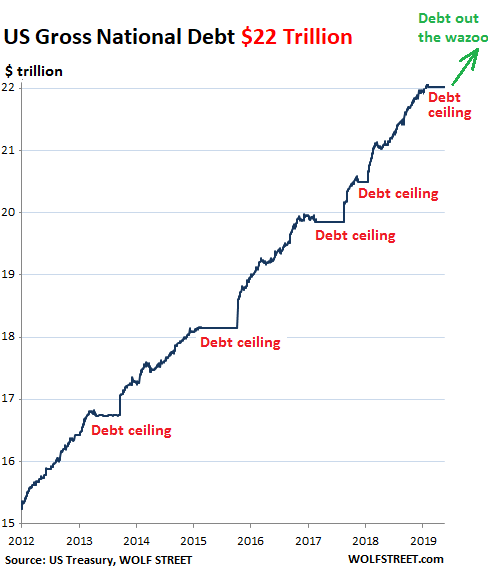 The Treasury Department disclosed this afternoon (TIC data) how much of this debt that gets so iffy during every debt-ceiling fight was held by foreign investors through April, and how much they bought or dumped.

This is a question that is getting increasingly nerve-wracking as this debt is ballooning even in good economic times, while practically no one in Congress or the White House even pays lip-service to fretting about it anymore.

Everyone knows, including the foreign holders, that this debt will balloon into the stratosphere when the economic cycle turns. So here we go.

All foreign investors combined – “foreign official” holders, such as foreign central banks and government entities, and foreign private-sector investors – raised their holdings of Treasury securities over the 12-month period through April by $253 billion, to $6.43 trillion. 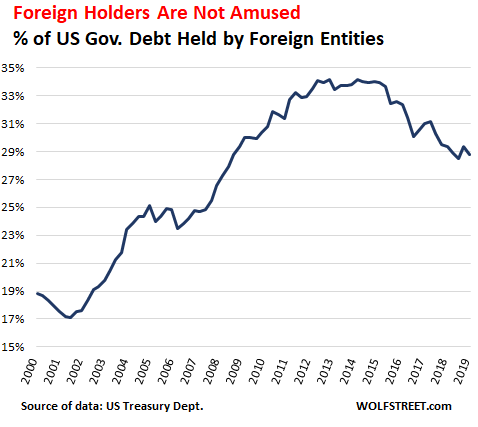 China, the largest foreign creditor of the US, dumped $69 billion of its Treasury securities over the 12-month period, including $17 billion just in March and April. At the end of April, China’s holdings were down to $1.11 trillion (the peak: $1.25 trillion in February 2016).

Japan, the second largest foreign creditor of the US, added $32 billion in Treasury securities to its holdings over the 12 months, even after shedding $14 billion in April, to $1.06 trillion (the peak: $1.24 trillion at the end of 2014): 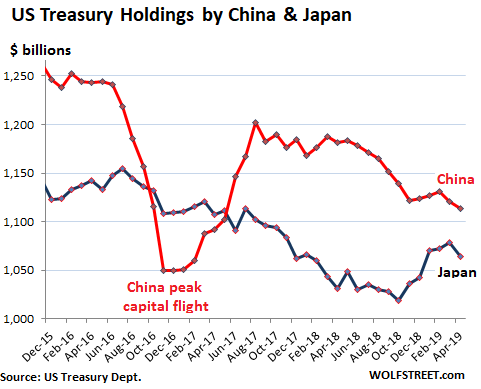 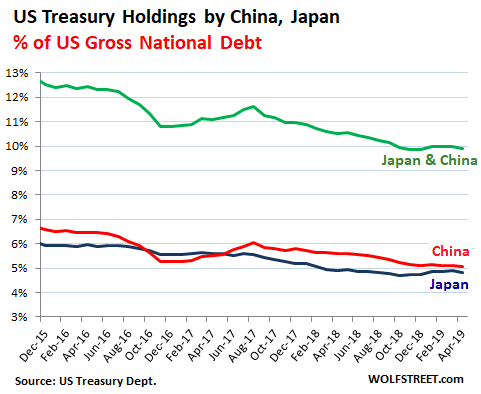 Far behind China and Japan is a gaggle of other foreign holders, most of them tax havens for foreign corporate or individual entities. Belgium is home to Euroclear, which handles vast sums in fiduciary accounts (in parenthesis, Treasury holdings in April 2018):

Other than foreign investors, who else bought this huge pile of new US debt?

The US gross national debt soared by $960 billion over the 12-month period through April. Over the same period, all foreign investors combined increased their holdings by $253 billion, as seen above. This leaves $707 billion that someone else must have bought. Who?

Nope, not the Fed. It shed $271 billion in Treasury securities over the 12 months as part of its QE unwind, bringing its holdings down to $2.12 trillion by the end of April.

US government entities piled on $102 billion in Treasury securities over the 12 months, bringing their total to $5.83 trillion. This “debt held internally” is held by government pension and disability funds, the Social Security Trust Fund, etc., that have invested their beneficiaries’ money in Treasury securities, rather than stocks or other instruments. This “debt held internally” is owed the beneficiaries of those funds and is a real debt of the US government.

To summarize: Over the 12 months, foreign investors added $253 billion; the Fed got rid of $271 billion; and US government funds acquired $102 billion. All three combined, accounted for a net increase of Treasury holdings of $84 billion.

But the total gross national debt soared by $960 billion over the same period. Someone must have bought the remaining $876 billion. But who? The only one left…

American institutions and individuals added $876 billion of Treasuries to their holdings, bringing them to $7.64 trillion. US banks held nearly $500 billion of them, according to the FDIC. Other US institutional holders include pension funds, mutual funds, hedge funds, corporations such as Apple, and others. Individuals also hold a portion of these Treasury securities, either indirectly via bond funds or pension funds, or directly via their brokers or at Treasury. All combined, American institutions and individuals held 34.7% of the US gross national debt: 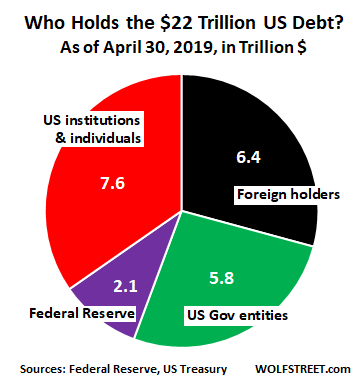 Ironically, there is no shortage of demand for this debt – despite the charade of the debt-ceiling-default threat hanging over it. On the contrary. Investors, mostly US institutional and individual investors but also some foreign investors, have gone nuts over it, bidding up prices and thereby pushing down yields, with the 10-year yield today settling at 2.09%.

74 comments for “Who Bought the Nearly $1 Trillion of New US Government Debt over the Past 12 Months?”