American homeowners have learned a lesson, despite what banks and the Fed want them to do.

When you google “HELOC” the first batch of entries that come up are ads trying to get you to take out a HELOC. The most aggressive advertisers that outbid all others in my sample of one were: Lending Tree, the “home equity” division of J.P. Morgan Chase, and Quicken Loans. Then it’s lender after lender offering enticing terms. It’s not like HELOCs – home equity lines of credit – are playing hard to get or anything. But demand has collapsed.

At the end of February, outstanding HELOC balances at all commercial banks in the US fell to $346 billion, according to the Federal Reserve Board of Governors. They’re down 43% from the peak in April 2009 – and now back where they’d been in July 2004 on the way up. This marks a decline that has now lasted 10 years: 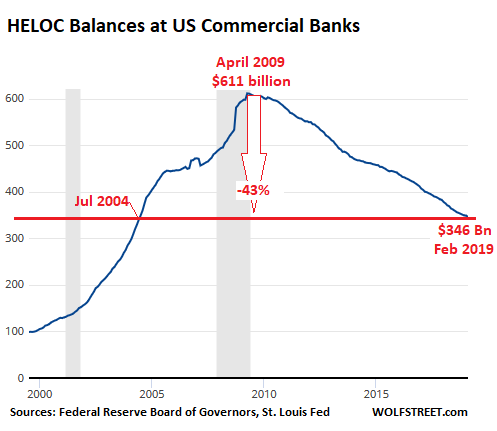 These balances are not adjusted for inflation – neither for consumer price inflation nor for rampant home price inflation, which makes this trend that much more astounding. That was a bubble that burst in 2009. And the Fed was never able to reflate it – despite record low interest rates, and in many markets record home prices.

From 2002 till the peak in April 2009, HELOC balances had soared by nearly 300%. It was a bubble whose time had come. Homeowners were using their homes, whose prices were soaring, as ATMs. This money was plowed back into the economy in form of consumption, or was used as down-payment for rental properties, or was invested in the latest story stock.

The housing-and-mortgage crisis annihilated those dreams of the endless ATM. And it seems, Americans learned a lesson – a lesson that neither lenders nor the Fed appreciate. The lenders make money off HELOCs, and so they push them. And the Fed wants consumers to borrow against their homes and spend this money, according to William Dudley, when he, at the time still president of the New York Fed, was lamenting this “evolving consumer behavior.”

The chart below shows the furious HELOC bubble and the subsequent decade-long decline in terms of year-over-year percentage changes in the balances. It is interesting how in 2006, growth halted, and then came a final spurt in 2008 and 2009, perhaps as homeowners who’d lost their jobs were using their HELOCs to fund their mortgage payments and expenses, until the banks put a stop to it: 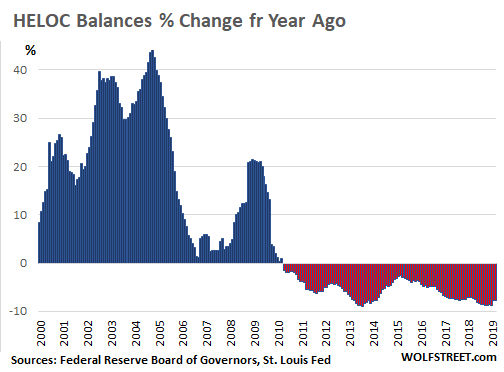 HELOCs carry lower interest rates than unsecured credit, such as credit cards, payday loans, or personal lines of credit. They’re a legitimate, and in some cases a smart way to borrow. But there’s a big risk: the homeowner puts the house on the line.

How Americans have abused HELOCs as ATMs before the mortgage crisis, and how demand for HELOCs has since then collapsed — despite all efforts by the Fed to stimulate this sort of borrowing that leads to consumption — is one of the more interesting long-term shifts in consumer behavior to come out of the crisis.

The San Francisco Bay Area and Seattle lead with biggest multi-month drops in home prices since 2012; San Diego, Denver, Portland, Los Angeles also show declines according to the Case-Shiller Index. Others have stalled. A few eked out records. Read…  The Most Splendid Housing Bubbles in America Get Pricked

100 comments for “Demand for HELOCs Collapses to 15-Year Low”