GM’s Mexico vehicles now are 23% of its US sales. And the Japanese have massively discovered Mexico’s cheap labor.

The total number of new vehicles exported from Mexico to the US in January rose 9.1% from a year ago to 191,072 vehicles, according to figures compiled by the vehicle manufacturers association AIMA and released by Mexico’s National Institute of Statistics and Geography (INEGI). In the year 2018, total new vehicle exports from Mexico to the US leaped by 9.9% to 2.57 million vehicles, after having already jumped by 9.4% in 2017. 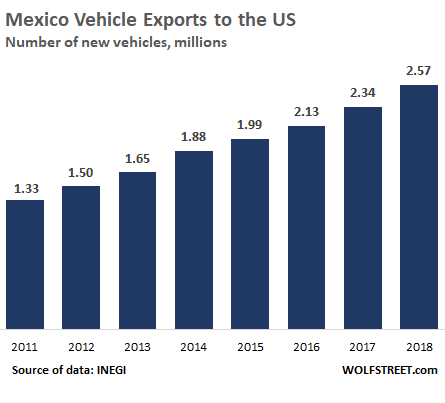 Since 2011, vehicle exports to the US have surged by 93%. During that period the number of vehicles exported to the U.S. from Mexico has gone up every single year, sometimes by double-figure percentages, including 13.9% in 2014. 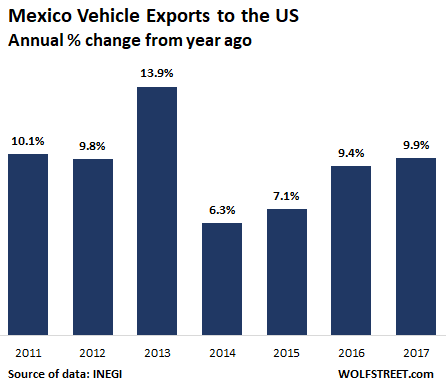 There are two mains reasons why Mexican vehicle exports to the U.S. have almost doubled in the last eight years, from 1.36 million units a year to 2.57 million:

More global car manufacturers have set up shop in Mexico. In 2005, when INEGI began publishing stats on Mexico’s vehicle exports, there were just six large vehicle manufacturers (Chrysler, Ford, General Motors, Honda, Nissan and Volkswagen) producing and exporting cars from Mexico. By 2011 that number had risen to eight, after Fiat and Toyota had joined the fold. Today, the total number is 11, following the recent arrival of Audi, Kia and Mazda.

Some of the biggest manufacturers have significantly expanded their operations in Mexico, where salaries for autoworkers are just a fraction of what they are in the U.S. In 2011 General Motors exported 318,149 vehicles from Mexico to the U.S. By 2018, that had surged by 110% to 666,765, accounting for 23% of GM’s total US sales in 2018.

Fiat-Chrysler has also massively expanded its Mexico operations over the last eight years, increasing its total annual exports to the US by over 200%, to 504,793 units in 2018. Other big movers include Honda and Toyota. Audi, Kia, and Mazda now assemble cars in Mexico but didn’t do so in 2011. Note that Ford is the only automaker whose exports from Mexico to the US actually dropped (-37%) since 2011. Most of what Ford builds in Mexico are cars, and Ford’s car sales in the US have plunged: 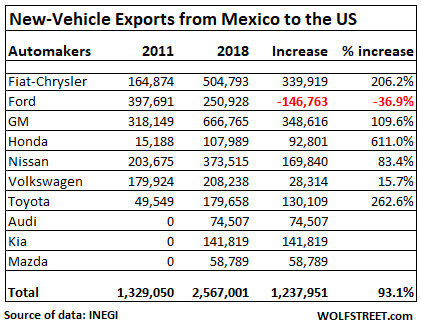 Here are some additional observations:

The current global slowdown in auto demand is likely to have an effect given that roughly one out of every five cars Mexico exports are shipped to countries other than the US, including Canada, Europe, China and other parts of Latin America.

The recent reduction in production could also be due to local disruptions: In January — the worst month for vehicle exports — a number of key car-producing States in Central Mexico, such as Puebla and Queretero, suffered the brunt of of the disruption caused by gasoline and diesel shortages resulting from the Mexican government’s war against rampant oil theft. There was also disruption caused by striking maquiladora workers, including in car parts plants, over low pay in the northern state of Tamaulipas and the central Pacific state of Michoacan. Whether these two factors were enough to hamper the flow of finished cars to the U.S. is as yet unclear. By Don Quijones.

These workers are a lifeline for Mexico. Read…  Mexico’s Cash Cow: Remittances from the US & Other Countries Surge to New Record

24 comments for “Just How Huge Are Mexico’s Auto Exports to the US? How Fast Have they Grown?”