These workers are a lifeline for Mexico’s economy.

The total amount Mexico received in “remittances” — transfers of money by workers of Mexican descent mostly in the US but also other countries to individuals in Mexico — surged by 10.5% in 2018 to $33.4 billion, the highest figure registered since records began, back in 1995, and beating the prior records set in 2016 and 2017, according to the Bank of Mexico. 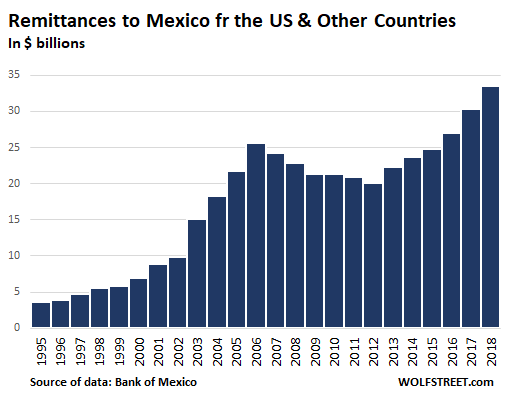 The cash remittances are a lifeline for Mexico’s economy, accounting for 2.7% of Mexico’s GDP, up from 1.9% in 2009. Most of them get spent very quickly in the Mexican economy. In some Mexican states, they can represent as much as 10% of total revenues. In 2018, they provided more funds than the $29.3 billion in export revenues that state-owned oil company, Pemex, obtained from its exports of crude oil and other hydrocarbon products, and they provided more funds than foreign direct investment in Mexico ($30.7 billion).

The last year saw a surge in both the number of transactions made as well as the average amount sent in each transaction, according to the Bank of Mexico. Here are some standouts for 2018:

A number of factors have been put forward to explain the recent surge in cash transfers from Mexicans living abroad, including the improving US labor market, particularly in the construction sector, and a weakish peso.

The longest period of growth in the flow of Mexican remittances on record was between the mid-1990s through 2006, at which point the Financial Crisis in the US, the housing bust, and the housing construction bust, and the massive job losses that came with it, slowed down the money flows.

Every single year between 1995, the year the Bank of Mexico began tracking the movement of funds between Mexican workers in the U.S. and their families back in Mexico, and 2006, a fresh annual record was registered. Between 2000 and 2001 the total amount sent grew by around 35%, from $6.57 billion to $8.89 billion. In 2003 the rate of growth surpassed 50%.

The only thing capable of slowing this inexorable tide of remittances was the Financial Crisis. After the record year 2006, the amount of money sent from the U.S. to Mexico decreased every single year until 2012, by which time the southward flow of money was over $5 billion lower than it had been six years earlier. The recovery began in 2013. Since then, the amount sent each year has increased by 65%, from $20 billion to $33.4 billion.

BBVA Bancomer predicts that Mexican’s remittances will continue to grow in 2019, albeit at a slightly slower pace — 6% instead of 10% — to about $35 billion, almost exactly 10 times the amount they brought in in 1995, the year records began. By Don Quijones.

In Europe, the banking lobby and the ECB will have a cow. Read…  Italy Guns For Glass-Steagall-Type Law to Break Up Banks, Cut Bailout Costs for Taxpayers

36 comments for “Mexico’s Cash Cow: Remittances from the US & Other Countries Surge to New Record”