Nasdaq down 24% already. Renaissance IPO ETF down 31%. But Uber and other unicorns are planning record IPOs in 2019, à la dotcom-crash-debut in 2000.

The IPO hype machine has produced some very successful companies and a lot of spectacular wealth transfers from the hapless public to early investors selling their shares. Here are two of the standouts that I covered:

Snap [SNAP], purveyor of the Snapchat app and must-have sunglasses with a built-in camera: Shares peaked at $29 on the second day after its IPO, given it a market capitalization of $32 billion. Shares closed on Friday at $4.96 and this morning trade at $5.24, down 82% from day two of trading.

Blue Apron [APRN], the cream of the crop of about 150 VC-funded meal-kit startups founded over the past five years, was valued at $2 billion during its last round of funding in June 2015 when it was one of the most hyped unicorns that would change the world. Then enthusiasm began to sag. By the time the IPO approached, the IPO price was cut from a range of $15-$17 a share to $10 a share. Shares closed on Friday at $0.68 and are trading this morning at $0.71, down 93% from its IPO price.

But not all IPOs are “tech” companies – though there’s nothing “tech” about a meal-kit maker other than the least important part, the app. The Renaissance IPO ETF [IPO] holds the shares of companies across the board that went public over the past two years. After two years, the companies are removed from the ETF. Its top five holdings are in real estate, insurance products, music streaming, and cable TV, so not exactly pushing the boundaries of tech invention.

These five IPOs haven’t done all that badly, compared to the wholesale destruction of Blue Apron, though they all have dropped sharply from their recent peaks (prices as of this morning):

Overall, the Renaissance IPO ETF has plunged 31% from its peak in June 2018 (data via Investing.com): 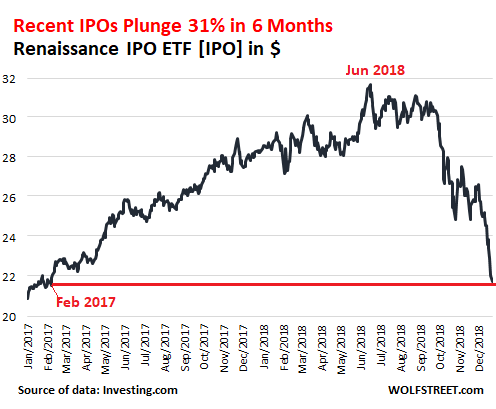 The Nasdaq itself has dropped 24% from its all-time peak at the end of August.

It is in this new reality that some of the biggest startups and some of the biggest money-losers in the startup circus are trying to unload the shares to the public in 2019 before the “window” closes. The enormous hype about these IPOs has already started, with bankers funneling this hype to the Wall Street Journal, which breathlessly reported on the big numbers to be transferred from the public to the selling insiders and the companies. The hyped numbers are truly huge.

The biggest candidates that are that are now being hyped for an IPO in 2019 are:

Uber, with a current “valuation” of $76-billion, could go for an IPO in early 2019 that would value it at “as much as $120 billion,” the WSJ reported, based on the hype the bankers are now spreading to maximize their bonuses. Not all shares would be sold in the IPO, so the proceeds in this scenario could reach “as much as $25 billion.”

Then there is a gaggle of other big startups that could also head for the IPO window in 2019, according to the WSJ’s “people familiar with the matter,” but apparently haven’t decided on the timing yet. They include:

The all-time high that “tech” IPOs combined raised in a single year was $44.5 billion. If these tech IPOs come to pass in 2019, and if these valuations can be pulled off, with Uber alone hoping to raise $25 billion, the 2000-record would be broken by a large amount.

That would make sense: The year 2000 was when the dotcom bubble began to collapse catastrophically, and everyone tried to get their heroes out the IPO window before it would close for years to come. The Nasdaq, where these IPOs were concentrated, would eventually crash 78% from its peak in March 2000, with catastrophic consequences for those who’d bought the hype.

The WSJ muses about this new generation of record-setting IPOs and Wall Street bankers’ hype machine:

For average investors, it could mean they finally will be able to bet on companies like Uber that have become part of their everyday lives but have been out of reach, even as their estimated values ballooned.

When all IPOs are included, and not just “tech” IPOs, 2018 was a banner year, with $54 billion raised. This includes 47 tech companies that raised only about $18 billion – a far cry from the $44.5 billion that tech IPOs raised in 2000. But 2019 is going to fix this shortcoming, assuming that the hype works and that the public is buying.

The WSJ, citing Dealogic, pointed out that tech IPOs this year on average soared 28% on the first day of trading. No word about what happened afterwards. But the Renaissance IPO ETF is down 31% so far this year. Reality starts after the first few days of trading.

Then, the WSJ tucked this reality-infested warning into its last paragraph:

In another sign of exuberance, investors are overlooking lofty valuations and measly — or zero — profits to have a shot at outsized returns. In the first three quarters of the year, four-fifths of all U.S.-listed IPOs were of companies that lost money in the 12 prior months…. That is the highest proportion on record.

So the last three months of 2018 plus 2019 and perhaps years to come are shaping up to be, by the looks of it, a similarly glorious period for tech stocks, IPOs, and the Nasdaq as the period from March 2000 till late 2002.