Debt out the wazoo, but someone is still buying it.

The US gross national debt has ballooned by $1.33 trillion over the past 12 months to $21.8 trillion as of December 14, according to Treasury Department data. Over the past six months alone, this debt has ballooned by $740 billion, despite a strong economy: Fueled by a stupendous spending binge and big-fat tax cuts, the government has been increasing its debt at a rate of $123 billion a month on average over the past six months. 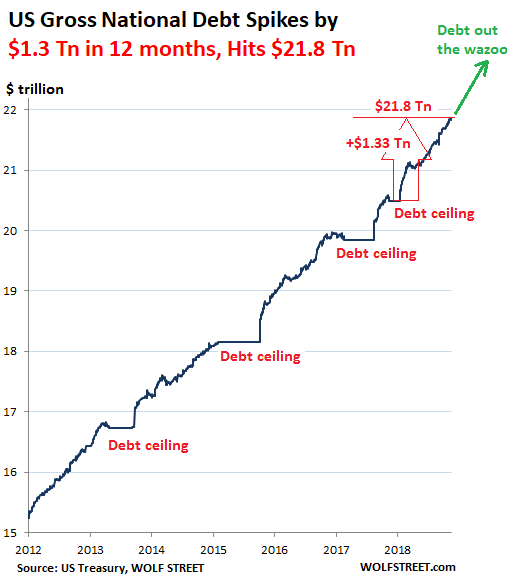 But who’s buying all this debt?

US government debt is an income-producing asset for investors — the creditors of the US. And when the pile of US debt increases, by definition, someone has to buy it. But who? China, Japan, and other foreign investors? Nope. They’re shedding this debt. So here we go.

Foreign investors in total reduced their holdings of marketable Treasury securities in October by $25.6 billion from September, to $6.2 trillion, having shed $125 billion since the end of October 2017, according to the Treasury Department’s TIC data released Monday afternoon.

Foreign holders of marketable Treasury securities fall into two categories: “Foreign official” holders, such as central banks and government entities; they cut their holdings by $132 billion over the 12 months, to $3.95 trillion. And private-sector investors; they added about $7 billion to their holdings, totaling $2.25 trillion at the end of October.

By country, the two biggest holders are China and Japan, but both have been shedding Treasury securities: 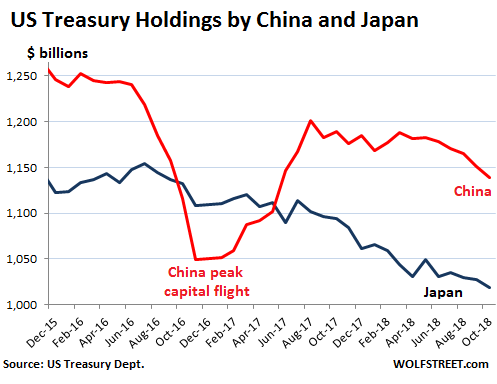 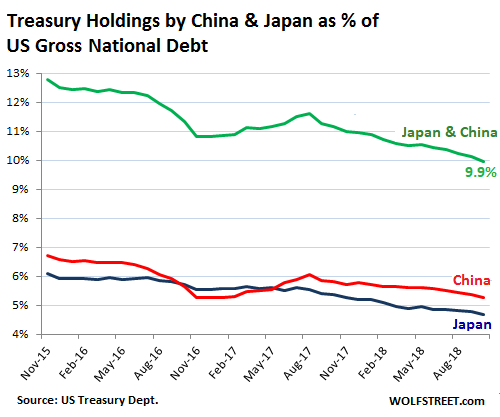 Other Big Foreign Creditors of the US government

Of the 12 largest holders of US Treasuries, after China and Japan, seven are tax havens for foreign corporate and/or individual entities (bold) and one (Belgium) is the location of Euroclear, a massive outfit that provides, as it says, Financial Market Infrastructure services, holds about $32 trillion in assets in fiduciary accounts, and settles about $830 trillion in trades per year for its clients. The value in parenthesis denotes the holdings in July 2017:

Russia has dumped most of its holdings, reducing them from $153 billion in May 2013 to $14.9 billion by May 2018, and has roughly kept them steady at this level. Russia’s Treasury holdings are now among the small fry.

On net, foreign investors reduced their holdings of Treasury securities in October by $125 billion from a year ago to $6.2 trillion.

So who is buying?

This is how the gargantuan US debt is carved up as of October, in trillion dollars: 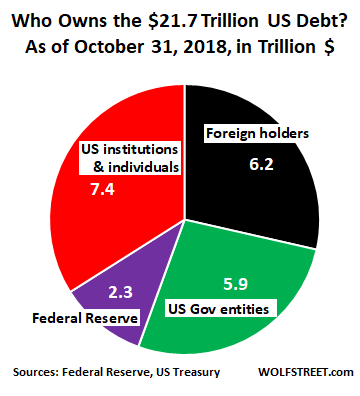 The simple fact that long-term Treasury yields have been low relative to short-term yields (which are more responsive to Fed rate hikes), and that the yield curve has become nearly flat shows just how much desperate buying-pressure there is, especially when there is turbulence in the stock market and investors seek the safety of Treasury debt.

The 10-year yield, while up sharply from a year and two years ago, has been vacillating between 2.8% and 3.25% since early February. The massive buying-pressure in the Treasury market, in part triggered by stock-market sell-offs, has been easily mopping up the flood of new Treasury debt that the government has been issuing at an average rate of $123 billion a month over the past six months.

But foreign investors, as alluring as these Treasury yields may be in a negative-interest-rate world, would take on currency risk, and hedging against it has become prohibitively expensive at current Treasury yields.

Peak “Everything Bubble?” The data is piling up. A deep dive in my latest podcast, THE WOLF STREET REPORT

78 comments for “Who Exactly Mopped up $1.33 Trillion of New US Government Debt over the Past 12 months?”