If you blinked, you missed it.

The price of natural gas for December delivery plunged 19% on Thursday, the biggest percentage plunge since February 2003.

This comes after futures prices had skyrocketed 20% on Wednesday to $4.931 per million Btu intraday, before settling at $4.837, the highest settlement price since February 2014 – when “polar vortex” entered into everyday language in the US. It was a gain of 19% for the day, the biggest percentage gain since 2004. Today’s plunge took the price back to $3.899 at the moment, where it had been on Monday. If you blinked you missed it: 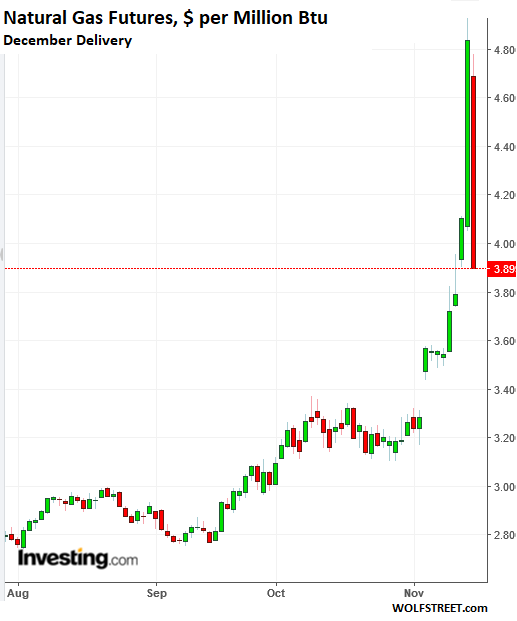 The spike yesterday was driven by “a sharp cold revision in the winter weather outlook,” according to a commodities strategist at Morgan Stanley, cited by Bloomberg. “We see modest downside from here assuming current weather forecasts, but a very wide range of potential short-term prices,” he said.

Speculative fever goes both ways. Today was impacted more than anything by the hangover from yesterday’s spike that completed a 45% run-up since November 2. Time to cash out.

And then there was the Weekly Natural Gas Storage Report, released this morning by the EIA. It was a cold shower, after the drunken party yesterday.

Turns out, thanks to surging production, 39 billion cubic feet were added during the latest reporting week to underground storage facilities across the US. Over the past five years on average – with the colder season having already started at this week in November — natural gas levels in storage would drop by 15.6 billion cubic feet during that week.

It wasn’t a total surprise, though it was higher than the 34 billion cubic feet projected on average by the 10 analysts surveyed by the Wall Street Journal.

Nevertheless, total natural gas levels have ended the “injection season” – generally defined as April 1 through October 31, when levels rise for winter use – at the lowest level since 2005.

To add to the mix of conflicting fundamentals, natural gas production in the US has surged as a result of the fracking boom, and even the oil & gas bust, when a number of smaller producers went bankrupt in 2015 and 2016, has only made a smallish dent into it: 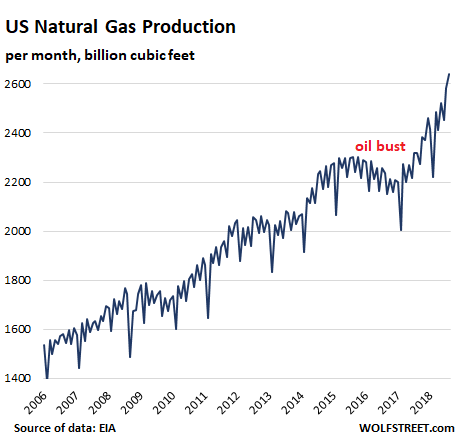 And natural gas exports have surged. The US imports and exports natural gas from and to Canada, based on regional and seasonal demand. It also exports large amounts via pipelines to Mexico, and in recent years has started to export liquefied natural gas (LNG) via tanker to destinations around the world. In February 2017, the US exported more natural gas than it imported for the first time, and thus became a “net exporter” (exports exceed imports). That trend has since grown, with net exports reaching 65 billion cubic feet in August, a drain on what would otherwise be a natural gas glut: 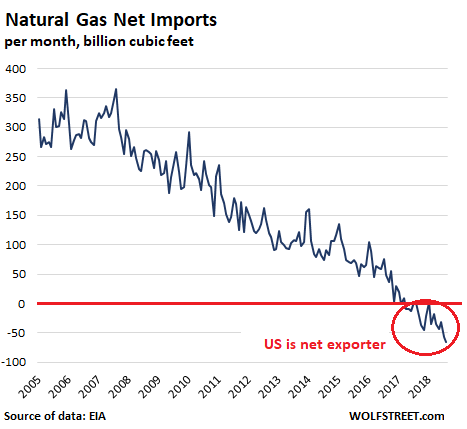 But production, exports, and medium-term weather forecasts neither explain the 45% surge after November 2, nor the 19% plunge today, that wiped out over half of the surge this month. It was just all good speculative fun. Easy come, easy go. On a fundamental basis, given the continued spike in production, it would take a very cold and long winter in the US to cause a natural gas shortage.