This will dog the stock market going forward.

Fixed-income investors – a financially conservative bunch buying Treasury securities, FDIC-insured CDs, and similar products that largely eliminate risk – have been getting crushed for a decade: Except for brief periods when inflation dipped to near zero or below zero, their minuscule returns have been eaten up by inflation, or worse, they lost money after inflation, as was the case with shorter-term Treasuries and just about all savings products. But it has ended.

The Consumer Price Index (CPI) rose 2.3% in September (2.27%), compared to September a year ago, the Bureau of Labor Statistics reported this morning. This was down from the 2.9% increase in July. These numbers are volatile, but the trend is pretty clear: Outside of the Oil Bust and a few quarters during the Financial Crisis, inflation is a fixture in the US economy: 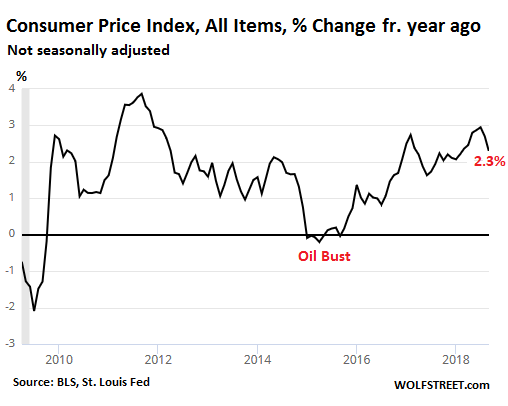 The CPI without food and energy – “core CPI” – rose 2.2% in September. Cost of shelter rose 3.3%. Cost of transportation services rose 4.0%. So prices are going up as measured by CPI.

What has changed is that interest rates and yields are also going up, and they’re now higher than inflation as measured by CPI across nearly the entire spectrum of US Treasury securities – and if you shop around, across many CDs too.

This ends a decade of “financial repression” — a condition when the Fed repressed interest rates below the rate of inflation.

The chart below shows the US Treasury yield curve across the maturity spectrum, from 1-month to 30 years, at the close yesterday. The 1-month yield, at 2.18%, was the only yield still below the rate of inflation. The 3-month yield at 2.27% is right on top of CPI (green line). Every Treasury security with a maturity longer than three months is beating inflation. 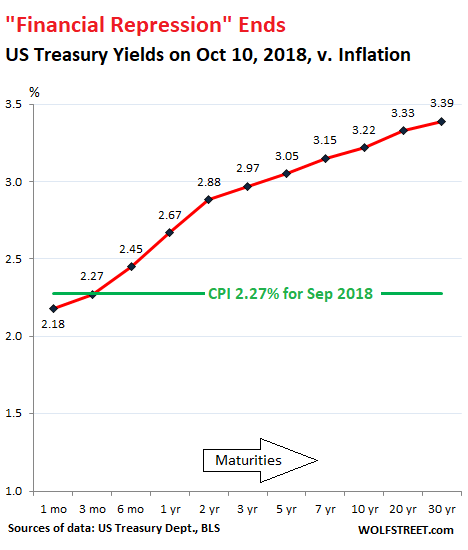 Savings products are showing similar trends, but you may have to go shopping because your own bank may offer only stale peanuts to its loyal customers.

The average 12-month CD rate as of Monday, according to the FDIC, was just 0.47%, though it has more than doubled over the past 18 months; and the average savings account rate was an imperceptibly microscopic 0.09%. So on average, loyal bank customers are still getting screwed. But for those out shopping for better returns, there are now plenty of options. Here are some examples.

In terms of CDs, savers may have to check with their brokers for “brokered CDs.” These are FDIC-insured CDs offered by banks through brokers to attract new deposits. Banks may not offer their own customers the same deals.

For example, Charles Schwab’s brokerage offers FDIC-insured CDs with maturities of three months to 10 years, from a variety of banks. Here are some of the highest-yielding CDs by maturity (may vary by zip code):

Other brokers offer similar products with interest rates above the rate of inflation.

In terms of FDIC-insured savings accounts, among prominent candidates duking it out publicly to attract deposits are PNC Bank offering 2.20% for their online savings account; or American Express’s Personal Savings bank and Goldman Sachs’s Marcus, both offering 1.90%. These rates still lag inflation, but savings accounts are liquid, allowing customers to withdraw money without notice and without penalty. If you need to keep some funds liquid while waiting for a “buying opportunity” that might suddenly crop up, those are options.

[This always comes up, so here we go: Before you venture into brokered CDs and other savings products, make sure you know the FDIC rules, including those governing IRA accounts. If you bank at Citibank, and you want to buy a Citibank CD through your broker, read the rules first. However, you can own CDs from different banks, each CD being FDIC-insured up to the limit.]

For now at least, this marks the end of an era. In the US, the Fed wielded “financial repression” as an instrument to screw many fixed-income investors and all savers for a decade, for the benefit of borrowers, leveraged speculators, and all those holding assets whose values inflated in the process. But this era of financial repression is now over.

What does that mean for those assets that have been inflated for a decade at the expense of savers?

The S&P 500 dividend yield, at 1.89%, is no longer attractive at current stock prices. In addition, companies are free to slash their dividends – which happens during rough times for the company or the market. So dividend investors are taking significant risks for so-so yields.

Suddenly, many investors are beginning to struggle with a question: Would I rather make 2.7% guaranteed risk-free for a year, such as with Treasury securities, or risk losing 10% or 20% as I might in the stock market?  The market could surge another 15%, but it could also do the opposite. Year-to-date, the S&P 500, after all the gyrations and volatility, is up only 2.0% (last time I looked) and is potentially just a rough day or two away from turning negative for the year.

Some stocks have plunged, while others have surged this year, and as they say, results may vary.

But the relationship between risk and reward has changed. For a decade, so-called “risk-free” investments – nothing is totally “risk free,” but this is close – just about guaranteed a loss after inflation and were a terrible choice. But now they’re a reasonable choice, buy guaranteeing a gain after inflation in a world where nearly all assets are highly inflated and where volatility rules. They now effectively compete with high-risk assets on the risk-reward spectrum.

Some of these high-risk assets were touted last year as the best thing since sliced bread, and they experienced much higher returns last year and into January this year, such as Emerging Market equities and bonds, but have gotten crushed since. For example, the iShares JPMorgan USD Emerging Markets Bond ETF (EMB) has dropped 13% since January 26, and the MSCI EM equity index in US dollars has plunged 25% since January 26.

As investors realize that, indeed, they can lose money, and that capital preservation is a thing, risk-free assets that beat inflation are suddenly appealing, and will become even more appealing as the Fed continues to raise rates. And this is one of the factors that will dog the markets going forward. It’s all part of what the Fed is trying to accomplish by, as it says, “removing accommodation.”

Japan has monetized 50% of its national debt. Why has there not been a surge of inflation? And why can’t the Fed restart QE and do the same? Read…  I Was Asked: Why Did All this Money-Printing Not Trigger Massive Inflation?

103 comments for “Amid Market Rout, Decade of “Financial Repression” Ends, Capital Preservation Suddenly is a Thing”