With natural diamonds not so hot, De Beers is venturing into man-made diamonds with a price war.

By Mining.com via Safehaven.com:

Anglo American’s De Beers, the world’s No.1 diamond miner by value, has just had the lowest sales for its seventh cycle since it began releasing data in 2016, as it let customers delay acquiring smaller stones for the first time.

Sales for the cycle stood at a provisional $505 million, down 5.5 percent from the $533 million obtained in the previous cycle of the year and 0.4 percent from $507 million for same period in 2017.

The unusual move (De Beers is known for requiring buyers to take what’s offered) says lots about the state of the low-end diamond market. The last time the company did something similar, in fact, was two years ago, when India’s move to ban high-value currency notes pushed down demand.

Sales were down $134 million, or 21 percent compared to the same cycle in 2016, when De Beers began releasing this kind of data.

The diamond giant has about 80 handpicked clients called Sightholders who are allocated parcels of diamonds sorted and aggregated in Gaborone. The 10 annual sales events are known as sights.

De Beers’ new strategy for small stones, paired with its looming entry into the lab-grown stones market, have many in the industry worrying about prices.

Cheaper diamonds, which are often small and low quality, are selling for a lot less now than five years ago. And when it comes to synthetic stones, De Beers’ entry in the market will create a big price gap between mined and lab diamonds, pressuring rivals that specialize in synthesized stones at the same time.

No wonder competitors are worried. The lab-grown industry has filed a complaint with the U.S. Federal Trade Commission, accusing De Beers of price dumping and predatory pricing.

In 2016, De Beers recorded sales of $639 million for the seventh of its tenth annual sales events. That is $134 million or 21 percent more than what it just made after letting buyers reject small, low-quality stones. That means that, to date, 2018 is shaping to be the worst in terms of sales for the Beers in the past two years, with combined sales of $3.93 billion against the previous year’s $4 billion and 2016’s sales of $4.12 billion (chart courtesy of De Beers). 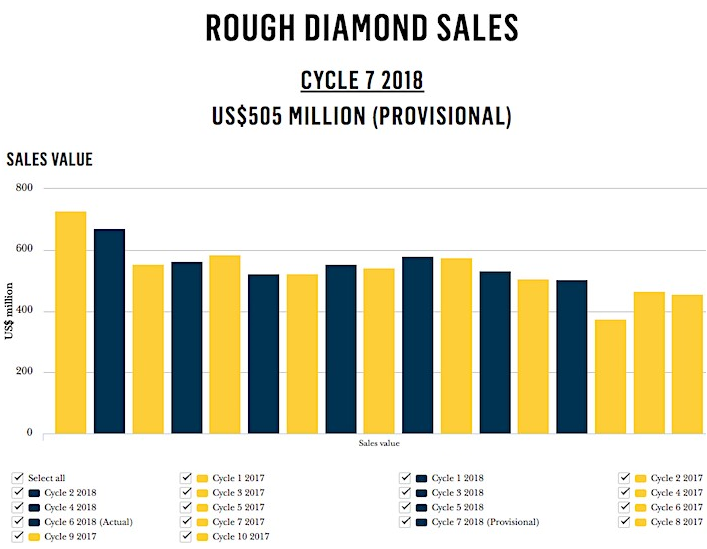 The dip is sales comes despite demand has remained stable ahead of the Hong Kong Jewellery & Gem Fair, at least according to what Cleaver said. The exhibit, which takes place from Friday this week to Tuesday next week, last year reportedly attracted 3,695 exhibitors and 59,122 buyers. By Mining.com via Safehaven.com.

49 comments for “Diamonds May be Forever, High Prices Are Not”