What the Bureau of Economic Analysis released today as part of its GDP report was a huge pile of revisions and adjustments going back years. It included an adjustment to the tune of nearly $1 trillion in “real” GDP. And it lowered further its already low measure of inflation.

Based on this revised data, second-quarter “real” GDP (adjusted for inflation) increased at a seasonally adjusted annual rate of 4.1% from the prior quarter. Annual rate means that if GDP continues to increase for four quarters in a row at the current rate, the 12-month GDP growth would be 4.1%. This was the highest growth rate since Q3 2014: 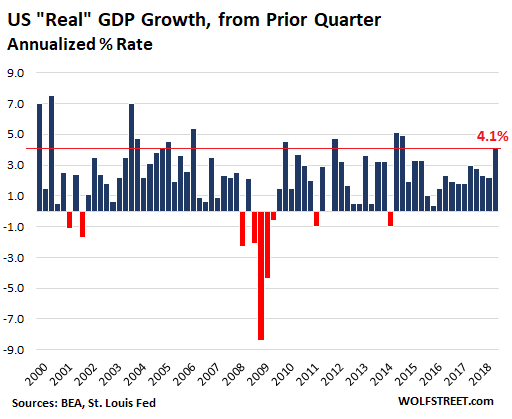 The above measure of “real” GDP – the change from prior quarter, but at an annualized rate – is the most volatile measure, producing the biggest-looking results, both up and down, as you can see in the above chart with a plunge of -8.4% in Q4 2008. Few or no other major countries use this measure for that reason.

A less volatile measure and producing less big-looking results is the 12-month change in “real” GDP, which the BEA’s data set also provides. This is the inflation adjusted, seasonally adjusted annual rate of GDP growth – in other words, how GDP did over the past 12 months. For the 12 months ending in Q2, it rose 2.8%. 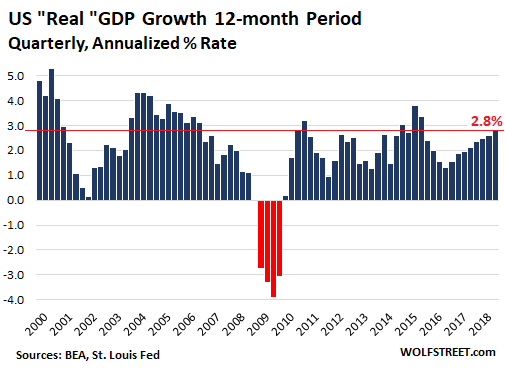 The BEA also performed adjustments to the entire pile of GDP data and classifications (summary is here). This happens about every five years. It says:

Comprehensive updates of the National Income and Product Accounts (NIPAs), which are carried out about every five years, are an important part of BEA’s regular process for improving and modernizing its accounts to keep pace with the ever-changing U.S. economy. Updates incorporate newly available and more comprehensive source data, as well as improved estimation methodologies. The timespan for this year’s comprehensive update is 1929 through the first quarter 2018.

These revisions, updates, and adjustments impacted many aspects of the entire pile of national data. But one adjustment stood out, an increase in “real” GDP by nearly $1 trillion, from $17.37 trillion in Q1 (unrevised) to $18.32 trillion in Q1 (revised) – a difference of $952 billion. 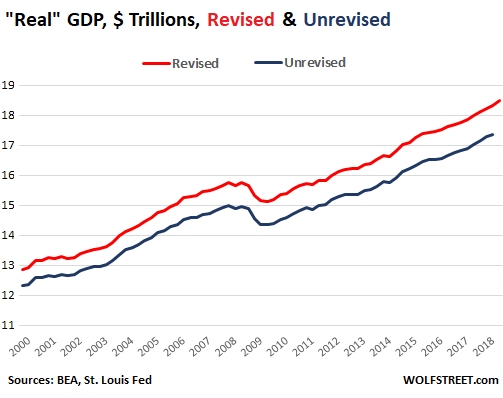 What caused this to happen? A change in the calculation of “real” GDP from using 2009 dollars to using 2012 dollars, and a reduction in the inflation index used for “real” GDP calculations. From the the BEA:

For 2012–2017, the average rate of change in the prices paid by U.S. residents, as measured by the gross domestic purchasers’ price index, was 1.2 percent, 0.1 percentage point lower than in the previously published estimates.

And that previous “average rate of change” in prices paid by consumers of 1.3% per year over the five years, was already ludicrously low, given the actual price increases experienced by most consumers. But now it has been reduced to just 1.2% over the five years. A lower inflation rate used to deflate “nominal” GDP translates into higher “real” GDP.

But nominal GDP, which is not impacted by inflation adjustments, barely changed. I overlaid the data for revised (red line) and unrevised (blue line) “nominal” GDP: 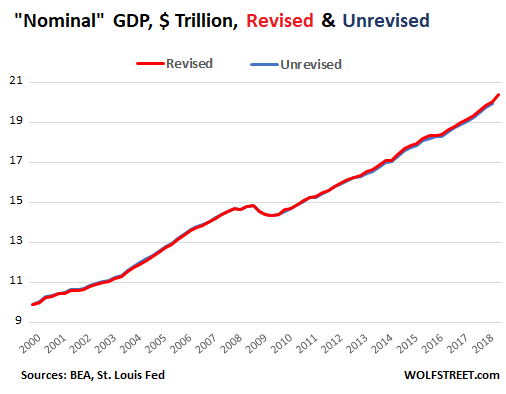 The fact that “nominal” GDP was barely impacted by any of the countless adjustments and revisions today, though “real” GDP jumped by nearly $1 trillion, shows that the adjustments that mattered for “real” GDP were the switch to 2012 dollars and the downward revisions in the prices-paid index. “Real” GDP is immensely impacted by the inflation measure used to deflate “nominal” GDP, and adjustments have an outsized impact over time.

55 comments for “The Big Adjustments in “Real” GDP”