The request is “essential to Tesla’s continued operation.”

Tesla burned $1.1 billion in cash in Q1 and likely more in Q2 – we’ll find out on August 1. It cut its workforce by 9% in June and promised to cut other spending. CEO Musk told the entire world in a bizarre earnings call that he didn’t “want to” raise new capital in 2018, though Tesla had only $2.7 billion in cash at the end of last quarter. No one can figure out how the math is supposed to work out…. Well things are getting pretty tight, it seems, and the year is only half-over.

In a memo that a global supply manager at Tesla (TSLA) sent to some suppliers last week, the company has asked the suppliers to refund what it called a meaningful amount of money of what it had already paid these suppliers since 2016; the purpose of these retroactive discounts is to help Tesla become profitable, it said. The memo was reviewed by The Wall Street Journal and reported Sunday evening.

According to the memo, the request for cash back is, as the WSJ put it, “essential to Tesla’s continued operation.”

The memo said this cash back would be like an investment in Tesla “to continue the long-term growth between both players,” in the words of the WSJ.

The memo said that all suppliers were being asked to fork over this cash back so that Tesla could become profitable. But it remains unclear, the WSJ said, how many suppliers were asked for a discount on contracted spending amounts retroactively.

Some of the suppliers that the WSJ contacted about the retroactive cash-back request told the WSJ they were unaware of it.

The WSJ reached out to Tesla:

Tesla declined to comment on the specific memo. But it confirmed it is seeking price reductions from suppliers for projects, some of which date back to 2016, and some of which haven’t been completed. The company called such requests a standard part of procurement negotiations to improve its competitive advantage, especially as it ramps up Model 3 production.

Supply-chain consultants say sometimes auto makers will demand a reduction in price for a current contract going forward or use leverage of awarding a new deal to get upfront savings on a contract,” the WSJ pointed out. “But they say it is unusual for an auto maker to ask for a refund for past work.

“It’s simply ludicrous and it just shows that Tesla is desperate right now,” Dennis Virag, a manufacturing consultant who has worked in the auto industry for 40 years, told the WSJ. He said this kind of solicitation could put suppliers in financial peril and jeopardize Tesla’s future supply of car parts. “They’re worried about their profitability but they don’t care about their suppliers’ profitability.”

Tesla really needs all the help it can get.  In Q1, it lost $710 million, its largest net loss ever. While total revenues – automotive and energy combined – rose 26% in Q1, it’s net losses jumped 114%, on the time-honored business model: the more it sells, the more it loses. 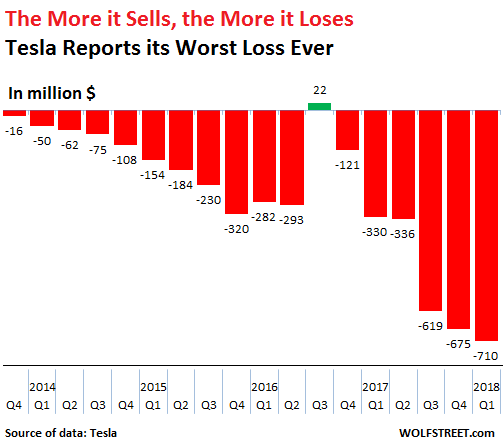 In addition to burning through cash at a breath-taking pace, Tesla has some obligations coming up. The WSJ:

At this point, given Tesla’s current share price, its investors really don’t care about anything other than doing whatever they can to keep the share price high. So it’s in their own best interest to support the shares, they think. A market capitalization of over $50 billion guarantees that Tesla can always raise more billions and burn through them in no time. That share price is Tesla’s lifeblood. Few other companies are so utterly dependent on an astronomically inflated share price for their survival. Once Tesla loses its ability to raise fresh cash to burn through, it’s over.

At least one of them is very wrong: Atlanta Fed GDPNow v. New York Fed Nowcast. Read…  Is the US Economy Really Going to Pop 4.5% in Q2?