At least one of them is very wrong: Atlanta Fed GDPNow v. New York Fed Nowcast.

On July 27, the Bureau of Economic Analysis (BEA) will release its “advance estimate” of GDP growth for the second quarter. Based on preliminary and incomplete data, this number is what everyone puts under the microscope.

On August 29, the BEA will release its “second estimate” for Q2 GDP growth, which will include more data. On September 27, the BEA will release its “third estimate.” In future years, it will further revise GDP growth as more data becomes available or gets revised. Only China releases a GDP growth rate that is perfect on day one, is always very high, comes out before the US release, and never needs to be revised.

But in the US, even as the revised numbers get more accurate, the least complete and reliable “advance estimate” gets the most media attention.

Outside the BEA, an army of economists struggle to estimate what the “advance estimate” of GDP growth is going to be – including in the Federal Reserve machinery. The Atlanta Fed with its GDPNow and the New York Fed with its Nowcast just came out with very different forecasts.

The Atlanta Fed is out with a huge GDP growth number for Q2, after raising it from already high levels in early July: Its nowcast hit 4.5% on July 16 and stayed there on July 18 after real consumer spending for May, industrial production, real private fixed investment, and real private inventory investment data were released.

These nowcasts are supposed to get more accurate as data for the quarter accumulates. The quarter is over, and June data is starting to be included – though June’s consumer spending data, a biggie, is still missing: 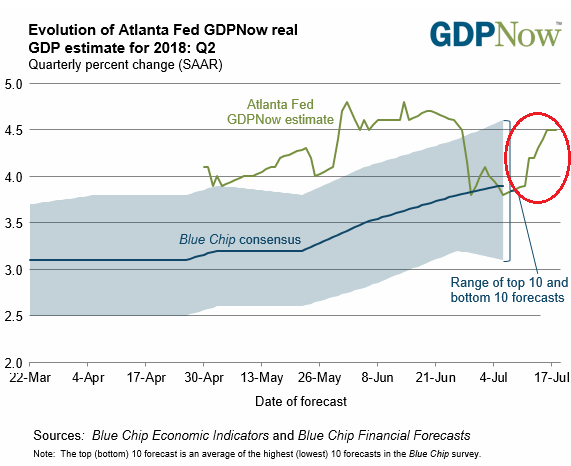 The GDP estimates of the “Blue Chip” economists surveyed by the Atlanta Fed are in the range between 3.3% and 4.6% (shaded area). So the Atlanta Fed’s 4.5% is at the top of the range of the Blue Chip economists. That says something!

Annual rate means that if the economy grows for four quarters in a row at the rate of the current quarter, the total annual growth would be 4.5% compared to the prior year. 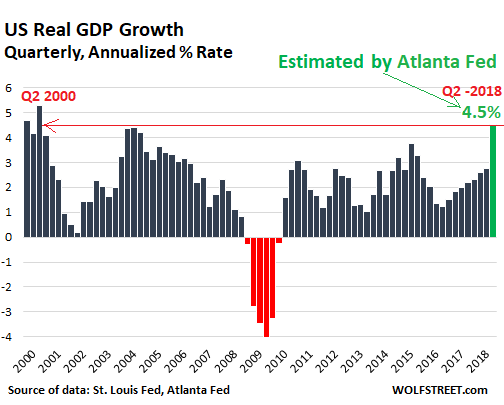 So the Atlanta Fed’s nowcast is truly an outlier – practically a miracle.

However, the New York Fed’s nowcast is raining on this parade. Released every Friday, it peaked on June 1 at 3.26% and has since been in decline, going the opposite direction of the Atlanta Fed’s GDPNow. Friday’s estimate dropped to 2.69%, the lowest in the series for Q2: 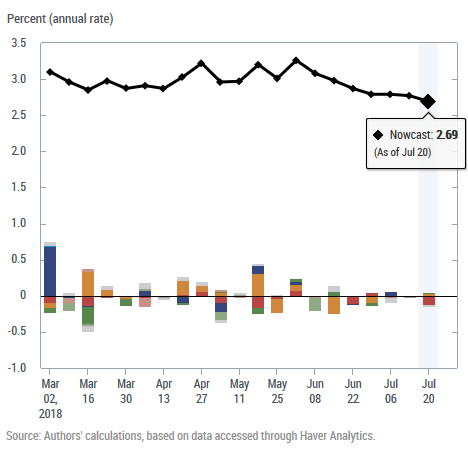 The colored columns in the chart above show the impact of each broad category of data on the Nowcast. And since the beginning of June, there were more and bigger negatives than positives. Not very inspiring.These are the broad categories: 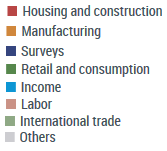 So now big is an annualized rate of GDP growth of 2.7%? It’s still strong given recent growth patterns, but it’s smaller than the growth in five of the quarters since the Financial Crisis, including Q1 2018. While the Atlanta Fed’s GDPNow is a true outlier, the New York Fed’s nowcast (green column) is well within the post-Financial-Crisis normal-ish range: 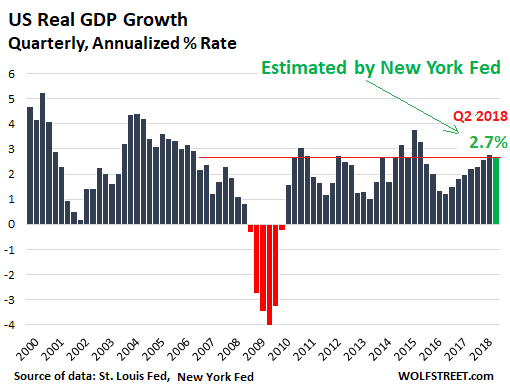 So which estimate will be closer to BEA’s “advance estimate” when it’s released on July 27? From where I sit, the New York Fed’s estimate looks more realistic than the Atlanta Fed’s estimate: 4.5% is just a huge number for the US economy, given the growth history of the past 20 years. Frankly, even hitting the New York Fed’s 2.7% growth rate would be good. We will find out on July 27. Meanwhile, I’m wondering, why do they differ this much?

One possibility is that the economy in Q2 hit it out of the ballpark, and only the Atlanta Fed’s model saw it. But I doubt that.

Another possibility is inflation. The annualized GDP growth rates are adjusted for inflation – so “real” GDP growth rates. Consumer price inflation has been rising sharply. In June, inflation as measured by CPI, rose 2.9%, the biggest increase since February 2012. The Atlanta Fed’s model might not have fully captured the impact of inflation.

The reason I’m wondering about this is because “real” consumer spending, which accounts for nearly 70% of GDP, rose only 2.6% in April year-over-year, and 2.3% in May. June’s data will be released later this month. But with real consumer spending growing at only 2.3%, it’s nearly impossible to get to 4.5% real GDP growth.

So for now, the Atlanta Fed’s GDPNow estimate of 4.5% GDP growth in Q2 is a mystery seeking an explanation.

How the “Yield Curves” Stack Up in central-bank manipulated bond markets. Read…  Which Yield Curve “Inverts” First? US, Japan, Germany, or China?