“It feels like we’re about 12 months away, but we could get into extended innings.”

As corporate indebtedness in the US has reached precarious heights, and as risks are piling up, in an environment of rising interest rates and a hawkish Fed, the smart money is getting ready.

“Distressed debt” is defined as junk-rated debt that sports yields that are at least 10 percentage points above equivalent US Treasury yields.

Distressed-debt investors can make big returns by buying bonds for cents on the dollar during times of economic stress, of companies that they believe will make it through the cycle without defaulting. In this scenario, a distressed bond might sell for 40 cents on the dollar, and two years later, the company is still intact and the credit squeeze is resolved, and now the bond is worth face value. For those two years, the bond paid a huge yield to investors that bought at 40 cents on the dollar – and the profit might be 200% in capital gains and interest.

The thing is: The junk-bond market has been booming. There’s no credit squeeze yet. And the riskiest end is flush as the “dumb money” is still chasing yield. And for the smart money, there’s not much to pick at the moment; but down the road, the future looks bright.

S&P Global tracks distressed debt in its US High Yield Corporate Distressed Bond Index. The index peaked in early July 2014, on the eve of the oil bust. Over the next 18 months, it plunged 56% as the oil bust was wreaking havoc on oil-and-gas bonds. But on February 11, 2016, the index bottomed out. New money began flowing into the oil-and-gas sector. Banks started lending again. The surviving bonds soared. And the index skyrocketed 113% in 28 months: 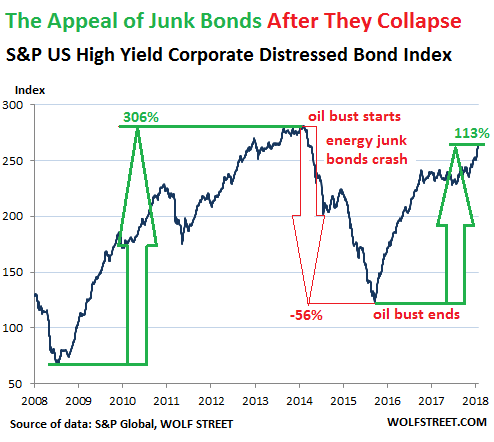 The smart money that got the timing right made huge gains. But the hypothetical buy-and-holder, whose portfolio mirrors the bonds in the index, would have seen their investments plunge and then recover mostly, but they would still be down 6%.

And now investment funds – they’re all aware of the dynamics in the chart above – are setting up for the next big selloff in the junk-bond market.

In total, seven distressed-debt funds have raised about $15.4 billion so far in 2018, according to the Financial Times. GSO Capital Solutions Fund III, which closed in April, raised $7.4 billion, the fourth-biggest distressed debt fundraising ever. The FT:

Jason Mudrick, founder of $1.9-billion Mudrick Capital, is marketing a second distressed investment fund, according to people with knowledge of the matter. The new fund will lock up investors’ money for five years and only charge fees once the capital commitment is invested, according to the people. The fundraising is set to close on December 1.

“This economy is roaring right now,” said Mr Mudrick, who declined to comment directly on the fundraising, citing US regulation. “It’s rocking and rolling. But that’s just not sustainable . . . My job is not to predict exactly when [the turn in the cycle] happens but to have the platform ready when it does.”

Mr. Mudrick believes it is a backdrop that will create ripe conditions for distressed debt investors when economic conditions do worsen. The New York-based fund generated returns of almost 40% in 2016 wagering that energy bonds hit by a declining oil price would recover, according to a hedge fund performance document produced by HSBC and seen by the Financial Times.

Among the other funds is Strategic Value Partners, which raised nearly $3 billion.

Another distressed-debt fund, DSC Meridian Capital, was launched at the start of this month. “I think we’ll be doing a lot of distressed stuff when there’s distressed stuff to do,” the founder, Sheru Chowdhry, formerly co-portfolio manager of the Paulson Credit Opportunities fund, told the FT. “It feels like we’re about 12 months away, but we could get into extended innings.”

Investing successfully in distressed debt is a special expertise. When the bottom falls out, distressed debt becomes an illiquid market. When forced selling sets in as bond mutual funds and others that have to meet redemptions by nervous retail investors, while buyers simply evaporate, incredible deals can be made. But the risk of total wipeout is large. Many distressed bonds get crushed in bankruptcy. This is a fate to be avoided.

To succeed, investors – usually teams – have to do some heavy manual lifting. They must not only do a solid credit analysis of the company and have a grip on the fine points of the industry, but they must also be able to understand the nuances of debt covenants, the details of the collateral, and a million other things. And they must have a deep understanding of global market trends and industry cycles. This is the smart money, and it’s setting up for the next credit event.

Emerging market “turmoil” is already brewing as the Hot Money is fleeing. Read… Chasing Yield during ZIRP & NIRP Evidently Starved Human Brains of Oxygen. Now the Price Is Due