The peso drops again, inflation surges, nothing is fixed.

Argentina was able to refinance about $26 billion in maturing peso-denominated short-term debt, called Lebacs, but at a huge cost, after asking the IMF for a bailout loan – a “high access stand-by arrangement” that will come with creditor-imposed conditions – and after wild gyrations by the central bank that included blowing billions of scarce dollars to prop up the peso at dismally low levels, and jacking up interest rates three times to 40%.

The peso, which had been plunging for days despite these gyrations, plunged another 8% on Monday to ARS 25.30 to the USD, on doubts that the central bank (BCRA) would be able to refinance the Lebacs on Tuesday. On Tuesday, as the BCRA was able to “roll over” the debt, the peso bounced, but regaining only half of what it had lost during Monday’s plunge. But on Wednesday, it lost ground again, dropping nearly 1% (this chart shows the value of 1 peso in USD): 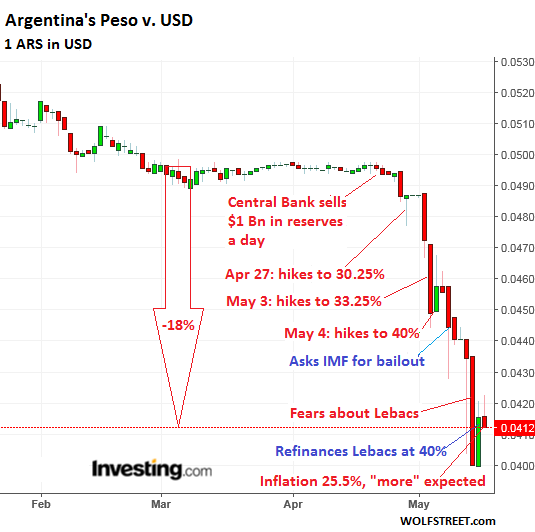 On Tuesday, BCRA announced that it was able to sell enough peso-denominated Lebacs to pay off all the maturing Lebacs ($25.6 billion at the current exchange rate) plus sell additional Lebacs worth $200 million. Instant disaster has been kicked down the road.

But at what cost? To find buyers for the Lebacs at the auction, BCRA offered interest rates ranging from 38% for the 154-day Lebac to 40% for the 36-day Lebac.

In addition, also on Tuesday, BCRA said that it sold $791 million in dollars – scare foreign exchange reserves – to buy pesos in the spot market to prop up the peso, after having already sold billions of dollars in the prior days.

“It was a successful auction,” Goldman Sachs economist Alberto Ramos told the Wall Street Journal. “But of course they had to commit to pay a very high distressed level of interest rates…this is not a sustainable path.”

Tuesday, as the dust from the Lebacs roll-over was still trying to settle, the statistics agency released the latest batch of dismal inflation figures: The consumer price index had jumped 2.7% from March to April, pushing the 12-month inflation rate to 25.5%.

Goods prices jumped 20.7% compared to a year ago, and prices of services skyrocketed 34.8%, not precisely helped by massive increases in utilities (water, electricity, gas, etc.).

After promising for months that inflation would settle down, the government revisited that promise when Treasury Minister Nicolas Dujovne, told foreign media that, due to the falling peso, he expected “somewhat less growth and more inflation.”

A further deepening of the crisis has thus been successfully kicked down the road, but a huge cost. This is the result when investors that are supposed to fund the governments’ promises keep getting burned by years of currency devaluation, run-away inflation, serial defaults, widening deficits, and large amounts of foreign-currency denominated debts. But for speculators trying to make a buck in this punitive environment on short-term securities offering 40% annual yield. denominated in a currency that plunges in value, it may be worth the risk.

When the “hot money” gets antsy, a currency crisis morphs into a debt crisis. Read…  As US Dollar & Interest Rates Rise, All Heck Breaks Loose in Emerging Market Currencies

22 comments for “Argentina’s Crisis Gets Kicked Down the Road, but at What Cost?”