That would be a first, but it might be happening. Everything in slow motion, even market declines?

There is nothing like a good shot of leverage to fire up the stock market. How much leverage is out there is actually a mystery, given that there are various forms of stock-market leverage that are not tracked, including leverage at the institutional level and “securities backed loans” offered by brokers to their clients (here’s an example of how these SBLs can blow up).

But one type of stock-market leverage is measured: “margin debt” – the amount individual and institutional investors borrow from their brokers against their portfolios. Margin debt had surged by $22.9 billion in January to a new record of $665.7 billion, the last gasp of the phenomenal Trump rally that ended January 26. But in February, as the sell-off was rattling some nerves, margin debt dropped by $20.7 billion to $645.1 billion.

By March, those worries have settled down, and margin debt ticked up a bit to $645.2 billion, but remained $20.5 billion below January, according to FINRA, which regulates member brokerage firms and exchange markets, and which has taken over margin-debt reporting from the NYSE.

In January, days before the sell-off began, FINRA warned about the levels of margin debt. It was “concerned,” it said, “that many investors may underestimate the risks of trading on margin and misunderstand the operation of, and reason for, margin calls.” Investors might not understand that their broker can liquidates much or all of their portfolio “under unfavorable market conditions,” when prices are crashing. “These liquidations can create substantial losses for investors,” FINRA warned. And when the bounce comes, these investors, with their portfolios cleaned out, cannot participate in it.

But this is not the scenario the markets are in at the moment. Everything is so orderly, though it’s a lot more volatile than it was during the run-up last year. And margin debt too has declined in an orderly manner:

This chart shows the longer view: 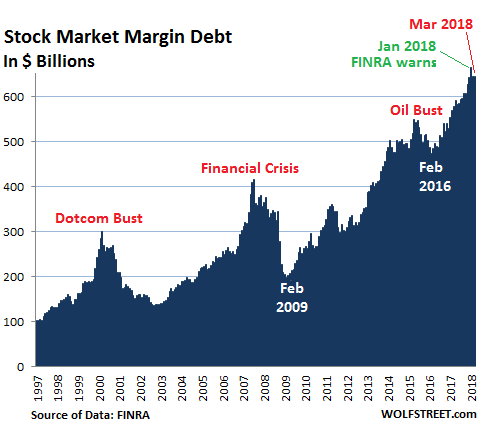 During margin debt’s peak-to-peak surge of 60%, nominal GDP (not adjusted for inflation) rose 32% and the Consumer Price Index 20%. Historically, this disconnect has had a tendency to correct via messy panicked crashes and deleveraging. The last three spikes in margin debt are indicated in the chart above. The first two were followed by market crashes. And now?

Clearly, this will correct again. It always does. But the manner in which it corrects may well be very different, more orderly rather than panicky, taking its goodly time, given the glacial pace of the Fed’s tightening and the large amounts of liquidity still in the market looking for a place to go. And this type of gradual unwinding of stock-market leverage would be a first, but it might be happening before our very eyes.

The Fed’s new paradigm: everything in slow-motion. Read…  What’s Going On in the Treasury Market?

52 comments for “An Orderly Unwind of Stock Market Leverage?”