But unlike the New York Fed yesterday, ZEW named names and pointed fingers.

Yesterday, I speculated about what might have caused the optimism of manufacturing executives in the New York Fed’s district to collapse by the most in the survey’s history. The forward-looking index plunged in the April survey more than it had during the worst month of the Financial Crisis.

The survey didn’t say why. So I speculated that it reflected the fear in Corporate America of a trade war between the US and China, not because US companies might see their exports to China get hit with retaliatory tariffs – there are woefully few manufactured exports from the US to China – but because Corporate America’s supply chains have been offshored to China and beyond, and the proposed US tariffs would make the components and materials more expensive for US manufactures, thus squeezing their profit margins extracted from offshoring.

Today, it’s the turn of Germany AG to express its fears about the trade war and slowing conditions in Germany and the Eurozone via the Financial Market Survey by the Center for European Economic Research (ZEW). But unlike the New York Fed yesterday, the ZEW report named names and pointed fingers.

The ZEW’s Indicator of Economic Sentiment for Germany in the future dropped sharply — and very unexpectedly, given how swell things are with negative interest rates and the ECB’s purchases of corporate bonds, and all. It fell by 13.3 points to -8.2, the lowest level since November 2012, when the Eurozone was still trying to dig itself out of its debt crisis.

Over the three reports since January, the index has plunged by 28.6 points. Note in the chart below that the index has remained stubbornly below the long-term average of 23.4 (green line) since July 2015: 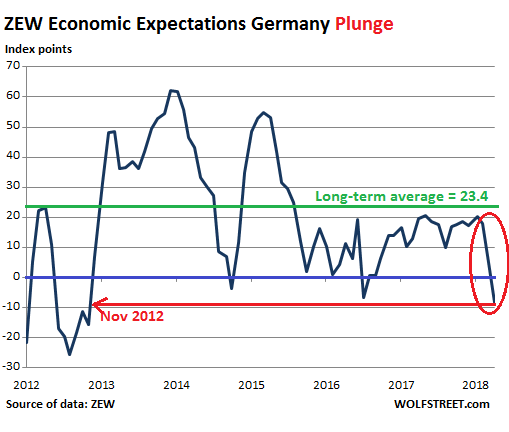 The above chart is the forward-looking sentiment indicator, thus reflecting expectations for the future. But the index for current economic conditions in Germany, a reflection of what is going on right now, edged down only a little (2.8 points), at at 87.9 remains high: 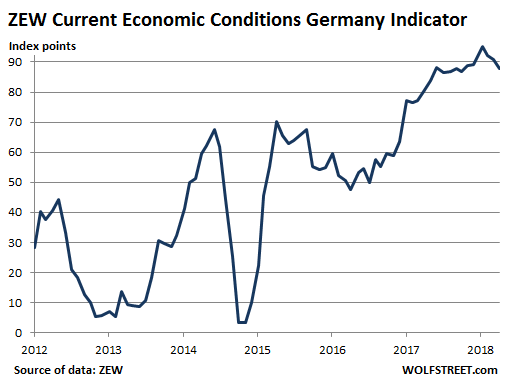 The ZEW surveys about 350 analysts from finance, research, and economic departments at banks, insurance companies, and large industrial enterprises, “as well as traders, fund managers, and investment consultants” (methodology).

“The reasons for this downturn in expectations can mainly be found in the international trade conflict with the United States,” the ZEW report explained.

It named other reasons for the decline in expectations about future economic development, including “the current situation in the Syrian war,” and internal issues, such as the “significant decline in production, exports, and retail sales in Germany in the first quarter of 2018.” So things aren’t so hunky-dory at home either at the moment.

The report blames “the same factors as in Germany,” including the “trade conflict” with the US and “the figures for production and retail sales in the first quarter of 2018” that turned out to be “surprisingly negative” – and all are “having a negative impact on the economic expectations for the Eurozone.”

So, different scenarios in the US and Germany, but similar worries: While they’re still feeling good about current economic conditions, these executives and experts have suddenly started to see some nasty clouds. Something to keep our eyes on.

Corporate America fears that a Trade War would hit supply chains in China. Read… Optimism of Manufacturers “Plunged” the Most Ever: NY Fed