But one-third of voting slots are vacant: What will the “New Fed” do?

There was a sense of relief today the Fed didn’t state clearly that there would be four rates hikes in 2018. And this was interpreted as a sign that the Fed is sticking to three rate hikes.

Not that the Fed ever states anything clearly on rate-hike days. But it does supply a lot of tea leafs to tea-leaf readers. And one pile of tea leaves is the “dot plot” that it releases four times a year, including today.

Today’s rate hike is included in the dot plot. After the 25-basis-point increase, the Fed’s target range for the federal funds rate is 1.5% to 1.75%. Rate hike number one in 2018. The “dot plot” picks up from there.

The “dot plot” is where the FOMC members indicate their projection of where the midpoint for the Fed’s target range for the federal funds rate should be by year-end. It indicates how many rate hikes each member of the FOMC envisions for 2018. 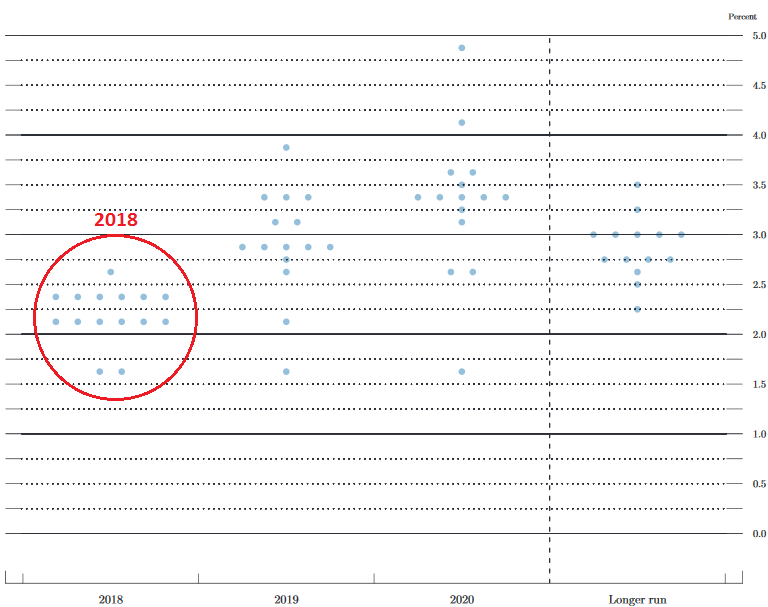 For clarity, I have enlarged and isolated the dot plot for 2018 and annotated it in red (below). Note how tight it is compared to those for future years: 12 of the 15 members are spread evenly over the three-hike and the four-hike camps. It shows that the range of disagreement is fairly narrow: 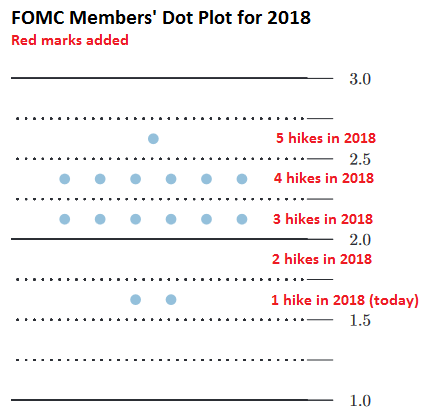 So the dot plot says that as of today:

But monetary policy is decided by vote, not by dot plot. And there are some historic uncertainties this year, including four vacant slots at the seven-member Board of Governors, which forms the core of the FOMC. These four future members will be voting as soon as they’re sworn in. But we still don’t know who the are.

The Board of Governors is an entity of the federal government, unlike the regional Federal Reserve Banks, which are owned by their member banks. The policy setting FOMC consists of the seven (now three) members of the Board of Governors who have a vote at every meeting; the President of the New York Fed, who also has a vote at every meeting; and the governors of the remaining 11 Federal Reserve Banks, who rotate annually into and out of four voting slots.

With four unfilled slots at the Board, the FOMC had only eight voting members today. When the four slots of the Board are filled – each candidate has to be nominated by the President, confirmed by the Senate, and sworn in – it will have 12 voting members. In other words, one-third of the future voting members are unknowns.

In addition, William Dudley as New York Fed president fills a slot that always votes. But he will retire over the next few months as soon as the New York Fed has decided on a replacement. This is the fifth voting slot, out of 12, that is still an unknown for later this year.

It is likely, in the current political landscape, that the new members will have a slightly more hawkish disposition on average on monetary policy than those who occupied those slots before them. The fourth rate hike this year is within a hair in today’s dot plot. And the New Fed still has to take shape.

These dang trillions are flying by so fast, they’re hard to see. Read…  US Gross National Debt Spikes $1.2 Trillion in 6 Months, Hits $21 Trillion