Investors are still blowing off the Fed. But not much longer.

CVS Health Corp. sold $40 billion of bonds on Tuesday to help fund its $69 billion acquisition of Aetna, which is still pending regulatory review that may conclude later this year. CVS will also obtain a $5 billion loan, use $4 billion in cash, and issue a lot of stock to pay for the deal. In total, CVS will take on $45 billion in debt, which is a lot for a company that is rated two notches above junk. S&P’s and Moody’s have put CVS on credit watch with negative outlook as the acquisition “will materially weaken credit metrics,” Moody’s says.

Yet there was strong demand: $120 billion in orders for $40 billion in bonds. The deal was offered in seven tranches. According to investors, the 30-year portion sold with a yield of 1.96 percentage points above the equivalent Treasury yield.

CVS won’t even need the money until later this year when the deal closes, assuming it closes. But it went out there to borrow now, rather than wait, to benefit from the still extraordinarily low interest rates in the corporate bond market and to front-run a flood of new issuance by other companies.

In addition, the US Treasury Department will issue large amounts of debt to cover the ballooning federal deficits.

And in addition, the Fed has raised rates four times since December 2016 and will likely raise rates three or four times this year, and more next year.

So CVS tried to get its bonds sold before all this hits the fan. Because bond buyers – mostly institutional investors, such as bond funds and pension funds – are still in denial. They’re still chasing yield, especially those speculating on the riskiest corporate bonds.

The average yield of junk bonds rated CCC or below – the riskiest category – was at 10.4%, according to the index that tracks them, the ICE BofAML High Yield CCC or Below Effective Yield index. This is down from about 12% in mid-December 2016, when the Fed stopped flip-flopping and embarked in serious on the current rate hike cycle.

In other words, since mid-December 2016, the Fed has hiked rates four times, in total by 1 percentage point, but over the same period, junk bond yields rated CCC or below have declined 1.5 percentage points as the bonds have rallied. 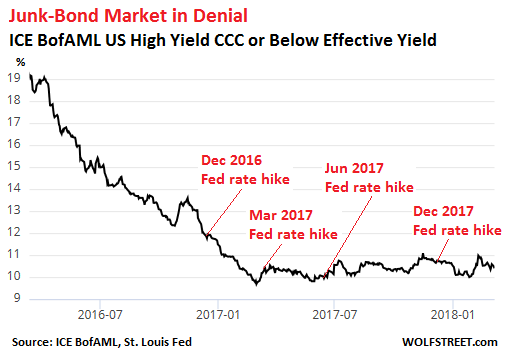 During the oil-and-gas bust, the CCC yield spiked to 21%. During the Financial Crisis, it spiked north of 40%. These are very risky bonds, and when financial conditions tighten – which is what the Fed is trying to accomplish by raising rates and unwinding QE – these companies may not be able to refinance maturing bonds or raise new money to fund their money-losing operations and pay interest. Defaults ensue. Investors normally want to be compensated for those risks, but not today.

At the high end of junk bonds, just below investment grade, the average yield of BB-rated bonds has begun to tick up in recent months. But at 4.91%, according to the ICE BofAML US High Yield BB Effective Yield index, it remains very low – about where it had been in mid-December 2016. In the longer-term chart, that little uptick over the past two months is barely visible: 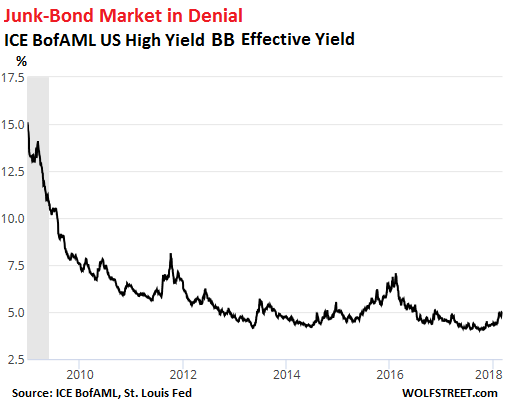 In the investment-grade arena, corporate bonds trade more in parallel with equivalent US Treasuries. According to the ICE BofAML US Corporate AA Effective Yield index, the average yield of AA-rated bonds has risen to 3.27%. While this is still very low by historical standards, it’s the highest since April 2011. So these investment-grade-rated companies have started to see their costs of capital rising — even as junk-rated companies have not: 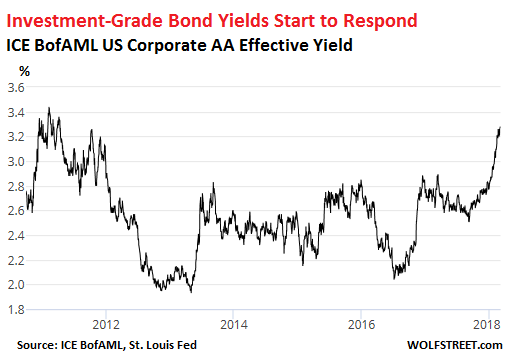 By contrast to corporate bond-market moves, the three-month Treasury yield has done this: 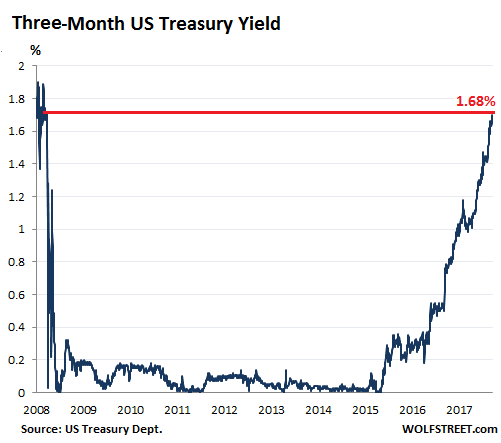 There are measures of risk premiums — what investors demand in order to take greater risks: one of them is the difference in yield (the “spread”) between junk bonds and Treasuries. This spread is now at just 3.53 percentage points, according to the ICE BofAML US High Yield Master II Option-Adjusted Spread index, barely up from historic lows. Investors are not demanding to be compensated for the large extra risks they’re taking, and they’re still blowing off the Fed: 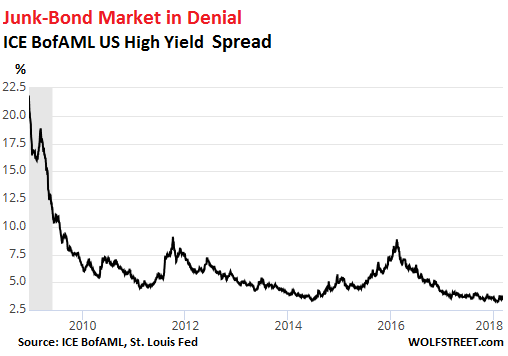 The spread between the yields of AA-rated investment grade bonds and equivalent Treasury securities has risen from a minuscule 0.52 percentage points to a still minuscule 0.64 points, and also remains near historical lows. You can barely see the uptick over the past few weeks: 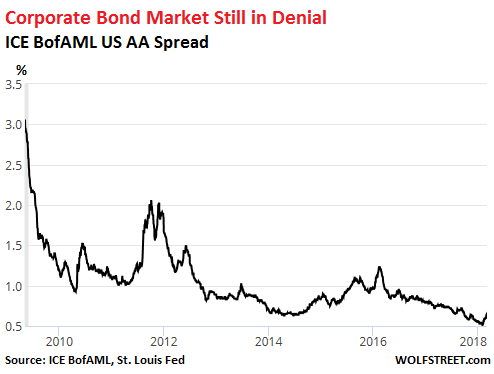 When the Fed hikes its target range for the federal funds rate, and when it sheds securities on its balance sheet – both of which it has been doing with clockwork predictability – it attempts to tighten “financial conditions” to make credit more expensive and harder to get for credit-dependent companies (and consumers) in a credit-dependent economy. It’s attempting to get investors to be more prudent and circumspect and demand to be compensated more for taking risks. But the corporate bond market continues to thumb its nose at the Fed.

The Fed will succeed in tightening financial conditions. It always does. And when this starts to click, the adjustment will be sharp and possibly harsh for those companies that have relied on cheap and easy money to fund their operations. But for now, investors are still blithely oblivious to the coming reckoning in the corporate bond market.

It started before the sell-off. Read…  Retail Investor Bullishness Collapses

29 comments for “Corporate Bond Market Gets Ready for Big Reset”