And this is just the beginning.

The year 2017 was when the US became a net exporter of natural gas for the first year in history. The production of natural gas has been surging since 2007, when fracking turned into a boom, whittling away at the need for importing natural gas via pipeline from Canada and via LNG from the global markets. Last year, according to the EIA’s just released data, the US exported 129 billion cubic feet (Bcf) more natural gas than it imported. And this is just the beginning: 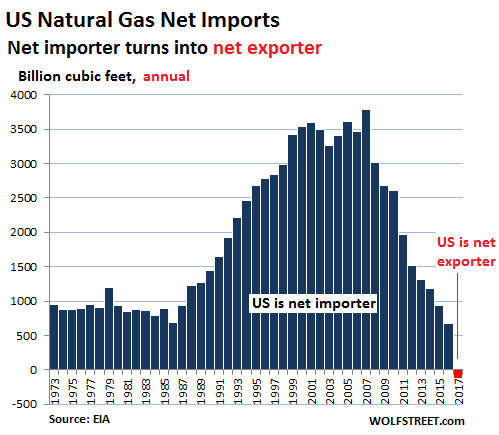 Exports to Mexico via pipeline have been rising for years as more pipelines have entered service and as Mexican power generators have switched from burning oil to burning cheap US natural gas (the US imports no natural gas from Mexico). 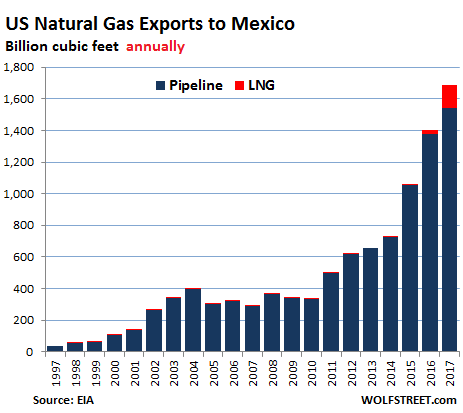 The US has a bilateral natural-gas trading relationship with Canada, both importing and exporting. Exports to Canada have surged from almost nothing in the late 1990s to a peak of 2,145 Bcf in 2016 but fell 5% in 2017 to 2,043 Bcf.

Imports from Canada, while they rose over the past two years, remain in the range established over the past two decades. But due to the surge in exports to Canada, net imports (imports minus exports) have plunged 43% from a peak of 3,600 billion cubic feet in 1999 to 2,042 Bcf: 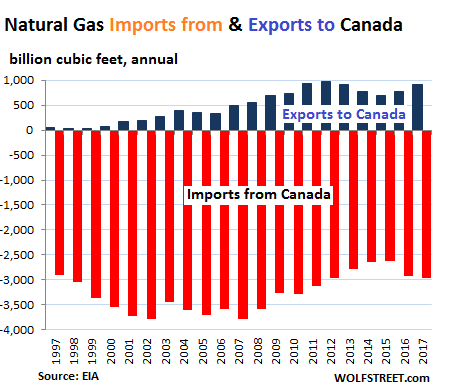 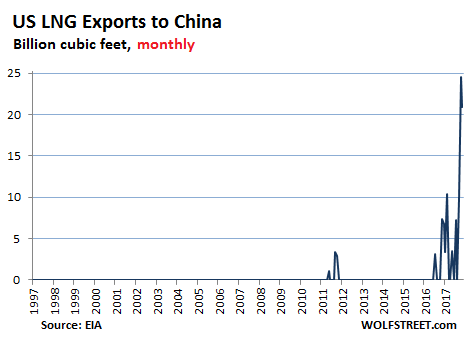 What to do with all this natural gas?

US natural gas production has been surging since the fracking boom took off in 2007. The chart below shows the monthly (not annual) production in billion cubic feet. Note the impact of the oil-and-gas bust in 2015 and 2016, when some natural gas drillers filed for bankruptcy. But since then, Wall Street opened its wallet again, and new money has flowed into the sector and production has spiked, not only from wells primarily producing natural gas but also from the renewed oil boom as many oil wells also produce natural gas — this used to be flared, but the installation of processing equipment and pipelines allows it to reach the market: 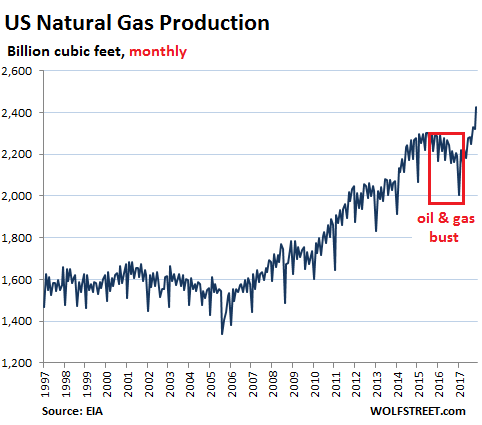 LNG exports began in earnest in early 2016 when the first liquefaction unit (“Train 1”) of Cheniere Energy’s Sabine Pass terminal in Cameron Parish, Louisiana, entered commercial service. Trains 2 and 3 followed. Train 4 is expected to enter service soon. Train 5 is under construction. Train 6 is in the planning and financing stage. All six trains combined will have a capacity of 4.2 Bcf per day.

In addition, there are five other LNG export terminals under construction, with a combined capacity of 7.5 Bcf/d, according to the Federal Energy Regulatory Commission (FERC). This would raise total LNG export capacity to nearly 12 Bcf/d over the next few years and make the US the third largest LNG exporter behind Australia and Qatar.

The LNG export trade in the US is powered by the huge price differential between natural gas in the US — where a “glut” has crushed prices since 2009 — and what large LNG importers such as Japan and Korea are paying in the global LNG markets.

Natural gas trades in the US for $2.70 per million Btu (mmBtu) at the moment. In other parts of the world, LNG fetches are massive premium. For example Japan acquired LNG in January  for an average price of $11.00/mmBtu, according to the Ministry of Economy, Trade and Industry. And this is down from the range of $16-$17/mmBtu in 2013 and 2014.

Granted, liquefying natural gas and shipping it by tanker from Louisiana to Japan comes with costs, but the price differential is still alluring for US LNG exporters who’re praying that the collapsed price of natural gas in the US remains collapsed forever – even if it bankrupts producers and eats up tens of billions of Wall Street equity and debt investments on an annual basis.

And what will US natural gas producers do when this cheap money they’re drilling into the ground is no longer available as the Fed has set out to tighten financial conditions? Because the Fed is tightening precisely to turn off the cheap money spigot. Read…  Fed’s QE Unwind Marches Forward Relentlessly

59 comments for “Momentous Shift in US Natural Gas, with Global Consequences”