What’s going on is a sell-off in the Treasury market.

On Friday, the government bond market’s “inflation expectations” rose to the highest level since September 2014. Quite a feat, considering that six months ago, economists were clamoring for the Fed to slow down its already glacial pace of rate hikes – or abandon them altogether – because of “low inflation.”

The Treasury market’s “inflation expectations” show up in the premium that investors demand for buying regular 10-year Treasury Securities over 10-year Treasury Inflation Protected Securities (TIPS). TIPS compensate investors for the loss of purchasing power due to inflation. The principal of TIPS increases at the rate of the annual Consumer Price Index, which effectively protects the principal from inflation to the extent measured by CPI.

TIPS holders also receive a small yield, if any. The spread between the 10-year TIPS yield and the 10-year Treasury yield reflects the bond market’s expectation of where inflation is headed over the next ten years.

The 10-year Treasury yield ended Friday at 2.66%. It has been in this neighborhood all week, the highest yield since April 2014 when the bond market was coming out of its “Taper Tantrum” that it had entered into when Chairman Bernanke suggested the unthinkable, that the Fed might someday start tapering “QE Infinity.” 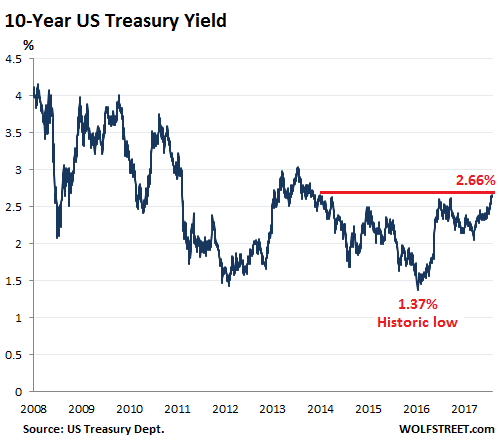 The spread between the 10-year Treasury yield (2.66%) and the 10-year TIPS yield (0.57%) widened on Friday to 2.09%, the highest since September 2014. This is what the Treasury market is now pricing in as its expectations for inflation over the next 10 years: 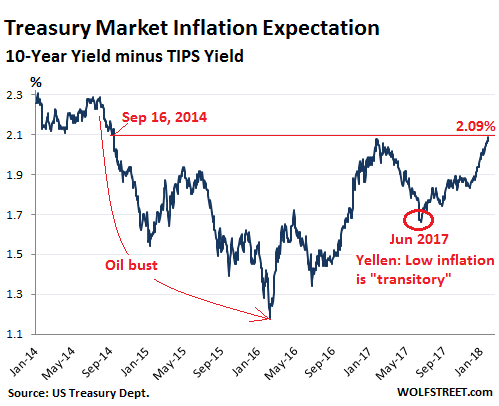 In the chart, note the inflation dynamics. The oil bust started in mid-2014, and the broader commodities bust was going on at the same time. This filtered into all kinds of prices – not just fuel. At the same time, transportation costs collapsed during the “transportation recession” of 2015 and 2016 not only for freight within the US but also for containerized freight across the oceans.  And there were other elements that pressured inflation lower.

But then oil prices began to rise and transportation began to recover and other prices moved higher, and inflation expectations surged. The dip last summer that Fed Chair Yellen called “transitory” was in fact transitory. And the bond market is now getting ready for more and is beginning to price this in.

This is one more piece in the puzzle to indicate that the Fed, which watches inflation expectations closely and mentions them specifically, is going to move forward on its path to higher rates.

The economy currently is going through a “spurt,” but nine years of scorched-earth monetary policies are coming home to roost. Read…  Why the Next Downturn “Will Not Look Like 2008”