A crackdown on excessive debt. Financial engineering gets more expensive.

The new tax law is larded with goodies for Corporate America, but there is one shift – a much needed shift – in this debt-obsessed world that will punish over-indebted companies, discourage companies from taking on too much leverage, and perhaps, just maybe, make these companies less risky: The new law sharply limits the deductibility of corporate interest expense.

Starting in 2018, a company can only deduct interest expense of up to 30% of its Ebitda (earnings before interest, taxes, depreciation, and amortization). Any amount in interest expense beyond it will no longer be deductible.

This will tighten further in 2022, when the deductibility of corporate debt will be capped at 30% of earnings before interest and taxes but after depreciation and amortization expenses. This is a much smaller number than Ebitda. And interest expense deduction is capped at 30% of that much smaller amount. This will raise the tax bill further.

Most impacted will be highly indebted companies, which often have a junk credit rating. And due to this junk credit rating, they also pay higher interest rates. This made the interest expense deduction very valuable. But now it is getting partially gutted.

Businesses have long been incentivized to borrow, not only by the extraordinarily low interest rates even for junk-rated companies, but also by the full deductibility of interest expense. And thus encouraged by the tax code, corporate debt has surged. Mergers & acquisitions, share buybacks, leveraged buyouts, and dividends have often been funded at least partially with debt. And over the years, companies have piled on an enormous amount of debt.

This chart shows this surge in US debts (bonds and loans) of nonfinancial businesses over the past decade: 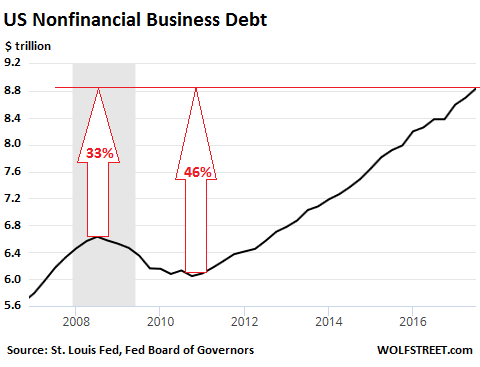 According to estimates by the Congressional Joint Committee on Taxation, cited by The Wall Street Journal, the first phase of curtailing interest-expense deductibility – the phase that kicks in next year – would raise $171 billion in tax revenues over 10 years. The second phase that commences in 2022 would raise $307 billion over 10 years.

This would be the billions of dollars that highly indebted companies would pay more in taxes because they’re losing the deductible of some of their interest expenses. It will be a significant hit to their after-tax income. It won’t kill them, but it will lower the incentive to borrow.

It only impacts companies with a taxable profit and won’t hit companies that are already money-losing shipwrecks because they have no income and pay no income taxes. And for companies with less leverage, the benefits enshrined in the new tax law far outweigh the additional tax expenses associated with the new limits on deductibility of interest expense.

But it will hit companies that are loaded up with debt. These are already precarious constructs, and any major additional expense makes them even more precarious.

Private equity firms have long specialized in leveraged buyouts (LBOs) where they buy a company mostly with funds that the acquired company has to borrow and carry. If all goes well, the PE firms are able to unload the company via an IPO, but much of the debt from the LBO remains.

For example, First Data Corp. It was acquired during the LBO boom in 2007 for $29 billion by KKR. In October 2015, KKR started unloading it via an IPO. As of its third-quarter filings, First Data still has $18.5 billion in debt, which is junk-rated and generated $964 million in interest expense over the past four quarters.

“We will need time to fully understand all aspects of the bill and its impacts on our financials,” a First Data spokeswoman told The Journal. Some highly leveraged companies have already warned about this in their earnings calls, many others will.

The most leveraged, M&A-prone, and LBO-infested sectors would feel this the most, including technology and healthcare. But all profitable companies with significant debt levels will feel it.

These two provisions – the limits on deductibility of interest expense and the lower tax rate – remove much of the tax incentives to borrow.

While companies will — and should — continue to borrow for revenue-generating purposes, and while they’ll love the new 21% tax rate, the hit to earnings from debt will be larger. This changes the equation for debt-funded financial engineering, such as share buybacks and acquisitions.

To boost their net income, companies might curtail their borrowing binge for these unproductive purposes, and some companies might even try to deleverage in order to cut costs. Edging away, if ever so slightly, from debt-funded financial engineering projects would be a good thing for Corporate America and the economy overall, though it might be a mixed blessing for the short-termism and financial gamesmanship of Wall Street.

This adds to the context of the new tax law as a measure that attempts to pull the private sector away from the debt precipice by removing some of the incentives to borrow. This includes households. Under the new tax law, they’re losing some of the incentives to binge on debt-funded home purchases. And the magnitude of this change has not been fully appreciated just yet. Read… What Will the Tax Bill Do to the Housing Market?

49 comments for “What Will the Tax Law Do to Over-Indebted Corporate America?”