US producers simply don’t play along with OPEC and Russia.

WTI really does look like it is about to collapse. Let’s be clear, I am not necessarily talking about a return to the sub-$30 of the beginning of 2016 here, but a return to the more recent lows around $42 before too long is distinctly possible, and if that happens, who knows where we go from there? There are, as I have noted in the past, reasons to believe that the long-term path of oil is still upward, but more immediately there is one dominant factor that keeps adding downward pressure, large and still growing supply from North American shale producers.

Some say, as in this FT piece, that there are signs that U.S. shale production has peaked, but then that was also supposed to be the case in 2015 and 2016. I am sure that if I could bother to go back further I would find that the same thing was said in previous years too. The fact is though, that as the EIA chart below shows, after dropping off as price declined at earlier this year, U.S. crude production is growing again and will be higher this year than last and is expected to be higher again in 2018. 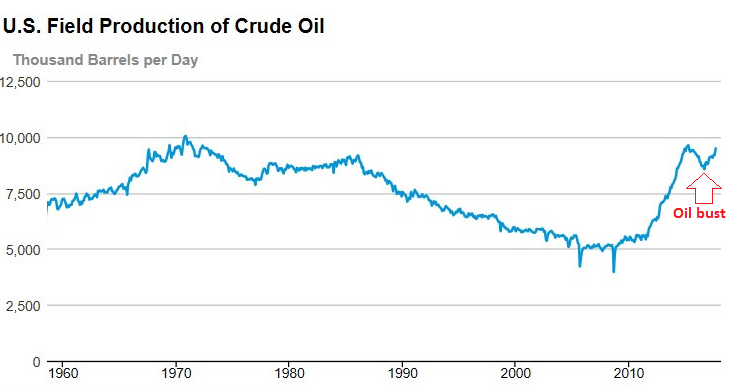 The chart below indicates why American producers are pumping at a growing rate. WTI has been recovering ever since the low of $26.05, and is now at levels not seen since June of 2015.

There are reasons for that recovery, most notably the production cuts agreed by OPEC countries and others including Russia and improving global growth, but those bullish factors are now fully priced in and the effect of that is to encourage U.S. E&P companies to, to borrow a phrase, drill, baby, drill! 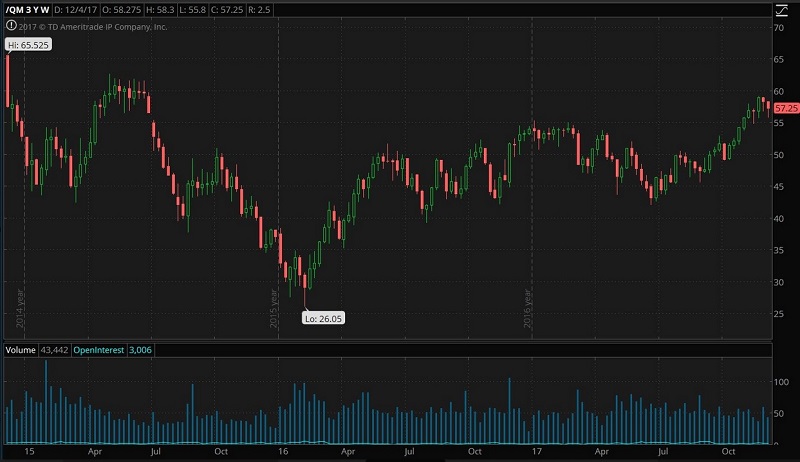 I have been waiting for the expansion in North American production to slow and for demand growth to dominate pricing, but it hasn’t happened. It seems there are only two thing that will potentially bring that about… a lack of available drill sites, or a big drop in price. Anybody who has witnessed the actions to date of the current U.S. Presidential Administration and Congress will know that the first is not about to happen soon, which leaves us with the second.

When OPEC and other signatories to the deal got together recently in Vienna they announced that there was almost total adherence to the scheduled cuts. That was greeted by most people, including, I will freely admit me, as a positive for oil prices. It is certainly rare based on the results of other agreements to cut and therefore impressive, but there is a basic problem. Now that the appropriate level of cuts has been achieved, production in the participating countries will at best remain at current levels. U.S. production, however, continues to increase exponentially.

There are, as I said, some bullish factors, and there is always the chance of a major unforeseen event disrupting supply; but all else being equal, the next big move in oil will be caused by the most basic driver of price for any commodity; the balance between supply and demand. As it stands, every increase in demand and attempts at reduction in supply outside the U.S. is being more than compensated for by increases in domestic production, and eventually the price must reflect that, despite a continued positive outlook for economic growth.

That is especially true if further cracks start to appear in the production cuts agreement. Russia already rumbled some dissatisfaction at the last meeting of the parties to the cuts, and if crude prices simply stall for a while and U.S. exports continue to increase it is unlikely that the Russians will continue with a policy whose net effect is to enrich U.S. oil companies.

There is, then, a chance of an event that would cause a collapse in oil prices, but that may not even be needed. The simple mechanics of pricing, supply, and demand need only to do their thing and the result will be a drop in oil prices that justifies the use of words like “collapse.” By Martin Tiller, Oil & Energy Insider

Blaming “a significant decline in orders,” GE Power started implementing layoffs in two locations in the US. Read… US Demand for Electricity Falls Further: What Does it Mean?

55 comments for “Is Oil About to Collapse?”