Layoffs at GE Power, for example.

First, there was Greenville County, South Carolina, where GE Power is one of the largest employers with 3,400 workers.

“Based on the current challenges in the power industry and a significant decline in orders, GE Power continues to transform our new, combined business to better meet the needs of our customers,” GE’s statement said in flawless corporate speak: “As we have said, we are working to reduce costs and simplify our structure to better align our product solutions, and these steps will include layoffs.”

GE Power has not disclosed the number of workers that are part of this layoff. The facilities make large gas turbines and turbine generator sets used by power plants. The plant also makes wind turbines.

Then there was GE Power’s facility in Schenectady, New York, which announced the layoff of an undisclosed number of employees, blaming “a significant decline in orders.”

GE Power has a problem: Electricity consumption in the US peaked in 2007 and has declined since, despite population growth of about 24 million people over the 10 years and despite economic growth.

The chart below, based on data from the Department of Energy’s EIA, shows annual electricity generation from 2001 through 2016. Note the growth in generation through 2007, the plunge during the Financial Crisis, the recovery, and the uneven decline since: 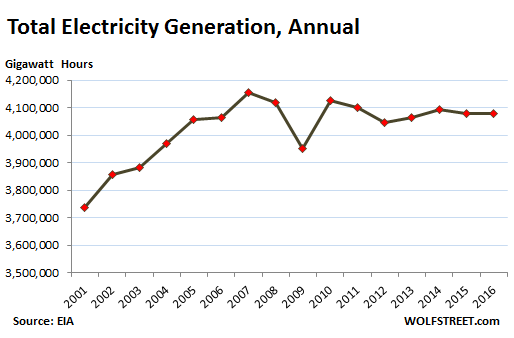 This trend continues in 2017. On Friday, the EIA released its Electric Power Monthly, with power generation data through September 2017. Over these nine months, electricity generation has fallen by 2.6% compared to the same period a year ago. Part of the year-over-year drop in August and September was due to the damaged electric grid in the areas affected by Hurricanes Harvey and Irma. 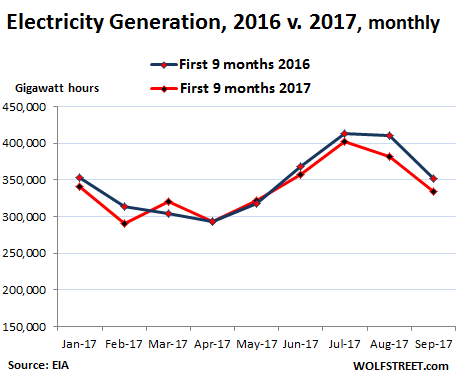 There are a number of reasons for the decline in demand for electricity, including more efficient heating and air conditioning systems, more efficient residential and commercial buildings, the switch to more efficient lights such as LEDs, the offshoring of power-intensive industries that started decades ago, the rise of rooftop solar, etc.

So the pie is shrinking for utilities. There is now no longer any doubt. But there is another interesting aspect to this phenomenon: How that shrinking pie is getting divvied up among the various sectors of electricity generation.

The most glaring aspect is the battle between natural gas and coal. And coal has been losing this battle for a decade for two reasons:

One, technical innovation. The Combined-Cycle Gas Turbine (CCGT) arrived in the 1990s. GE Power – yes, the one mentioned above – has been on the forefront with this technology. The gas turbine operates like a jet engine but drives a generator instead of fan blades. The hot exhaust gases then create high-pressure steam to drive a steam turbine connected to another generator. Thermal efficiencies reach 62% and beyond. Coal-fired power plants only use steam turbines, and thermal efficiencies average 33% globally.

Two, fracking. Starting in 2009, the surge in natural gas production from fracking created what people have called a “glut” in the US. The price collapsed to ludicrously low levels and has remained low, sending some natural gas drillers into bankruptcy.

Over the years, that combination — a highly efficient generating technology and the ludicrously low price of natural gas — has dethroned “King Coal,” cutting its share of power generation from 53% in 2000 to 30% in 2016, and sent a number of coal miners into bankruptcy.

The other winners beyond natural gas are wind and utility-scale solar. In 2000, they generated a minuscule amount of electricity. By 2016, they produced 6.5% more power than hydro.

This chart shows the major sectors of the power-generation portfolio of the US in gigawatt hours generated annually: note the dynamic between coal (black line) and natural gas (red line). While nuclear (yellow line) and hydro (blue line) have remained relatively stable, wind and solar combined (green line) have surged: 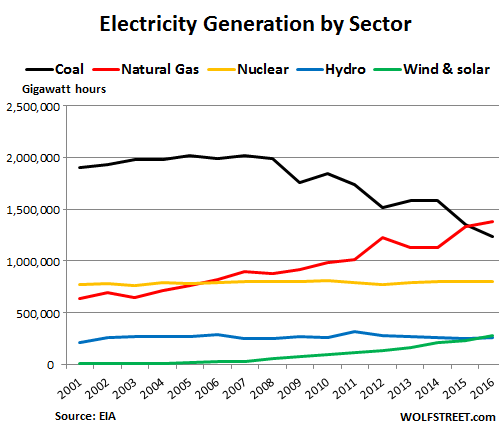 Regardless of how the pie is getting divvied up, the utilities have a problem: They’re operating in an industry with long-term declining demand. And these are the good times. In the second and third quarter, the economy grew by 3.0% and 3.3% annualized. Yet power generation fell in both quarters. And the utilities know what happens to demand for electricity when the business cycle turns.

This explains why utilities are so gung-ho about electric vehicles. They represent potential new demand for electricity that could pull power generators out of their quagmire. If utilities see that demand might be increasing enough to justify adding significant generating capacity to their systems, it could even spur new orders for GE Power and other equipment manufacturers. But getting to that level of critical mass in EVs is years down the road. For now, the quagmire of declining electricity demand remains.

While overall EV sales in the US are rising, Tesla’s sales fell in November amid a slew of problems. Read…. This is where Hype Goes to Die. Carmageddon for Tesla

159 comments for “US Demand for Electricity Falls Further: What Does it Mean?”