But after the last two times, there was a “financial event.”

There has been a lot of hand-wringing about junk bonds this week, that they have gotten clobbered, that losses have been taken, that this is a predictor of where stocks are headed, etc., etc., because after a steamy rally in junk-bond prices from the February 2016 low, there has now been a sell-off.

When bond prices fall, bond yields rise by definition. And the average yield of BB-rated junk bonds – the upper end of the junk-bond spectrum – did this: 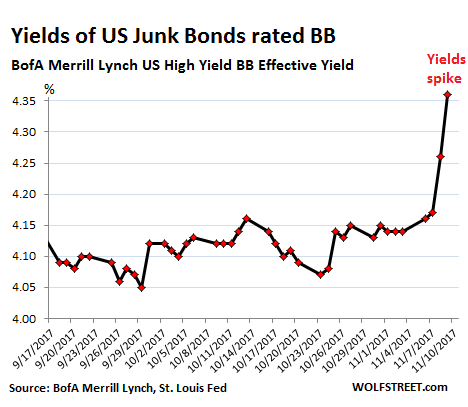 No one likes to lose money, and junk bonds did lose money this week, an astounding event, after all the easy money that had been made since early February 2016. But how far have yields really spiked?

The chart below shows the same BofA Merrill Lynch US High Yield BB Effective Yield index, but it puts that “spike” into a three-year context: 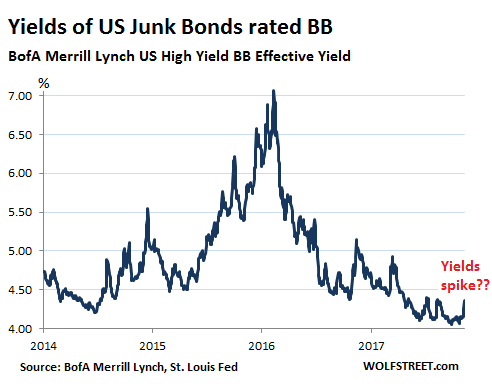 For further context, the BB yield spiked – a true spike – to over 16% during the Financial Crisis, as bond prices crashed and as credit froze up. Currently, at 4.36%, the average BB yield is off record lows, but it’s still low, and junk bond prices are still enormously inflated, given the inherent credit risks, and have a lot further to fall before any hand-wringing is appropriate.

The low BB yield means that risky companies with a junk credit rating can still borrow money at near record low costs in a world awash in global liquidity that is trying to find a place to go. This shows that “financial conditions” are very easy.

The market has now four Fed rate hikes under its belt and the QE unwind has commenced. Another rake hike is likely in December. Tightening is under way. By “tightening” its monetary policy, the Fed attempts to tighten financial conditions in the markets. That’s its goal.

But that hasn’t happened yet. While short-term yields have responded to the rate hikes, longer-term yields are now lower than they’d been at the time of the rate hike in December 2016. Stocks have rocketed higher. Volatility indices are near record lows. And various yield spreads have narrowed sharply – for example, the difference between the 10-year Treasury yield and the 2-year Treasury yield is currently just 0.73 percentage points. In other words, raising money is easy and cheap.

And “financial stress” in the markets, as measured by the St. Louis Fed’s Financial Stress Index, has just hit a record low. 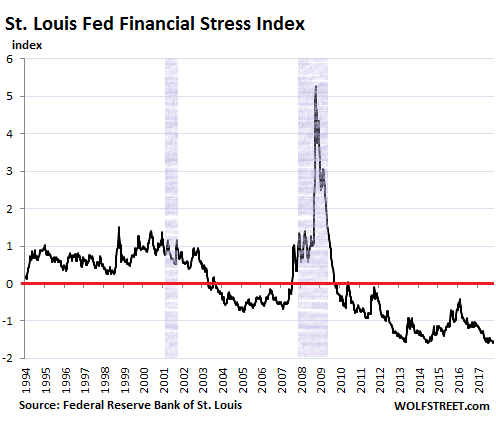 In other words, financial conditions have never been easier despite the current series of rate hikes, the Fed’s “balance-sheet normalization, and the hand-wringing about junk bonds this week.

The chart below shows the Financial Stress Index going back to 2014. In that time frame, all values are below zero. Financial stress in the markets was heading back to normal in late 2015 and early 2016, as a small sector of the total markets – energy junk-bonds – were getting crushed and as the S&P 500 index experienced a downdraft. But in early February 2016, everything turned around: 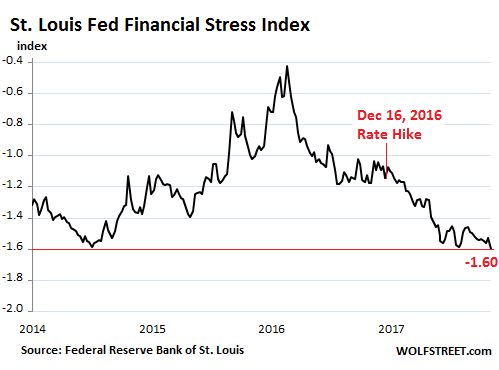 While the index is not a predictor of anything, it is an excellent thermometer of financial conditions in the markets overall as each of the 18 components “captures some aspect of financial stress,” the St. Louis Fed explains. These are the components:

So markets, as tracked by these 18 indices, have blown off the Fed’s tightening measures. But that too is normal. There is usually a fairly long lag between when the Fed begins tightening and when markets react.

It happened the last two times.

The Fed started hiking rates in January 2004, from 1% to 5.25% by July 2006. Throughout, stocks surged and the housing market ballooned. It took nearly four years before this tightening phase too became a financial event.

Eventually markets react. But not yet. Not today.

New York Fed President Dudley is quitting. If Yellen decides to leave in February, there will be five vacancies to fill on the policy-setting FOMC. Read… The New Fed Could Be Off the Charts

54 comments for “Financial Markets Are Still Blowing Off the Fed”