Other sectors are weak too, but one sector is hot.

Commercial real estate prices soared relentlessly for years after the Financial Crisis, to such a degree that the Fed has been publicly fretting about them. Why? Because US financial institutions hold nearly $4 trillion of commercial real estate loans. But the boom in most CRE sectors is over.

The Green Street Property Price Index – which measures values across five major property sectors – had soared 107% from May 2009 to the plateau that began late last year, and 27% from the peak of the totally crazy prior bubble that ended with such spectacular fireworks. But it has now turned around, dragged down by a plunge in prices for retail space.

The CPPI by Green Street Advisors dropped 1.1% in October from September. In terms of points, the 1.4-point decline was the largest monthly decline since March 2009. The index is now below where it had been in June 2016: 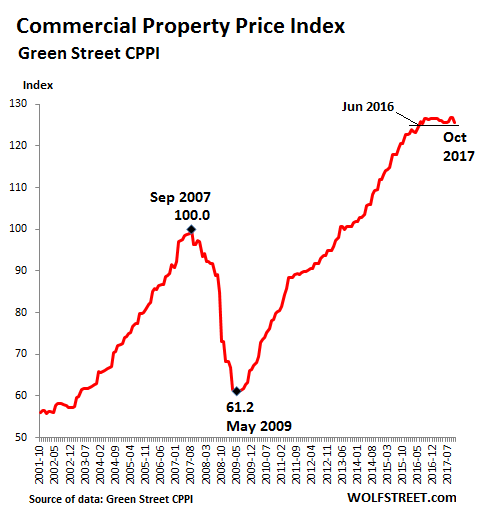 This phenomenal bubble, as depicted by the chart above, has even worried the Fed because US financial institutions hold nearly $4 trillion of CRE loans, according to Boston Fed governor Eric Rosengren earlier this year. Of them, $1.2 trillion are held by smaller banks (less than $50 billion in assets). These smaller banks tends to have a loan book that is heavily concentrated on CRE loans, and these banks are less able to withstand shocks to collateral values.

Rosengren found that among the root causes of the Financial Crisis “was a significant decline in collateral values of residential and commercial real estate.”

But the CRE bubble isn’t unraveling as gently as the chart suggests. Some sectors are still surging, while others are plunging. According to the report, the index, which captures the prices at which CRE transactions are currently being negotiated and contracted, “was pushed down by falling mall valuations.”

Which sector is plunging, and which is soaring?

Brick-and-mortar retail space is getting crushed. The index for strip retail fell 5% year-over-year. And the index for mall prices plunged 6% in just the month of October from September – a huge move in one month – and are down 11% from a year ago.

The self-storage sector, formerly the hottest sector of them all, having surged 180% since the trough of the Financial Crisis, has turned cold, and prices are down 3% year-over year.

Lodging took a 12% plunge that started in 2015, and it never recovered. It has remained essentially flat since, currently with a 1% gain over the beaten-down levels last year. Lodging has been under attack from a structural shift to home-sharing rentals, such as Airbnb, and even at its peak in 2015, the index barely hit its peak before the Financial Crisis, before dropping again. It is now down about 10% from its 2007 peak.

The industrial sector is hot. The index jumped 10% year-over-year in October. Industrial includes warehouse space for “fulfillment centers,” as Amazon calls them. They are in hot demand, not only from Amazon, which has been leasing them around the country, but also from other logistics and retail companies involved in the online retail boom.

The apartment sector is still hanging on by its fingernails, with prices up a measly 1% from a year ago, but down from their peak.

The office sector index rose 3% year-over-year. While price growth has slowed, there has been no significant decline in recent months.

Healthcare is still rising, up 4% year-over-year, as the industry takes up an ever larger slice of the US economy.

The CPPI is based on estimates of private-market value for REIT portfolios across the five major property sectors with an aggregate asset value of $600 billion, according to Green Street Advisors. Since REITs own high-quality properties, the index measures the value of institutional-quality commercial real estate.

Investors tend to jump on the next hot trend, and years ago, they jumped on retail malls in the hope that the American consumer couldn’t ever be crushed. That is likely true. But that consumer has changed buying habits, and malls are being left out. Maybe these folks should have bought gold coins instead. At least they’d have something that doesn’t have to be razed, which is the fate many malls are facing.

CRE is clearly showing the side effects of the structural switch to online retailing. For retailers with a large brick-and-mortar presence that are trying to restructure their operations and finances to survive in this era, or for their landlords such as REITs, this structural change will drag out for years and will be painful. But for some, this (creative) destruction in the brick-and-mortar meltdown is already painful. Read…  Malls and their Hapless Investors Keep Getting Crushed