This confirms what many Americans feel in their wallets.

In the data today on personal income and outlays for September was a hefty shot of reality that many Americans have been feeling in their wallets on a daily basis: On a personal level, per individual, or “per capita,” the disposable income adjusted for inflation looks lousy. In fact, it declined in September and has been declining since May.

At first glance, as per headlines, the data looked pretty good. For example:

But it’s not the drop in savings that’s the problem; it’s the drop in disposable income per capita.

First consumer spending, because that’s what grabbed the headlines. Personal Consumption Expenditures rose 2.7% from a year ago, adjusted for inflation, according to the Bureau of Economic Analysis. That’s smack dab in the middle of the range since 2010, whose low point was +1% (October 2012 and April 2013) and whose peak was +4.2% in January 2015.

Consumer spending was what the media focused on. But the report’s larger section on “real” disposable income wasn’t pretty: it rose only 1.2% compared to a year ago.

Disposable income is based on wages, receipts from assets such as interest and dividends, rents, farm income, and government benefits, such as Social Security, Medicare, VA benefits, etc. (government benefits account for about 17% of total income) minus “contributions for government social insurance,” and the like, and minus personal taxes.

So disposable income inched up 1.2% year-over-year. In other words, the total size of the pie grew 1.2%. But consumers don’t feel that. What they feel is their slice of the pie, but that pie got cut into more slices as the US population expanded. And this leaves disposable income “per capita,” which the BEA also discloses, but mercifully buried in the data.

This real disposable income per capita — a function of income, taxes, inflation, and population growth — peaked in May and has been declining ever since. In September it declined -0.1% from August. Compared to September a year ago, it’s up a tiny 0.56%. Over the past two years – since September 2015 – it has inched up a total of only 0.95%: 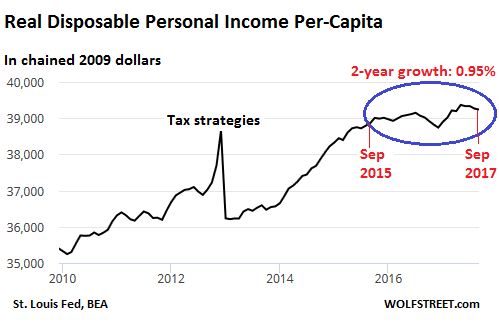 About that oscillation in 2012/2013: That 5% spike in the second half of 2012 and subsequent 6% plunge in January 2013 was the reaction to tax changes taking effect in 2013, causing a major calendar shift in tax strategies.

That measly 0.95% gain in per-capita disposable income over the past two years could actually still be too high, if the inflation rate with which this was adjusted underestimated actual inflation over those two years just a tiny bit. Many households swear their costs of living rose much faster. If actual costs of living rose .5 percentage points faster per year than the price index used in the income calculations, the real disposable income per capita would be on a downward trajectory.

That’s across the population. At the lower 60% of the income spectrum, the equation can look outright terrible. They’re dealing with soaring housing costs, healthcare costs, and educational costs that eat up the lion’s share of disposable income. Cost-of-living increases based on these three items, depending where the people live, can be far higher.

But this savings rate has a bit of irony: Depending on who does the counting, about 60% of the households in the US live from paycheck to paycheck and have essentially no money left to save, and they cannot save. Savings are concentrated at high income levels.

At the lower income levels, where there are essentially no savings, the more important figure is how deep these households are going into debt to make ends meet. The answer is this: Consumer credit has been jumping to new all-time highs and (not including mortgage debt) has reached $3.77 trillion. That’s up 5.5% year-over-year, a period when total disposable income has inched up only 1.2%.

The US economy, as measured by “real” GDP, grew by 2.3% from a year ago in the third quarter. But this was the “advance estimate” based on data that is “incomplete or subject to further revision.” These revisions can be big. Read…  How Much Illusion in GDP? What You See Is Not What You Get