The UK is not the only one. But it’s furthest ahead. In the US, consumer prices as measured by the Consumer Price Index rose 2.2% in September compared to a year ago. In the Eurozone, prices rose 1.5%. And today the UK’s Office for National Statistics reported that consumer prices in the UK jumped 3.0%, after having already risen 2.9% in August. It was the biggest increase since April 2012.

And inflation is outpacing wage increases, which inched up a meager 2.1%, slamming consumers further, and hampering the UK economy that is already showing signs of strain, with, for example, new vehicles sales plunging over 9% in September from a year ago.

Inflation has now been above the Bank of England’s target of 2.0% for the eighth month in a row: 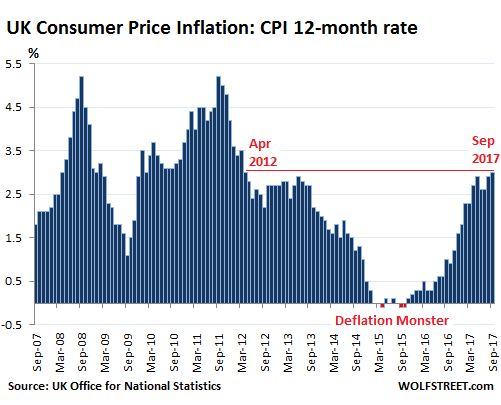 Note the dreadful “Deflation Monster” that economists and the media spent so much energy scaremongering about, though a little price deflation would be a godsend for consumers – and the consumer-driven aspects of the economy.

A broader measure of the CPI, which includes “owner occupiers’ housing costs” (CPIH), rose 2.8%; it was also the highest since April 2012.

The CPIH is the most comprehensive measure of inflation. It extends the CPI to include a measure of the costs associated with owning, maintaining and living in one’s own home, known as owner occupiers’ housing costs (OOH), along with Council Tax. Both of these are significant expenses for many households and are not included in the CPI.

The report by the ONS also pointed out that the culprit wasn’t just energy or the depreciation of the UK pound:

The inflation rate for a range of goods has, however, picked up since the start of the year and the overall rate in the UK is higher than in most other EU countries, including all of the larger western European nations. Depreciation may have influenced this but increasing global commodity prices could also be a factor.

This chart by the ONS shows how broad the price increases have been. The yellow bars indicate the upward contribution of each category to the overall inflation figure in September 2017: 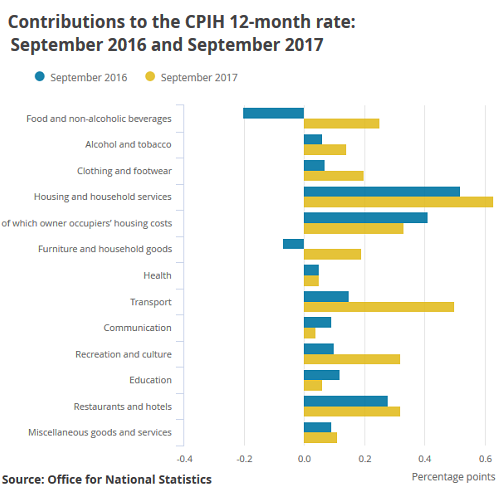 When inflation hits 3.1%, the Bank of England is required to write a letter to the Chancellor of the Exchequer to publicly explain why CPI is overshooting the central bank’s 2% inflation target.

BOE Governor Mark Carney told lawmakers on Tuesday that he expects inflation to rise further in October, adding that “it’s more likely than not” that he’ll need to write that letter to the chancellor.

This inflation data was the last reading before the BOE’s next meeting in early November. A veritable cacophony has been emanating from the BOE about what to do next. As the debate rages, more and more indication are lining up that the BOE will raise rates in November by a quarter point to 0.5%. It would be the first rate hike in a decade.

Inflation isn’t necessarily caused by growth or strong internal demand or rising wages, none of which is happening in the UK. Average weekly earnings inched up only 2.1% year-over-year during the three months to the end of July. Falling “real” incomes (adjusted for inflation) have been straining consumers.

That consumers are cutting back is showing in numerous ways – many of them all too conveniently blamed on the uncertainties of the not very smooth Brexit negotiations. For example, new vehicle sales (as determined by registrations) plunged 9.3% in September year-over-year, the sixth decline in a row.

So the BOE is facing surging inflation in a slowing economy with sagging consumer spending due to inflation eating into purchasing power. This is not a nice scenario.

But it if doesn’t get inflation under control, the BOE will face even worse economic conditions and consumers will be crushed.

Inflation is also rising elsewhere, and the Fed has been – albeit timidly – on the forefront with its tightening policies. The Fed has hiked its target range for the federal funds rate four times and is now engaged in unwinding QE and shedding assets from its balance sheet. Another rate hike is likely in December.

The ECB is unlikely to raise rates for now, but it has already tapered its QE program by €20 billion a month earlier this year and will likely announce more QE-tapering at its next meeting on October 26. It too follows the Fed’s path, but years behind: first QE tapering, then rate hikes.

When the US Consumer Price Index jumped 2.2% in September, all fingers pointed at energy costs, particularly gasoline. But there’s something boiling beneath the surface, and it has nothing to do with energy. Read… Yellen Was Right: “Transitory” Factors of “Low” Inflation Are Reversing, with Much More to Come

45 comments for “Wheezing Consumers & Slowing Economy, No Problem: UK Inflation Jumps Most in 5+ Years. Rate Hike Due in November”