But the Swiss National Bank is just an innocent bystander.

The publicly traded shares of Swiss National Bank (SNBN) rose 5.7% on Thursday and closed at a new high of 4,449 Swiss francs. They have skyrocket 133% since July 19. And that’s just the last two months of an exponential spike. Who’re the lucky ones that own the shares of the SNB?

With only 100,000 shares being publicly traded on thin volume, it’s easy to drive up the price. Some well-placed hype and a modest amount of buying pressure can trigger big moves that then inspire other speculators to jump in and chase the small number of shares.

The article spread over the next three weeks. Other media outlets jumped on it. I mused about it on September 11. Today, it culminated with an article in the Wall Street Journal. And shares have skyrocketed another 1,620 francs since August 21, or 57% in one month.

But there is a problem with this run-up: It’s a pump-and-dump scheme perpetrated by market participants, not the SNB, which is just an innocent bystander.

This chart shows the daily moves since June: 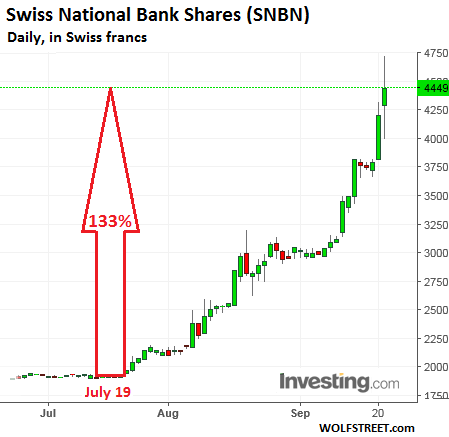 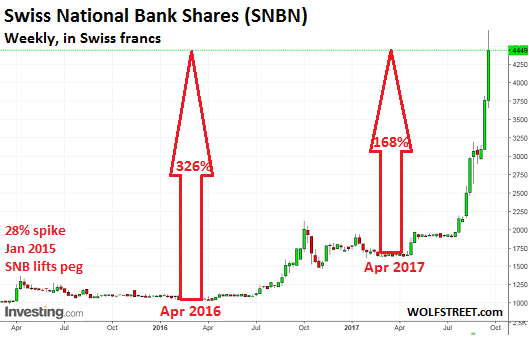 The hype is this: The SNB has become a hedge fund since it decided in January 2015 to print Swiss francs — for which there is huge global demand — and buy mostly bonds and stocks denominated in euros and dollars. The idea is to put a lid on the franc by selling it.

By the end of Q2, the SNB had amassed 714.3 billion francs ($748 billion) in foreign exchange assets. This included 2,558 US-traded stocks worth $84.3 billion, with large positions in the biggest most liquid companies, including the FAANGs (Facebook, Apple, Amazon, Netflix, and Alphabet’s Google).

But here’s the thing about central banks:

They can create money out of nothing to buy assets (QE). And many of them did, including the Fed, the ECB, the Bank of Japan, the Bank of England, and the SNB.

In turn, when they sell these assets or when they let bonds mature and “roll off” the balance sheet, as the Fed will start doing on October 1, the money from those sales or redemptions gets destroyed in the reverse manner in which it was created (I explained how this works in my article on the Fed’s QE unwind).

So what benefit do SNB shareholders get?

Private shareholders just get a dividend that has been limited since day one to 15 francs a share.

So public shareholders can get up to 2 billion francs in profit distribution a year, while the 100,000 shares in private hands have to make do with 15 francs a share, or a measly 1.5 million francs (million with an M). That’s all they’ll ever get. In other words, there is no benefit from those white-hot FAANG stocks to private shareholders, ever.

The only other major central bank that can print its own money and has publicly traded shares is the Bank of Japan. It has a far bigger balance sheet, chock-full with bonds and equities, and its shares have lost 35% over the past five years.

The SNB is neither a hedge fund nor a mutual fund. It’s a central bank that creates and destroys money and sets various policy interest rates. Nearly all of the profits are channeled to government entities. The Fed too pays most of its profits to the government: For the year 2016, the Fed’s transfer to the Treasury Department came to about $92 billion.

The hype out there about all these white-hot US stocks on the SNB’s balance sheet doesn’t include the second part of the equation: That private shareholders don’t get any of it. The only hope they have is to sell the shares to a greater fool, if there are any left, hopefully.

The exponential spike of the SNB’s shares shows just how far speculators will go to chase the last dollar, euro, or franc during these crazy days of central-bank interest-rate repression, dizzying asset price inflation, serial manias, and the false certainty that all this will go on forever.

But it may not go on forever. The Fed’s QE Unwind starts October 1. The next rate hike is likely in December. Low inflation, no problem. Read…  This Fed is on a Mission