What the heck is going on?

The central bank of Switzerland has become a huge hedge fund since it decided in January 2015 to print Swiss francs — for which there is huge global demand — and sell these freshly created francs to buy bonds and stocks that are denominated in euros and dollars. US stocks are a particular favorite. The Swiss National Bank (SNB) has thereby created a fantastical money-fabrication scheme. This scheme is publicly traded. And the shares have become a doozie.

Today, the shares (SNBN) closed at a new high of 3,126 Swiss francs, having soared 64% since July 19 in cryptocurrency-fashion. This chart shows the daily moves since May: 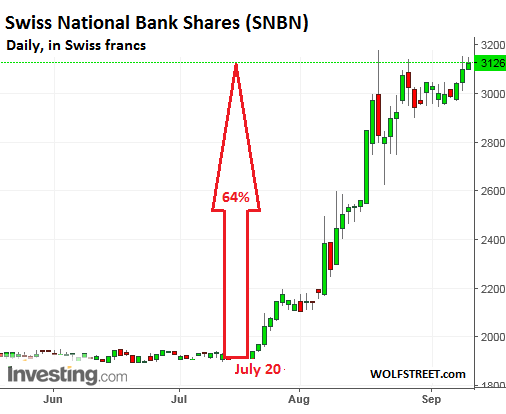 In January 2015, the SNB “shocked” the financial markets globally by scrapping its minimum exchange rate of CHF 1.20 to the euro and switched to a draconian negative-interest-rate policy and massive asset purchases — massive for a tiny country like Switzerland — to keep the value of the franc from rising against the euro.

This chart of weekly moves shows how the SNB’s shares spiked 28% during those heady days in January 2015, how things calmed down afterwards, relatively speaking, and how all heck broke loose in July 2016, with the shares soaring 200% in a little over a year, including 90% since April: 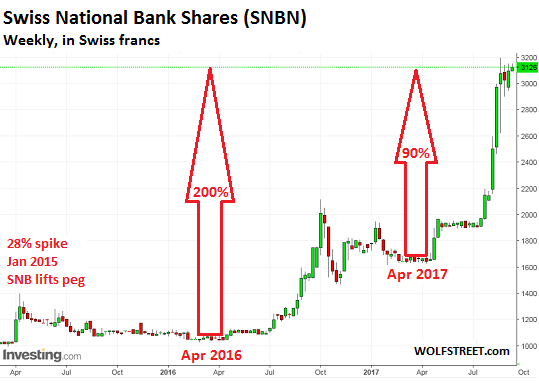 “The SNB share resembles long-term bonds rather than shares (as the dividend is limited to 6% of the share capital by law),” says the Swiss National Bank. But by the looks of things, they resemble the latest cryptocurrency.

As of the end of the second quarter, the SNB had 2,558 US stocks on its balance sheet, according to its 13F filing in August with the SEC, valued at the time at $84.3 billion, including 90 new positions since the first quarter, 1,433 increased positions, 253 decreased positions, and 36 position it sold entirely.

In total, at the time, the SNB had acquired 714.3 billion francs ($748 billion) in foreign exchange assets, including $84.3 billion in US-traded stocks, with large positions of the biggest most liquid stocks. Its top 10 positions totaled $14.7 billion, with the share count as reported for Q2 at today’s share prices: 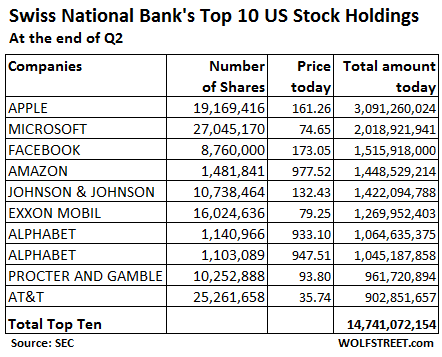 So who’re the lucky ones that own the shares of the SNB?

With only about 25% of the shares being publicly traded, there’s little liquidity. So if a hedge fund decided to drive up the price — given that the public owners that hold 75% will not sell — a relatively modest amount of buying pressure can trigger a noticeable move, and then other speculators get the drift and begin chasing after the same shares, and prices suddenly soar.

Here is the irony. The SNB creates its own money, and can do so in unlimited quantity. It then buys foreign stocks and bonds with those freshly created CHF, because it can. It can because there is heavy demand for CHF in the foreign exchange markets. Foreign investors take whatever the SNB prints. And this is the irony: the SNB is watering down its tiny currency more than any other central bank, and yet, foreign investors are falling all over each other to buy it.

So it’s operating a wondrous hedge fund, powered solely by the desire of foreign investors to own the ever more watered-down CHF. If these hedge-fund bets go south during a market downturn, the SNB can create more money to cover the hole. No big deal. It won’t go bust.

This works as long as there is global demand for CHF. If that demand dries up, and if these foreign investors realize that they’re holding heavily watered-down CHF and start unloading them, then the SNB might find that selling more newly created CHF into CHF weakness leads to a plunge in the currency’s value – because, why would anyone still want to own these watered-down CHF once they start plunging?

This would lead to a slew of other problems and issues with financial stability that the SNB might then have to address by unceremoniously dumping those stocks it has amassed. And as we have seen in January 2015, it’s not shy about shocking the financial markets.

Optimism among small investors in the US about stocks just hit the record set in January 2000, weeks before the dot.com crash commenced. Read…  Finally the Contrarian Warning from Small Investors