The other option: too ugly to even imagine.

“There is zero chance, no chance we won’t raise the debt ceiling,” swore Senate Majority Leader Mitch McConnell (R., Ky.) at an event in Louisville, Kentucky, on Monday.

Treasury Secretary Steven Mnuchin was there with him, pleading once again for a “clean” debt-ceiling increase, according to the Wall Street Journal. His “magic super Treasury powers” that allow the government to conserve cash to avoid having to issue more debt will expire at the end of September, he said.

“This is not about spending money,” he said. “This is about paying for what we’ve spent, and we cannot put the credit of the United States on the line.”

The debt ceiling is just under $20 trillion. While the government can issue bonds to redeem maturing bonds – and it does this all the time – it cannot allow the gross national debt to go beyond the debt ceiling.

But because it has to continue to pay for things that Congress mandated in its various spending bills over the years, the Treasury scrounges up the money from other government accounts, robbing Peter to pay Paul, so to speak. For example it temporarily short-changes the Civil Service Retirement and Disability Fund. These “extraordinary measures,” as they’re called, or the “magic super Treasury powers,” as Mnuchin called it, run out after a while.

Mnuchin said in his last letter to Congress that the out-of-money-date is September 29. But as in the past, the real out-of-money date can probably be stretched into October.

These shenanigans make the entire world shake its collective head and pray that Congress, after going through its charade, will for the umpteenth time raise the debt limit. The other option is a US default. Its global consequences are too ugly to even imagine.

But this charade has some peculiar effects, beyond its entertainment value: for months on end, it covers up the true extent of US government debt, and the current surge of this debt.

This chart shows the gross national debt going back to 2011, including the last two debt-ceiling fights. Note the long flat lines leading into October or November, followed each time by an enormous spike: 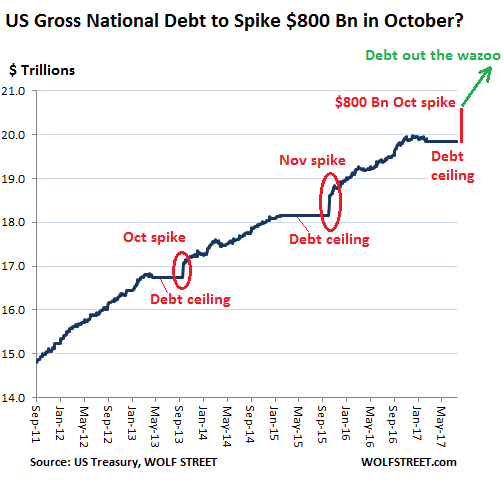 This year, the show is going to be even more magnificent. My guess is that the debt will spike $420 billion a business day or two after the debt ceiling is lifted and then continue to surge, and that it will jump by close to $800 billion in the 30 days following the debt-ceiling increase.

This will put the US gross national debt at around $20.6 trillion before the year is up. And there will be debt out the wazoo going forward.

If Congress doesn’t raise the debt limit to allow the Treasury to issue bonds to bring in this cash, the US will default on its debts and/or fail to make other payments that it is obligated to make. So, as one former Treasury official told the Washington Post in July, officials are now “brushing up on options in the ‘crazy drawer.’”

Lawmakers will return to Washington after Labor Day to tackle the debt ceiling. If there were a good chance they’d fail, I – who no longer shorts anything anymore – would short everything and curl up into a fetal position until the dust settles.

However, I’m confident that the drama queens, after going through maximum theatrics and bluster, will manage to raise the debt ceiling. They managed each time before. And they’ll manage this time too. They’re political animals, but they’re not stupid. I’m sure of that, knock on wood, fingers crossed.

So what happens when the Fed begins to unwind QE? The bank advisory panel told the Treasury Department that the accompanying decline in stocks and bonds will be “a financial engineering shock,” but it won’t be “systemic.” So just “let markets clear,” they said. Read…  Stock & Bond Markets in Denial about QE Unwind, but Banks, Treasury Dept. Get Antsy

111 comments for “US Gross National Debt to Spike by $800 Billion in October?”