Stock and bond markets are in denial about the effects of the Fed’s forthcoming QE unwind, whose kick-off is getting closer by the day, according to the minutes of the Fed’s July meeting.

“Several participants” were fretting how financial conditions had eased since the rate hikes began in earnest last December, instead of tightening. “Further increases in equity prices, together with continued low longer-term interest rates, had led to an easing of financial conditions,” they said. So something needs to be done about it.

And “several participants were prepared to announce a starting date for the program at the current meeting” – so the meeting in July – “most preferred to defer that decision until an upcoming meeting.” So the September meeting. And markets are now expecting the QE unwind to be announced in September.

Since then, short-term Treasury yields have remained relatively stable, reflecting the Fed’s current target range for the federal funds rate of 1% to 1.25%. But long-term rates, which the Fed intends to push up with the QE unwind, have come down further. As a consequence, the yield curve has flattened further, which is the opposite of what the Fed wants to accomplish.

The chart shows how the yield curve for current yields (red line) across the maturities has flattened against the yield curve on December 14 (blue line), when the Fed got serious about tightening: 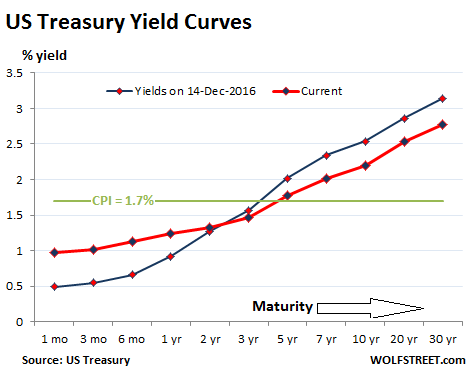 Yields of junk bonds at the riskiest end (rated CCC or below) surged in the second half of 2015 and in early 2016, peaking above 20% on average, as bond prices have plunged (they move in opposite directions) in part due to the collapse of energy junk bonds, which caused a phenomenal bout of Fed flip-flopping. But by rate-hike-day December 14, the average yield was 12%. And since the tightening moves and the planning for the QE unwind, the yield has dropped to 10.7% currently: 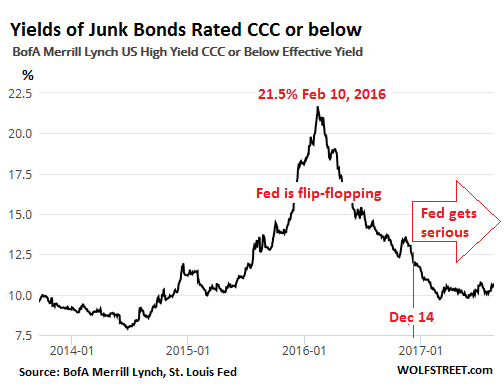 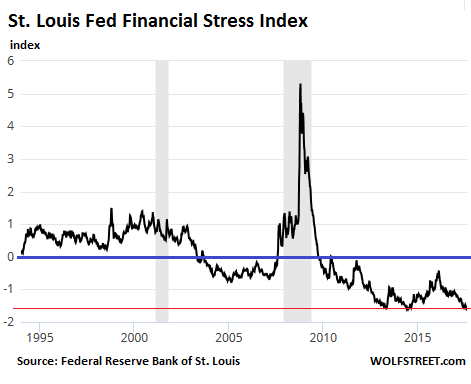 In other words, financial conditions have almost never been easier despite the current series of tightening moves. And this is what it looks like in more granular detail: 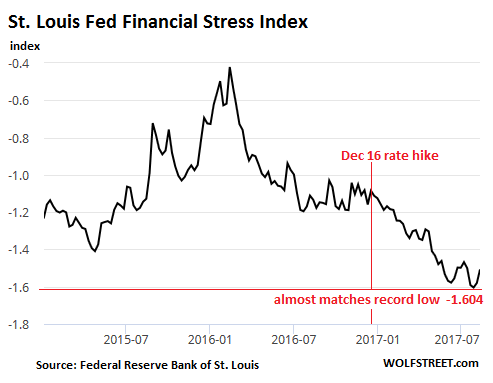 Stocks are still near all-time highs, though they’ve come down a tad. Interest rates for conforming 30-year mortgages are still quoted below 4%, thus propping up the housing market, despite the Fed’s plan to begin shedding its portfolio of mortgage-backed securities, which it acquired over the years specifically to push down mortgage rates.

After a 12-month phase-in period, the Fed will reduce its balance sheet by up to $50 billion a month in Treasuries and mortgage-backed securities, every month, with clock-work regularity. That’s the plan. By $600 billion a year or $1.2 trillion in two years. QE was designed to bring yields down and inflate asset prices. Now the opposite is being planned, and markets are just blowing it off.

No one knows how this will turn out. The Fed has never done a QE-unwind before. But folks are concerned. A committee of investors and banks – the Treasury Borrowing Advisory Committee or TBAC – pointed out some of those risks in its presentation to Treasury Department earlier this month.

They pointed out, for example, that the corporate and government borrowing costs are likely to rise. At the riskier end, borrowing costs could rise significantly. In addition, the federal government’s borrowing needs is also expected rise, Jason Cummins, TBAC chairman, wrote in the letter to Treasury Secretary Steven Mnuchin. So just when the Fed is cutting its balance sheet and the cost of borrowing rises, the amounts to be borrowed by the government are expected to increase.

“The private sector piggy-backed on the Fed’s large-scale asset purchases, a move that promoted a surge in corporate borrowing and tighter risk spreads,” Cummins wrote. “In an adverse scenario, there’s the possibility of a meaningful, but not systemically risky, decline in both credit and equities.”

It would be a “tail risk” the presentation said. It could entail accelerating “risk premium decompression,” where “small increases in yields can potentially lead to large changes in risk premium.” Which means large-scale declines in the prices of riskier bonds, and thus far higher borrowing costs for those issuers, and a big hit to stocks. The presentation:

Pro-cyclical behavior of investors who ‘piggy backed’ central bank purchases and ECB tapering are possible accelerators to the rise in US risk premium in a tail risk event.

“There may be a “meaningful decline in risk assets.” But it’s not going to be “systemic,” it said. “Banks and households have not leveraged to higher asset prices.” They can withstand the shock. So “Let markets clear.” It’s just “a financial engineering shock.”

Given how corporate bonds are now largely held by exchange-traded funds and mutual funds, this could get even more interesting. When bond prices decline, investors in those funds – painfully aware of the first-mover advantage experienced in prior bond-fund collapses – will be getting out of these funds, and funds have to sell bonds to meet the redemptions. At that point, bond market liquidity dries up, and this selling by funds will accelerate the pressures. And yet, bond and stock markets are still euphoric.

What happens to prices when the biggest, reckless buyer walks away? Read…  US Asset Bubbles Crack as Frantic China “Restricts” Outbound Investments

49 comments for “Stock & Bond Markets in Denial about QE Unwind, but Banks, Treasury Dept Get Antsy”