The most obviously lopsided deals.

The ECB’s efforts to buy corporate bonds as part of its stupendous asset buying binge has not only pushed a number of government bond yields below zero, where investors are guaranteed a loss if they hold the bond to maturity, but it has also done a number – perhaps even a bigger one – on the euro junk-bond market.

It has totally gone nuts. Or rather the humans and algorithms that make the buying decisions have gone nuts. The average junk bond yield has dropped to an all-time record low of 2.42%.

Let that sink in for a moment. This average is based on a basket of below investment-grade corporate bonds denominated in euros. Often enough, the issuers are junk-rated American companies with European subsidiaries – in which case these bonds are called “reverse Yankees.”

These bonds include the riskiest bonds out there. Plenty of them will default, and losses will be painful, and investors – these humans and algos – know this too. This is not a secret. That’s why these bonds are rated below investment grade. But these buyers don’t mind. They’re institutional investors managing other people’s money, and they don’t need to mind.

It’s perfectly good to invest in risky instruments as long as you’re being paid to take those risks or have a chance to make serious money. If you buy gold and silver bullion, you know you could make or lose a lot of money. But at a yield of 2.42%, these junk bonds will never make any money if you hold them to maturity, except for covering mild inflation. The risk of losses – including from default – are large. And investors are not getting paid to take those risks. It’s one of the most obviously lopsided deals out there.

The average yield of these junk bonds never dropped below 5% until October 2013. In the summer of 2012, during the dog days of the debt crisis when Draghi pronounced the magic words that he’d do “whatever it takes,” these bonds yielded about 9%, which might have been about right.

Since then, yields have plunged (data by BofA Merrill Lynch Euro High Yield Index Effective Yield via St. Louis Fed). The “on the Way to Zero” in the chart’s title is only partially tongue-in-cheek: 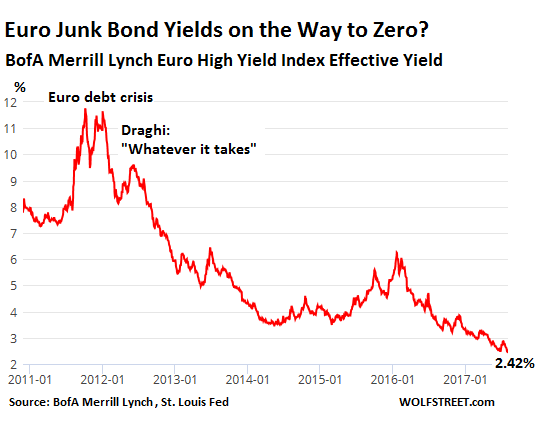 The chart below gives a little more perspective on this miracle of central-bank market manipulation, going back to 2006. It shows the spike in yield to 25% during the US-engineered Financial Crisis and the comparatively mild uptick in yield during the Eurozone-engineered debt crisis: 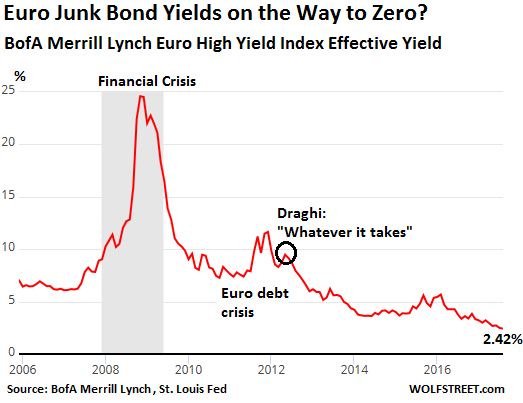 How does this fit into the overall scheme of things? For example, compared to the US Treasury yield? US Treasury securities are considered the most liquid and the most conservative investments. They’re considered as close to a risk-free financial instrument as you’re going to get on this earth. Turns out, from November 2016 until now, the 10-year US Treasury yield has ranged from 2.14% to 2.62%, comfortably straddling the current average euro junk bond yield of 2.42%

This chart shows the BofA Merrill Lynch Euro High Yield Index (red line) and the 10-year Treasury yield (black line). Note how they used to be worlds apart, and how the spread between them blows out when investors suddenly see risks again, with junk bond prices plunging and yield surging, while Treasuries barely quiver: 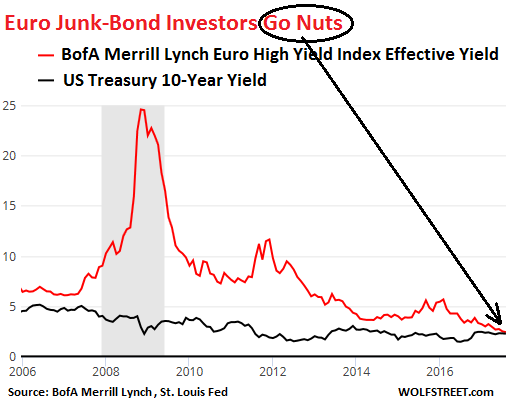 If you want to earn a yield of about 2.4%, which instrument would you rather have in your portfolio, given that both produce about the same yield, and given that one has a significant chance of defaulting and getting you stuck with a big loss, while the other is considered the safest most boring financial investment out there?

The answer would normally be totally obvious, but not in the Draghi’s nutty bailiwick. That this sort of relentless and blind chase for yield – however fun it may be today – will lead to hair-raising losses later is a given. And we already know who will take those losses: The clients of these institutional investors, the beneficiaries of pension funds and life insurance retirement programs, the hapless owners of bond funds, and the like.

In terms of the broader economy: When no one can price risk anymore, when there’s in fact no apparent difference anymore between euro junk bonds and US Treasuries, then all kinds of bad economic decisions are going to be made and capital is going to get misallocated, and it’s going to be Draghi’s royal mess.

In the US, “covenant-lite” loans – risky instruments issued by junk-rated borrowers, with few protections for creditors – set an all-time record at the end of the second quarter. Read…  Risk has been Abolished, According to Institutional Investors