Trying to figure out what’s going on with Argentina’s Central Bank’s monetary policy right now is about as exact a science as checking out the horses as they parade around the paddock before a big race. There are clear favorites, a few dark horses, and until someone crosses the finish line it’s all guesswork. Except a lot less enjoyable because horses are cooler than politicians.

Argentina’s currency market hiccuped last week at the prospect that former President Cristina Fernández de Kirchner has an actual shot at becoming a national Senator, representing the Buenos Aires Province. After hovering pretty close to AR $15 for the better part of the year, last week the US dollar exchange rate reached AR $18. 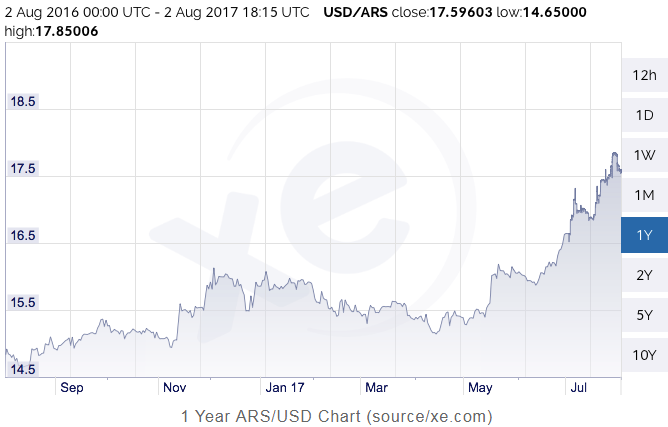 The Central Bank jumped into the market on Friday and sold US $305 million, pushing the rate back below the so-called “psychological barrier” of AR $18. But the “blue” or unofficial exchange rate is still hovering above this barrier, and it seems that political, financial, and economic commentators are all obliged to pile in with ominous commentary in an attempt to legitimize our existence as soothsaying, fortune-telling gypsies who can predict the future.

So without further ado, let’s take a look at what exactly is actually going on with Argentina’s exchange rate.

Game of Currency Regimes: The Central Bank and Monetary Policy

Argentina’s currency regime is what we call a “managed float”. All currencies live somewhere on a spectrum between a completely free market float on one extreme, and a fixed rate where a country gives up any national currency whatsoever. Countries outside the United States that use US dollars, like Ecuador, are to the far left of the chart below. Argentina is on the flexible end of things with a managed float.

If people want, or demand pesos, then they will become relatively more valuable vs. the dollar. This would happen if investment were flowing in and everyone thought Argentina was just the grandest, stablest, most attractive place to invest. Sadly for me, that’s not the Argentina in which I live.

Due to a number of factors completely outside the control of the Central Bank, people are not exactly queuing up for pesos. To grossly simplify the government’s relationship with the economy, see the chart below. When the fiscal side of the policy equation is out of sync and the government spends more than it brings in via taxes, something has to give. In Argentina’s case, the government is financing via raising debt overseas as well as letting this pressure leak over to the monetary side.

As Argentina’s Central Bank, the BCRA has certain tools at its disposal to effectively “manage” the peso’s float – but in in economics as in life, none of these tools are free.

Furthermore, the stronger and more sustained the pressure on the peso becomes, the less effective these tools end up being. So when former President Cristina Fernandez de Kirchner comes up ahead in the polls for a Senate seat, that ambiguous variable of dreaded political instability takes a front seat.

The return of Cristina makes a lot of people not want any pesos.

This blip in the political radar has basically thrown a wrench into the BCRA’s already fairly difficult task to make people want pesos, and not fear the imminent collapse of the economy.

While financial journalists try to sex up their writing material by referring to central bank operations as “firepower” or “ammunition”, trust me the actual sex appeal of selling dollars, buying bonds, and moving exchange rates is limited to a very small pool of weirdos who would make you feel uncomfortable in an elevator.

Besides selling US $305 million into the market, the BCRA also raised short term interest rates on short term treasury notes, principally the LEBACs (Letras del Banco Central), which are bonds with maturity between 30-273 days that are actively bought and sold in a secondary market.

By raising the interest rate on the LEBACs, the BCRA gives people and companies a higher return for taking the risk of holding peso-denominated instruments, while at the same time takes pesos out of the market. Win-Win, right?

Wrong. Raising short term interest for extended periods of time can damage the real economy, and rates can only go so high.

High short term interest rates also give capital market investors the incentive to engage in what’s called the financial bicicleta, or bicycle, between currency and short term bonds rather than spending or investing those funds in a longer term, actually productive investment.

Flipping cash from place to place to protect against currency movements does not create jobs or lead to economic growth.

Companies can combine LEBACs with dollar futures to create a situation that insulates them against peso risk.

The high interest rates keep people from fleeing the currency, but they also ensure that inflation remains high and that money loops around in an endless financial bicycle rather than fueling the real economy.

So what happens now?

It really depends on how people perceive Cristina’s return to politics, and how triumphant she is.

The currency market has pre-election jitters. These recent fluctuations are not likely symptoms of larger, non sustainable macroeconomic problems.

Whether or not the BCRA is independent from the government doesn’t really matter, because its ability to intervene in the currency markets only exists if the government retains credibility.

Cristina’s return to the political sphere in any form does not exactly scream credibility. Macri’s brand of economic reform has been truly painful to bear, and it’s understandable that his government should face opposition from candidates that address these issues.

But reasonable people, and it appears currency markets too, should conclude that Cristina Fernández de Kirchner should not be that candidate due to her incredible track record of (allegedly) shamelessly stealing money and shouting down anyone who disagrees with her.

For now, stability seems to have returned. People have faith that the BCRA has the willingness and ability to intervene as necessary to keep the peso around the AR $18 mark.

But history shows us that governments lose their credibility towards the end of an administration, not at the beginning. In three of Argentina’s most spectacular currency crises since 1981, the Central Bank intervened hand over fist but it wasn’t enough to stop a cycle of loss of credibility. The closer Macri gets to the end of his term, the less credible he becomes.

Logic dictates that even though Cristina leads in the PASO primary election polls, she would still lose in the final elections because the votes from one of her competitors would surely go to Macri’s Cambiemos candidate.

But Argentina is neither a country nor a culture that’s very logical at all. In fact, I have found great peace and tranquility in my life here since I stopped trying to use logic to explain this place. A Shakespearian willing suspension of disbelief combined with hope in a deux ex machina has been much more mentally productive.

Just two years ago, logic told us Macri didn’t stand a chance at being president.

So rather than try to figure out what will happen, I recommend you pull up a seat and enjoy the races. Placing a bet on either side is a gamble. By Bianca Fernet, Argentina.

15 comments for “Gambling on Argentine Politics: US Dollar vs. Short-Term Debt”