An ugly red flag for all of California goes up.

The California Employment Development Department also reported on Friday that year-over-year, the labor force still rose by 52,600 and employment by 198,000. That looks like a lot, but it was the smallest increase for any year-over-year period since August 2011.

This is an early red flag. But it still looks pretty good compared to what is transpiring in the San Francisco Bay Area. By some measures, there are nine counties in the Bay Area. We’ll look at the six counties that are part of the tech-jobs machine of San Francisco and Silicon Valley.

In San Francisco, nonfarm employment dropped to 542,100 jobs in June. This is the number of people working in San Francisco regardless of where they live, including the many who commute from other areas. This was down 5,100 from the employment peak in December and the lowest since June 2016.

The labor force, the number of people who live in San Francisco and are deemed to be in the labor force, was 559,800, up just 1,800 year-over-year. The chart below shows how the stunning employment boom that created 131,000 jobs from the beginning of 2010 through the end of 2016 has come to a screeching halt: 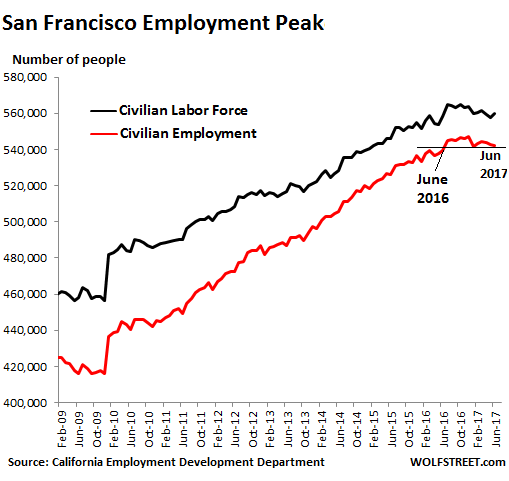 Over the seven years of that boom, employment increased by 31.6%! Employers in the city created on average 18,800 jobs per year!

But the for the 12-month period through June, employers created only 3,400 jobs, the slowest 12-month gain since April 2011. The chart below shows the rolling 12-month employment gains (blue) and losses (red) since January 2009. Note the trend from the job-creation peak in the fall of 2014 (for better visibility, I marked June in brown): 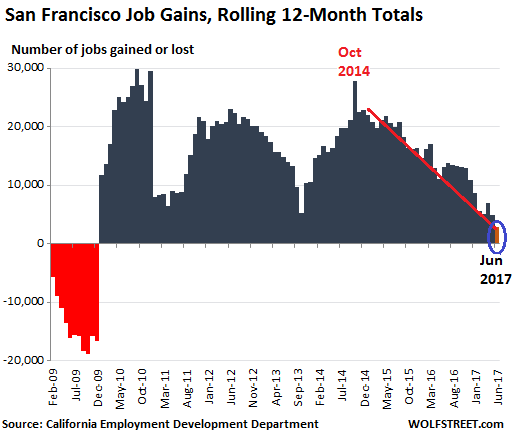 San Mateo County, just south of San Francisco on the Peninsula, is part of Silicon Valley. Given the heated rhetoric about Silicon Valley, the place should be hopping. Alas, the work force in June, at 448,400, was up only 800 souls from a year ago. The number of jobs in June fell 4,200 from the peak in December to 435,300, the lowest since June 2016 and barely above March 2016: 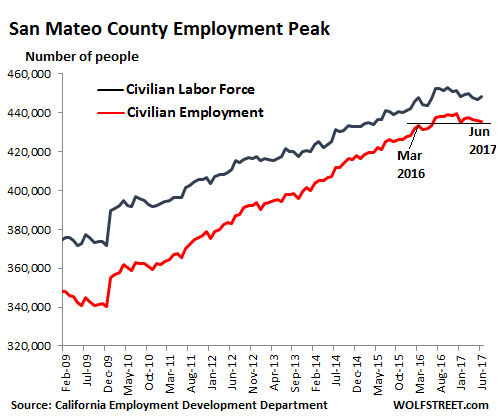 Only 2,100 jobs were created in the 12 month period, the lowest increase since the Great Recession: 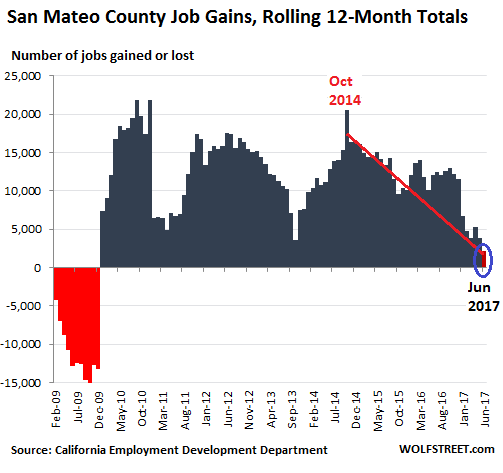 Santa Clara County is the heart of Silicon Valley. It encompasses San Jose, Santa Clara, Sunnyvale, Palo Alto, and many other hotspots with tech giants. 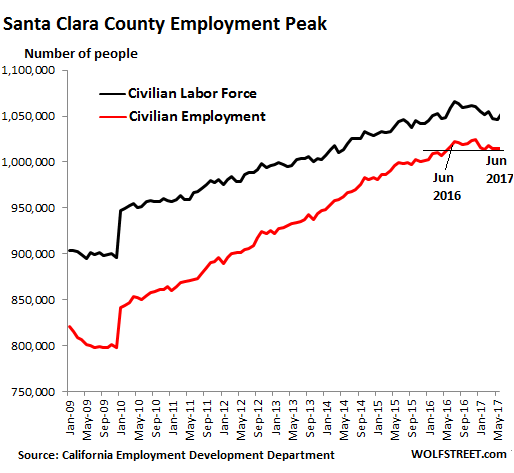 The chart below shows what has happened to the hiring boom in the largest county in the Bay Area since the Great Recession: the first red column has appeared, indicating the loss of 2,000 jobs over the 12-month period: 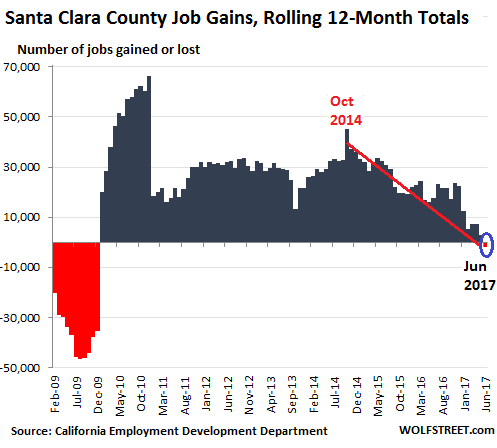 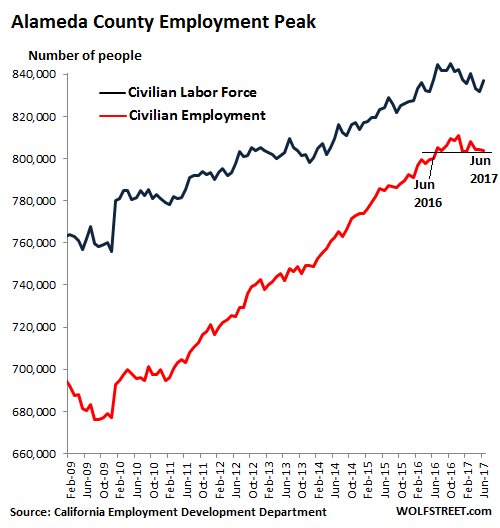 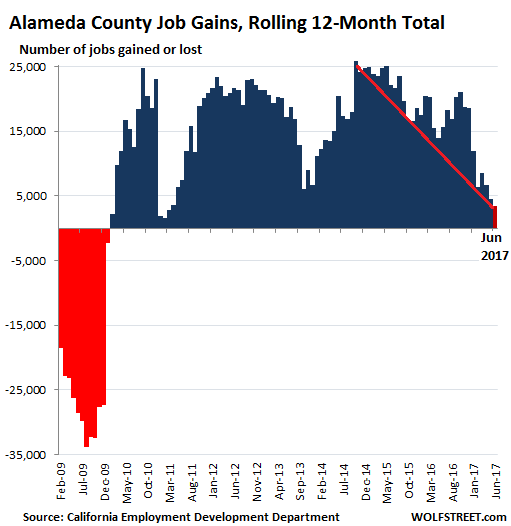 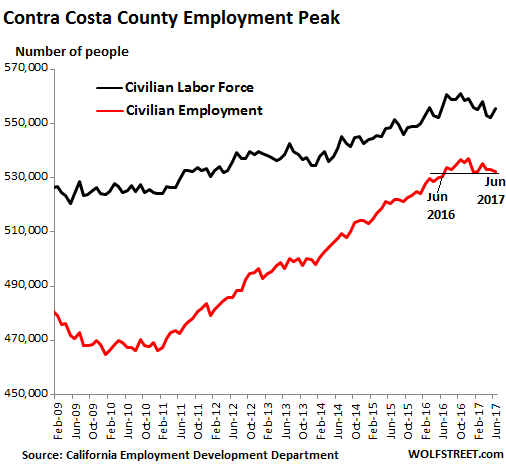 Employment inched up by 1,900 jobs year-over-year, the lowest employment growth since the Great Recession: 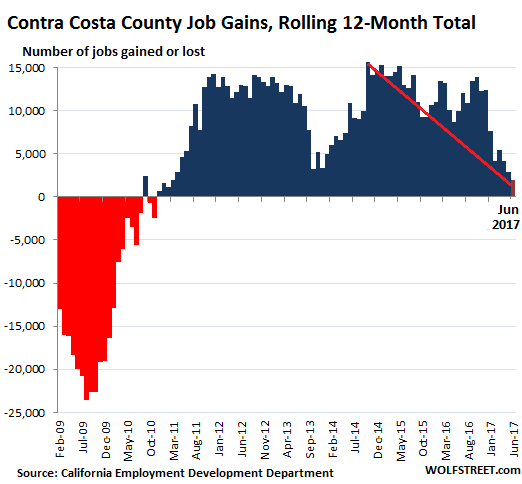 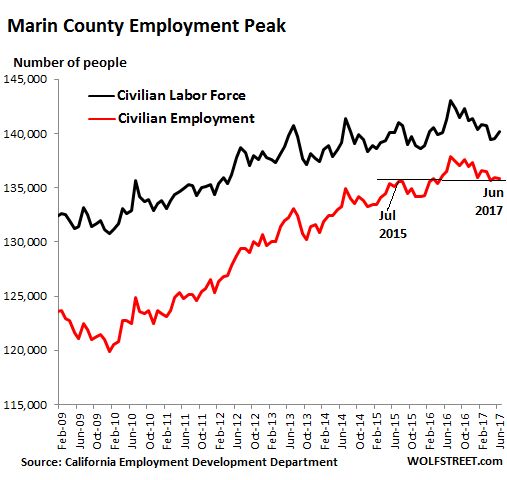 The chart below shows how rapidly the hiring boom since the Great Recession has turned into an employment decline. June was the second month in a row of year-over-year job losses – hence, the two red columns on the right: 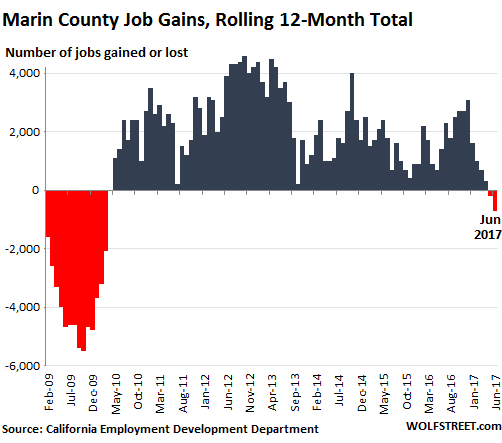 In those six counties – a phenomenal job engine and the center of VC-funded innovation – just 7,600 jobs were created over the past 12 months, with two counties, including the heart of Silicon Valley, actually shedding jobs.

The employment boom is over. The growth of the work force is over too. This will ricochet through the local economy. Workers who’ve come to this area to perform miracles cannot stick around for long if they lose their jobs. It’s simply too expensive. And startups are now folding one after the other – including former unicorns, such as Jawbone in San Francisco.

Still, their laid-off employees often get picked up by other companies. But then those companies don’t need to bring people into the Bay Area to fill those jobs.

The Bay Area is notorious for booms and busts. See the charts above. Unless a miracle happens to turn around current trends, employment will continue to weaken – and the work force, the people who live and spend their money in the local economy, will shrink. It always does; it’s too expensive for many people to hang on and wait for better times.

This has broad implications: Part of the boom in the Bay Area is the historic construction boom of commercial and residential buildings, funded by ultra-cheap money from risk-blind bankers and investors. Nearly all of the new construction is high end. The tap is still wide open, and it cannot be turned off from one day to the next. The supply will keep hitting the market for a couple more years even if developers and bankers try to turn off the tap now.

Yet companies need less space. And suddenly an unnervingly large number of for-lease signs appear, as those lining the Great America Parkway in Santa Clara.

And fewer people need to find a place to live just when overpriced high-end supply is flooding the market. At that point, the math can get ugly for real estate.

These moves hit the real economy in myriad ways. The state and local governments, which have been counting on an endlessly increasing flow of manna from that boom may find out, once again, that they’ve had some big illusions.

But there is no crisis and no crash. It’s happening during the best of times. Stocks are at record highs. Interest rates are still extremely low. So the down trend could be slow and halting, and given the enormous liquidity in the markets and still risk-blind investors, it could drag out for a disconcertingly long time.

Investors who bought the hype are left holding the bag. Read…  Another Former $2-Billion Startup Gets Rolled Up